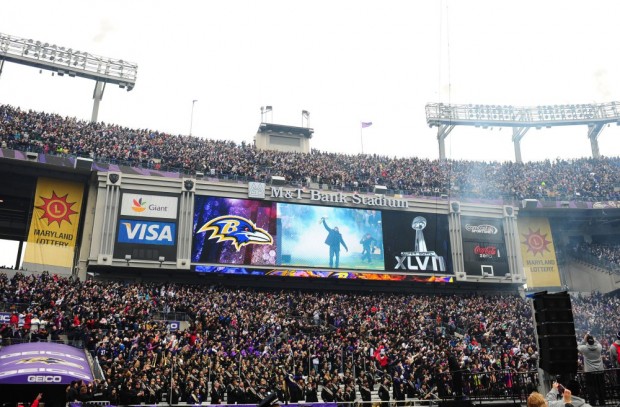 Translations of this article are also available in the following languages:EspañolFrançaisItalianoMagyarPortuguêsRomână

As a rising sport in Europe, American football has attracted interest and sponsorship from countless companies across the continent. These brands are beginning to acknowledge the untapped potential of sponsoring American football teams and organizations, as the sport not only has a diverse and loyal following, it is also growing exponentially by the day. Sponsoring American football can be one of the best decisions your organization has ever made and can help establish yourselves as an innovative, cutting-edge company that can spot societal trends as they’re happening.

We’ve compiled a list of 11 reasons why you should sponsor American football, and we think you’ll find them to be a motivating factor in your decision to contribute to this great game.

Here is the list of reasons why you should sponsor American football:

Virtually every company in the world is heavily invested in accessing the crucial 18-35 age demographic. It’s a critical age when people begin developing brand loyalties that they’ll carry with them for the rest of their lives. Things such as financial planning, insurance, consumer goods, automobiles, telecom services, beer companies and more invest billions of dollars in connecting with this target group as they begin to form strong opinions of various brands.

American football has a distinct advantage in accessing this demographic. Since the game has been growing immensely over the past 20 years, American football advocates are on average younger than those of more entrenched team sports such as soccer, rugby, or basketball. Additionally, video games like Madden NFL have built a very youthful, avid fan base of American football throughout Europe.

2. It’s a niche market, and a ravenous one at that.

American football enthusiasts in Europe are intensely committed to the growth and development of their sport. Players, fans, coaches, etc. proudly display their involvement with the game and word travels quickly through the American football community. Sponsors that can identify with this community become widely recognized and appreciated by all those involved with the sport, and since they are early adopters and mavens for American football they are therefore more inclined to become early adopters and mavens for your brand. Unlike soccer, rugby, and basketball, American football does not produce “casual” fans – it produces engaged followers that become fully-engulfed in the sport. This type of community is ideal for any company or brand.

Innovative companies understand that consumers make brand associations based on the things they’re passionate about, and if you’re involved with American football its fans are likely to be passionate about your company, too.

20 years ago there were less than 400 Senior-level (18+) teams in Europe. Today there are over 1,500 teams spread across 35 European countries, not to mention an additional 700+ Junior (15-18) or Cadet-level (12-15) teams right behind them. If that doesn’t indicate how quickly the game is growing and will continue to grow, nothing will. The sport has grown so much recently that there are now over 200 women’s teams in Europe, and an untold number of flag football organizations. Flag football is a non-contact version of the sport and it too has become a fixture in several countries. Plus, the game is incredibly popular in the United States and has risen to become the #1 sport there. This shows the game’s growth potential in a large market. Baseball, like soccer in Europe, was the most popular sport in the United States for well over 100 years until American football supplanted it approximately 20 years ago to become the most-watched and most-followed game in the country. Due to its unparalleled growth, it’s conceivable that one day American football may challenge soccer as the most popular sport on the European continent.

4. Your message is amplified and less diluted.

As an American football sponsor, you have more of a monopoly on the audience’s attention. Every top-tier soccer team has hundreds of sponsors, meaning that your message gets drowned out in all the noise. With American football you have more influence on your audience since there are fewer sponsors to contend with. When a soccer fan goes to a game and sees 300 different advertisements during the match, their attention is lost. As a team sponsor, you ideally want to enter a market where there is less competition for attention and therefore you’re able to better attract the audience to your company’s message.

5. American football is an exciting sport.

The game – unlike any other sport in existence – is played at full speed and with the highest intensity. It’s also an incredibly strategic game, often compared to chess as a very cerebral competition. Throw in the entertainment value of cheerleaders and other performers, and you have an exciting experience unlike any other. If you want to be considered a company that people get excited about, you’ll want to associate yourself with a sport that people are excited about.

6. Associate your brand with the positive values of American football.

American football has long-been appreciated for the values it instills in young adults. Toughness, teamwork, commitment, strategy, unity, and strength are all core principles of the sport. Innovative companies understand that associating themselves with well-defined principles such as these can go a long way towards developing engaged consumers and positive brand awareness. Your brand can present these qualities to its core audience simply by being associated with the right American football team.

7. Your money goes a lot further.

Spending the same amount on American football vs. soccer will provide you much more in value. For example, committing €20,000 to a team like Manchester United or Bayern Munich will get you the equivalent of a pat on the back. It means virtually nothing to a team of that stature, which eliminates over 95% of companies from sponsoring the team. However, a €20,000 sponsorship of an American football team would give you a massive role in the brand image of the team as well as “red carpet” treatment that you’re unlikely to get elsewhere. Teams will build a marketing campaign around your brand, utilize your logo and signage at every opportunity, provide free tickets to games, utilize social media mentions, and implement advertising on the team’s website. Good luck trying to get those perks from Real Madrid at that price.

8. Early entry as a pioneer of the game.

You will be a part of an ever-growing sport. Your company can be on the ground floor for the development and growth of the game. If you get involved with American football early, you’ll be more likely to have a positive long-term association with the game when it becomes massively popular among the general public. Gatorade, for example, has been one of the longest contributing sponsors of the National Football League. It has been a sponsor of the NFL since 1983 – years before it became the most popular league in the United States – and today it is the most-commonly associated brand with the NFL. Today, the NFL is the most profitable sports league in the world and Gatorade has benefited heavily from this association.

Brands like Levi’s, Chrysler, Dodge, Swarco, Raiffeisen, and New Yorker have all entered the American football market in Europe in a big way. Each has been the main sponsor for various teams in Germany and Austria, where the game is particularly strong. Teams like the Swarco Raiders Tirol of Innsbruck, the New Yorker Lions in Braunschweig, and the Raiffeisen Vikings Vienna have even incorporated their respective sponsors into their team name. It’s not only creative, it’s a win-win for both the sponsor and the team.

10. It’s a great way to access the expat community.

Many companies have targeted expatriates as potential consumers due to the incredible opportunities among these groups. When people move to a new country, they are often unfamiliar with the language, culture, and companies based in their new home. From the moment they arrive, they are developing new brand affinities and loyalties to various corporations. Companies like ING have made it a point to connect with these communities, understanding that everyone needs a bank account when they move to a new country. They’re not the only ones who do this – many companies have marketed heavily to the expatriate community to develop a bond with them as early and often as possible. Virtually every American football team in Europe has at least a few players who are expats, whether they’re from the United States, Africa, the Middle East, or elsewhere in Europe. This is a great chance for you to develop a bond with this community, both with players and fans.

American football is still an alternative sport with many fans who have little to no interest in soccer. Due to this distinction, sponsoring soccer will not give you access to this demographic, as many American football players and fans simply do not follow the game of soccer or are merely “casual” fans. If you don’t get involved, you’re missing out on a growing segment of the population that follows the game of American football. Many companies who take the mundane route of sponsoring soccer teams miss out on an important demographic that is ripe for the picking. Innovative companies who see the growth potential of American football are the ones who will reap far more benefits than anyone else.

Do you have anything else to add to this list? Are any of these reasons more compelling than others? Please feel free to contribute in the comments section below.