Translations of this article are also available in the following languages:EspañolItalianoPortuguês

NFL Europe was intended to be a proving ground for NFL hopefuls while simultaneously building interest in football throughout Europe. Though the league folded after less than two decades of existence, the NFL achieved both of those objectives to varying degrees.

Just like any developmental league, NFL Europe had some hits as well as some misses. Some players were resounding successes not only in Europe but in the National Football League as well, with a few winning Super Bowls during their careers and another becoming a 2-time Most Valuable Player. There are also several famous players who played in Europe who you likely did not know began their careers there. This is a list that highlights all of these players.

Without further ado, here are the top 10 most famous NFL Europe players:

Jon Kitna with the Barcelona Dragons in 1997.

Kitna had a very colorful career, which included stints with the Seattle Seahawks, Cincinnati Bengals, Detroit Lions, and Dallas Cowboys. He attended Central Washington University, an NAIA school (as opposed to the NCAA) and did not play under an athletic scholarship. He went undrafted, but later signed to the Seahawks practice squad and was sent to play for the Barcelona Dragons in 1997 to gain some additional game experience. During his lone season in NFL Europe, the Dragons won the World Bowl Championship over the Rhein Fire, 38-24, and Kitna was awarded the World Bowl MVP award. Kitna followed that up with a long career in the NFL, which included 29,745 passing yards and 169 TDs over 14 seasons, including two playoff appearances. Not bad for a guy who was never offered an athletic scholarship and went undrafted.

Neither of these guys had Hall of Fame careers, but if we’re talking about the most famous names then both of them deserve mention. By some lucky coincidence, both of these men have appeared as spokesmen for Old Spice, and each played in NFL Europe during the mid-to-late 90’s. What made both men famous is that Old Spice designed very unique advertising campaigns around their respective physiques, emphasizing a very whimsical humor in doing so. Anyone that’s seen the ad campaigns can’t help but remember them, as they’re both clever and utterly hilarious.

Terry Crews was a defensive end out of Western Michigan who was selected in the 11th round of the 1991 NFL Draft as the 281st pick (back when the NFL Draft lasted twelve rounds instead of seven) by the Los Angeles Rams. He bounced around to four different NFL teams in four seasons (Rams, San Diego Chargers, Washington Redskins, and Philadelphia Eagles, respectively), and made a short stop in NFL Europe as a member of the Rhein Fire during the 1995 season. Isaiah Mustafa was an undrafted wide receiver out of Arizona State, who was signed to various practice squads (Tennesee Oilers, Oakland Raiders, and Cleveland Browns) over a 4-year career. He was sent to NFL Europe to play for the Barcelona Dragons during the 1998 season and returned to the NFL later that year.

To see the Old Spice hilariousness, check out these clips: The Man Your Man Could Smell Like and Get Shaved in the Face.

Dante Hall with the Scottish Claymores in 2001

Dante Hall had a legendary career during his time in the league. Nicknamed “The Human Joystick”, he became the top return man in the NFL for a 3-4 year stretch while playing for the Kansas City Chiefs. Hall also had an adequate career as a wide receiver, bringing his explosiveness and electrifying play to the offensive side of the ball. Hall spent seven seasons with the Chiefs and two with the St. Louis Rams, meanwhile forcing teams to gameplan around his unique abilities. During the 2003 season, he returned a kick for a touchdown in four straight games, still an NFL record. His lone season in NFL Europe was in 2001 following his rookie year with the Chiefs. He played for the Scottish Claymores, catching 5 touchdowns and serving as the team’s primary return man. His NFL career took off shortly after returning from Europe. He’s still considered one of the greatest return men in NFL history.

To see some of Dante’s highlights from the 2003 season, click here. 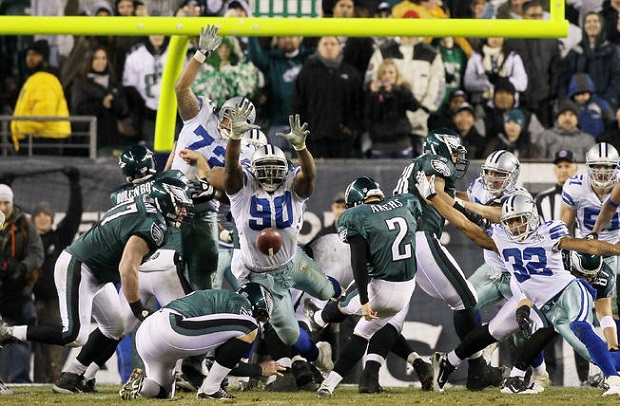 Akers was a member of the Berlin Thunder during the 1999 NFL Europe season after brief stints with the Atlanta Falcons, Carolina Panthers, and Washington Redskins. Later that year, he returned to the NFL where he started an All-Pro career with the Philadelphia Eagles which spanned 17 seasons, 12 of those with the Eagles. During that time, Akers was selected for the Pro Bowl and named All-Pro 6 times each. During his 17 NFL seasons his teams made the playoffs 11 times, while he amassed 39 converted field goals during that time and making it to Super Bowl XXXIX before losing to the New England Patriots. He was selected to the “NFL 2000s All-Decade Team” and broke multiple records including the record for points scored in a season by a kicker and the record for field goals in a season. He’s also kicked a 63-yard field goal, tied for second longest in NFL history. 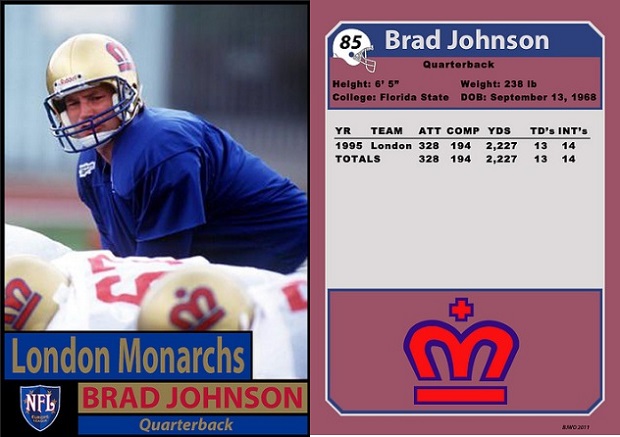 Johnson was the first quarterback to play in Europe that won a Super Bowl. Early in his career he was sent to play for the London Monarchs of the World League of American Football (later re-branded as NFL Europe), spending the 1995 season with the team. In his only year with the Monarchs, Johnson led all quarterbacks in completions going 194 of 328 for 2,227 yards and 13 touchdowns. Johnson spent 1992-1998 with the Minnesota Vikings, 1999-2000 and 2005-2006, with the Washington Redskins, 2001-2004 with the Tampa Bay Buccaneers, and 2007-2008 with the Dallas Cowboys. He won the Super Bowl XXXVII as a member of the Bucs at the end of the 2002 season. He held a 72-53 record as a starter in the NFL, completing over 60% of his passes for a record 13 straight seasons. 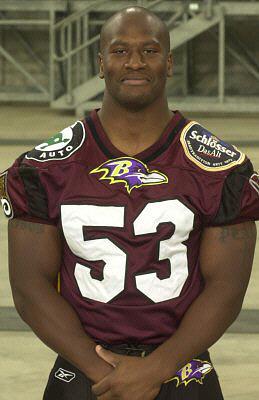 James Harrison with the Rhein Fire in 2004

Harrison went undrafted out of Kent State during the 2002 NFL Draft. He was believed to be undersized – too short to play linebacker (6’0″) and too light to play defensive line (240 lbs.). Early in his career, Harrison bounced back and forth between the Pittsburgh Steelers and Baltimore Ravens, the latter sending him to play for NFL Europe’s Rhein Fire during the 2004 season. His team had a subpar season, finishing 3-7 and missing out on the playoffs, but Harrison would go on to have a very successful career with the Steelers, registering 647 tackles, 29 forced fumbles, and 6 interceptions during his 13+ year career. He won two Super Bowl titles (XL & XLIII) with the Steelers, with the highlight of his career coming on a 100-yard interception return for a touchdown during Super Bowl XLIII as time expired in the first half. It was one of the greatest plays in NFL history. The quarterback he intercepted? Another former NFL Europe player by the name of Kurt Warner. 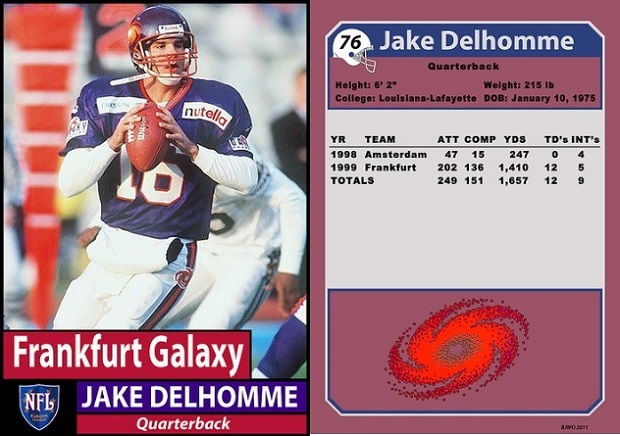 Jake Delhomme is the Carolina Panthers’ all-time leader in pass completions and pass attempts, and a 1999 World Bowl champion with the Frankfurt Galaxy. He’s the only player on this list two have played more than one season in Europe, and coincidentally he was also the backup to Kurt Warner while he was with the Amsterdam Admirals in 1998. Delhomme struggled for playing time early in his career with the New Orleans Saints, but was finally given an opportunity to start for the Carolina Panthers, taking them to the Super Bowl in his very first season with the team in 2003. The Panthers lost that Super Bowl (XXXVIII) to the New England Patriots in a barnburner, 32-29. In that game, Delhomme completed an 85-yard touchdown to Muhsin Muhammad, an NFL record. Delhomme finished his career with 20,975 passing yards and 126 touchdowns. 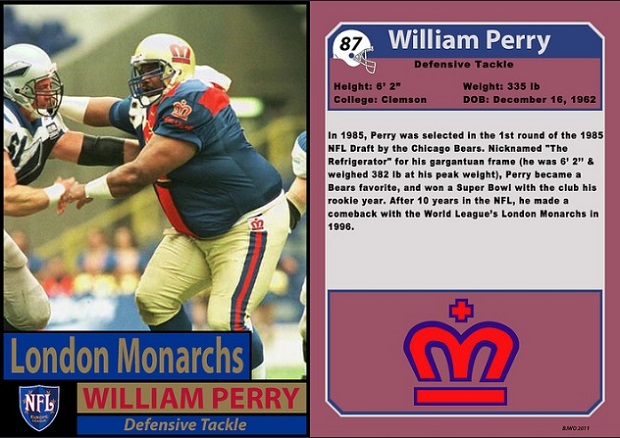 For those that were around to watch the NFL during the 1980’s, they know that Perry was a sensation while he was playing for the Chicago Bears. Nicknamed “The Fridge”, he lived up to it – weighing in at 335 lbs. (152 kg). He is most famous for two things: “The Super Bowl Shuffle” (a rap song and video created by the Bears during the 1985 season) and scoring a rushing touchdown during Super Bowl XX. The 1985 Bears team is one of the most famous in history, going 15-1 and winning the Super Bowl over the New England Patriots by a lopsided margin of 46-10. That team had great players on its roster such as Walter Payton, Jim McMahon, and Mike Singletary, among others. “The Fridge” played in the WLAF for the London Monarchs during an attempted comeback in 1996, the only player on this list to play in Europe at the end of his career rather than at the beginning. 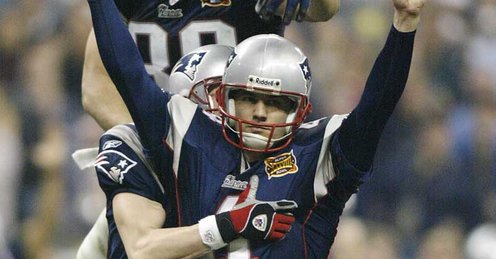 NFL Europe produced some pretty great kickers (David Akers, Lawrence Tynes, Chris Hanson, etc.), but none greater than Adam Vinatieri. Considered by many to be the greatest kicker in NFL history and unquestionably the most clutch, Vinatieri is a 4-time Super Bowl champion, and played an integral part in each of them. He’s the first kicker to ever win four Super Bowls, and kicked the winning field goal in two of them. Vinatieri spent the 1995 season with the Amsterdam Admirals of the WLAF, making it to the World Bowl before falling to the Frankfurt Galaxy. Today Vinatieri plays for the Indianapolis Colts, but he is best known for his success with the New England Patriots, where he played for 10 seasons.

Kurt Warner with the Amsterdam Admirals in 1998

There is no player more associated with NFL Europe than Kurt Warner. Rising from obscurity playing for the Iowa Barnstormers of the Arena Football League while stocking shelves in a grocery store during the offseason, Warner was signed by the St. Louis Rams in 1998 and immediately sent to play for the Amsterdam Admirals. During his lone season with the Admirals, Warner led the league in passing yards and touchdowns. His 1999 season with the Rams was the stuff of legend. After starting quarterback Trent Green went down with an injury during the preseason, Warner led the Rams to a 13-3 season and a Super Bowl victory. He won regular season and Super Bowl MVP honors that season, and would subsequently win the MVP again in 2001, a year which culminated in a last-second loss to the New England Patriots. After his meteoric rise gave way to an epic personal collapse, he again regained form and led the Arizona Cardinals to the brink of their first Super Bowl victory during the 2008 season, losing narrowly to the Pittsburgh Steelers on a last-second touchdown, 27-23. In total, Warner made it to 3 Super Bowls, winning one, won 2 MVPs, a Super Bowl MVP, played in 4 Pro Bowls, and set several NFL records that have remained unbroken today. Not bad for a guy who was stocking shelves just a few years prior. Here are some of his career highlights.

Warner is now up for eligibility to the Pro Football Hall of Fame, and is almost a sure lock to make it in on the first ballot. In doing so, he’ll become the first former NFL Europe player to be elected to the Hall of Fame.

How did you feel about this list? Are there any honorable mentions you care to acknowledge? Let’s discuss in the comments below.