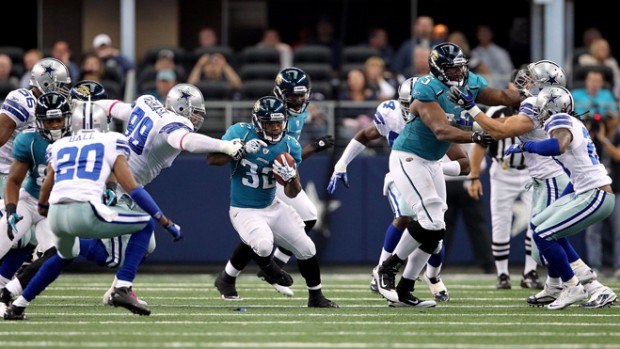 In August 2012, the Jacksonville Jaguars announced that they will be playing four home games in London from 2013 to 2016 as part of the NFL International Series. Sunday’s game against the Dallas Cowboys will be the Jags’ second game in the series when the two teams square off at Wembley Stadium.

The Cowboys, on the other hand, will be playing their very first game in London. Still, with a long history of success and a string of three Super Bowl victories during the mid 90’s, the Cowboys have a substantial following in the United Kingdom. The Jaguars have been investing heavily in building fan and sponsorship support in the U.K., even hiring a fulltime director based in London to expand partnership and fan opportunities. They’ve been one of the teams rumored to be interested in a potential move to London. There should be tremendous support for both teams and NFL games at Wembley always have a special atmosphere.

The Jaguars (1-8) have had the type of season that many expected they would have. They’ve been in a rebuilding mode for the past three seasons, as indicated by their 7-34 record during that span. However after a very rough start to the season, the Jags have been very competitive in their last 5 games…including a 24-6 defeat of the Cleveland Browns (6-3) in Week 7. They’ve shown signs of improvement and toughness despite a very difficult schedule, with 7 of their 9 games coming against teams with a winning record. Sunday’s game against the Cowboys will make it 8 of 10.

Jacksonville rookie quarterback Black Bortles has had flashes of brilliance at times, giving Jaguars fans a hope for solidity at the position for the first time in years. However, Bortles has had difficulty protecting the football, averaging more than 2 turnovers per game during his six starts. With so much parity and talent in the NFL, protecting the football is an absolute must – the team with a positive turnover ratio typically wins the vast majority of games. Bortles has a good young receiving corps in Allen Robinson, Allen Hurns, and Cecil Shorts III. Denard Robinson has been the lone bright spot in the backfield, averaging 5.0 yards per carry this season. Newly acquired running back Toby Gerhart has been a letdown this season after playing alongside Adrian Peterson in Minnesota. The Jags defense currently ranks 30th in the league, ahead of only the Jets and Buccaneers.

The Cowboys (6-3) had a 6-game winning streak snapped during a Week 8 overtime home loss to the Washington Redskins. They followed that up with a 28-17 loss to the Arizona Cardinals in Week 9, though the Cardinals currently have the best record in the NFL and are the league’s only 1-loss team.

Quarterback Tony Romo has been dealing with a back injury and missed last week’s game against the Arizona Cardinals. He’s listed as probable for the game at Wembley, but participated in full practice on Friday and is likely to play. He currently ranks fifth in passer rating this season (103.6) and third in completion percentage (68.2%). Running back DeMarco Murray leads the NFL in rushing yards by a wide margin, entering Sunday’s contest with 1,133 rushing yards. Romo’s top target has been Dez Bryant who has 50 receptions for 635 yards and 6 touchdowns so far this year. The Cowboys defense has ranked below average this season, but its offense has been so high-powered that the defense has only needed to be adequate.

The Cowboys are clearly the favorites in this game, however a Jaguars win is not out of the question. The Jags have a distinct advantage of having played in London before. Perhaps the Jaguars will someday call London its permanent home, and an upset win over the Cowboys at Wembley could go a long way to building a loyal fan base ahead of their arrival.