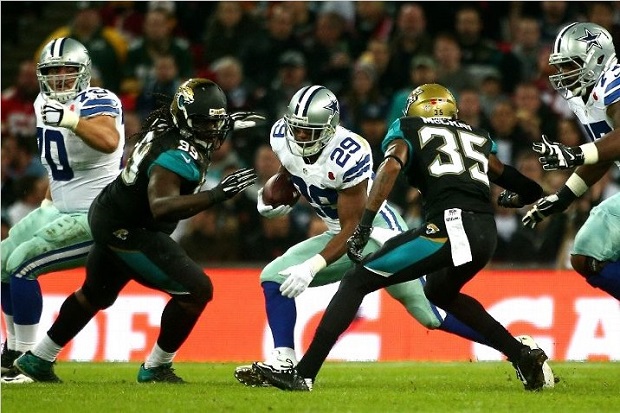 The Dallas Cowboys faced the Jacksonville Jaguars at Wembley Stadium in London on November 9th, 2014. (Photo by Charlie Crowhurt/Getty Images)

Turnovers were the name of the game at Wembley Stadium in London on Sunday. The Dallas Cowboys overcame an early deficit to defeat the Jacksonville Jaguars 31-17 in the final game of the 2014 NFL International Series. The series will return again next year with a fresh slate of 3 games.

The win snaps a 2-game skid for the Cowboys and takes them to 7-3 on the season, top of the NFC East ahead of the Philadelphia Eagles’ Monday night game against the Carolina Panthers. Meanwhile, the Jags extend their losing streak to 3 games and are now 1-9 on the season.

Both teams started out strong offensively, with the Cowboys taking the ball down the field before converting on a 54-yard field goal by Dan Bailey. DeMarco Murray got off to a hot start to begin the game on a day that he reached 100 yards rushing for the ninth time in ten games. Very quickly, however, the Jaguars marched 80 yards in 9 plays, capping off the drive with a 32-yard touchdown run by running back Denard Robinson. The Jaguars went up 7-3 in what would be their only lead of the day.

After an excellent defensive stand by the Jaguars on the Cowboys’ next possession, Dallas punted to Ace Sanders who muffed the ball at the 10-yard line, where the Cowboys recovered. Three plays later, quarterback Tony Romo hit tight end Jason Witten for a 2-yard touchdown. Bailey nailed the extra point and the Cowboys were suddenly up 10-7. It was a huge swing of momentum, as the Jaguars were prepared to take back the ball with the lead but instead gave up a touchdown. They never recovered from there.

The Cowboys then took over the game in the 2nd quarter with two touchdown passes from Tony Romo to wide receiver Dez Bryant for 35 and 68 yards, respectively. The Cowboys went into halftime with a commanding 24-7 lead. Dez Bryant finished the day with 6 receptions for 158 yards and 2 touchdowns, all of which came in the 1st half.

Prior to Bryant’s second touchdown, the Jaguars drove the ball into Dallas territory. Trailing only 17-7, quarterback Blake Bortles completed a pass to Cecil Shorts III for 53 yards to the Cowboys’ 35 yard line. However, on the very next play, Robinson fumbled the ball back to the Cowboys to kill the drive. It was again a major shift in momentum for the Jaguars.

Then the Cowboys broke the Jaguars’ back at the end of the 1st half with a 68-yard touchdown to Dez Bryant with 19 seconds remaining in the 2nd quarter.

The second half was mostly played on cruise control for the Cowboys, who added a touchdown in the 3rd quarter to make it 31-7. Joseph Randle, spelling a fatigued Murray for a play, ran up the right side of the Jaguars’ defense for a 40 yard touchdown. The Jaguars struggled to get much going in the 3rd quarter and did not score again until midway through the fourth quarter with a safety – Kyle Wilber was called for a holding penalty in the end zone on a punt and the Jaguars were down 31-9 at that point. A Denard Robinson touchdown with 1:53 remaining capped off the scoring for the day, with a 2-point conversion completed on a pass from Bortles to receiver Allen Robinson. That made the score 31-17, the final for the day.

The Jaguars looked very competitive in the first half against the NFC East leaders, however key mistakes and turnovers cost them greatly. This has been a common theme with the Jaguars this year, who have turned the ball over 22 times this season, most in the league. Bortles – who has been responsible for the vast majority of Jaguars turnovers this season – did an adequate job of protecting the football, only giving up an interception in the 4th quarter in an attempted comeback. Still, the two fumbles in the first half and 28 unanswered points by the Cowboys proved to be impossible to overcome for the Jags.

Bortles had one of his best games of the season passing, completing 22 of 37 for 290 yards. He hit Cecil Shorts for 5 catches and 119 total yards, though Shorts left in the 2nd half with an injury. Running back Denard Robinson finished with 60 yards on 15 carries and 2 TDs, also giving up the crucial fumble in the 2nd quarter.

For the Cowboys, Dez Bryant had a field day in the first half but was completely quiet in the second half. Bryant is best with the ball in his hand, proving an unwillingness to be brought down by opposing defenders. On both touchdown passes he broke multiple tackles to get into the end zone. Tony Romo finished 20 of 27 for 246 yards and three touchdowns. NFL leading rusher DeMarco Murray finished the day with 100 yards on 19 carries, putting him at 1,233 for the year.

Fox color commentator Darryl Johnston mentioned that there are now over 35,000 members of the Union Jax in the United Kingdom, up from 22,500 just a year ago. The Union Jax are the Jaguars’ fan club in the U.K. In the last two years, they’ve risen from 30th to 9th in popularity in the U.K., showing that their “four games in four years” agreement is genuinely paying off.

83,603 fans were in attendance, another sold out crowd at Wembley Stadium. The Jags had hoped for a better result, but were encouraged by the fan support. Both teams have a bye week next week to compensate for travel time and time zone change. The Cowboys face the New York Giants on the road in a Week 12 matchup, while the Jaguars will travel to Lucas Oil Stadium to face the Indianapolis Colts.