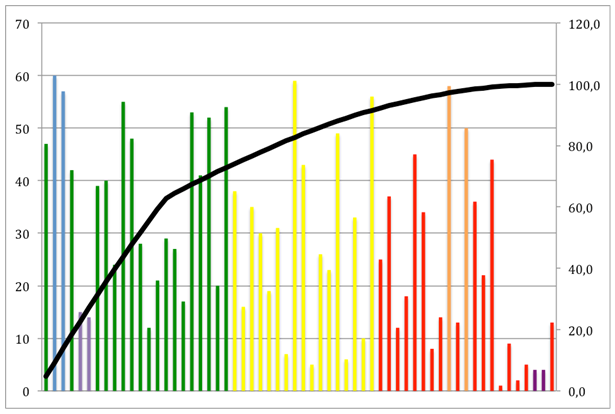 A team’s playbook can be the deciding factor between winning a championship and finishing at the bottom of a division. A good playbook should be well-balanced and difficult for opponents to decipher, yet easy enough for the team to understand and absorb quickly. Once an offense has determined its marquee plays, it becomes the coach’s task to mix up his game script in order to avoid predictability. Knowing which calls to make in certain situations should be the objective for every coaching staff that wants to win its next title. In this article, we’ll look at how a tool known as the ABC analysis can help achieve this goal.

An ABC analysis is used to structure large amounts of data in order to give a comprehensive overview of the particular model. It can then act as a supplement for managers (or in our case, coaches) trying to improve and optimize their respective output.

The data is typically divided into three classes, whereby class A accounts for 70 percent of the data, class B accounts for 20 percent, and class C accounts for 10 percent. If done correctly, this analysis can help increase financial efficiency, distinguish between important matters, and avoid inefficient projects.

Please note: the ABC analysis is merely quantitative, relying solely on historical data which leaves intangible factors unaccounted for. Moreover, it only yields data on the present status of an organization, not a futuristic view.

Before we get started, it’s important to know that a large amount of data is required prior to conducting this analysis. It is recommended to record the results of at least 250 plays before beginning, in order to provide a good overview of the coach’s tendencies. With this information, a coaching staff can better determine which plays to continue to use and identify which ones to abandon. This feedback allows them to create a new playbook without having to start from scratch.

For the purpose of this experiment, sixty different plays were analyzed, each with a random numbers of yards and frequencies assigned. Based on those numbers, the following graph was created using Excel.

Please note: this is just an example and an analysis of real plays can lead to a completely different graph. If you are unfamiliar with performing an ABC analysis, please feel free to watch this tutorial video.

The colored bars represent the frequency – how many times it was called – of a certain play and is measured on the left vertical axis. The black line represents the cumulative yardage gained by all plays (in terms of percentage) and can be read from the right vertical axis. Each play accounts for a certain fraction of total yards gained and the sum of these percentage values is represented by this line. By sorting these ratios, the most effective plays can be segmented and separated from the least efficient.

Using this method, the plays are now divided into three groups. Group A accounts for 70 percent of all yards, whereas Group B and Group C only contribute 20 and 10 percent to the total, respectively. The other colors are statistical outliers and will be explained later.

In our example, only a third of the overall plays generated approximately seventy percent of all yards gained. This indicates that the vast majority of plays contribute very little, if any, to the total yardage. In other words, there is a nucleus of plays that generate most of the yards, while the rest are use only in very distinct situations. This creates an opportunity for good defensive coordinators to watch film and predict which plays will be called in certain situations, leaving an offense susceptible to being completely shut down when limited to just these options.

To avoid this, it is wise to introduce variety during the second half of a season. Having conducted an ABC analysis, we can now concentrate on four special groups of plays: successful plays that were called often (Group 1), plays which generated a lot of yards but were seldomly called (Group 2), plays that were called often but produced a low average of yards per play (Group 3), and those that were unsuccessful and generated very few yards (Group 4). (The colors of each font represent the bars in the graph above)

First, we will look at the plays from Group 1. Those, along with the plays from Group 2, belong to the group of plays that generated the majority of yards. These are the surefire options you can rely on when you’re in need of a crucial first down or a big play. However, overusing them can tip defenses off. Thus, the best solution is to gradually decrease the frequency of these plays and eventually substitute them with “hidden gems” from Group 2 or new plays. Before doing so, analyze the factors that made those plays successful and integrate them into new plays.

Prior to increasingly featuring plays from Group 2 into your repertoire, you should look at the cause behind why these plays generated a lot of yards, yet were only called so infrequently. It could be that these plays were only called in long distance situations or various anomalies, such as breaking a simple run into a long touchdown. If this is not the case however, it is definitely advised to implement them more often.

Plays from Group 3 and 4 share this commonality: if they are not plays designed for short yardage situations, you should consider eliminating them. However, before doing so coaches should look at each play and identify why they did not succeed. Perhaps with a small adjustment, there is potential to generate positive gains from these plays.

All in all, this type of analysis provides a useful analytical overview of your offense’s performance. However, this model is not the answer to perfect play calling: a lot of further analysis must be done in order to make sense of the graph and draw practical conclusions.

Moreover, there is significant opportunity for coaching staffs to conduct a more detailed ABC analysis than the one highlighted in this article. Instead of comparing all plays broadly, one can choose to segment by a certain situation or against a specific defensive scheme in order to obtain additional insights.