Concern over the safety of playing American football can create legitimate reservations in the minds of both players and loved ones. Now of all times, with all the sophisticated knowledge and science surrounding injuries associated with the sport, organizations and players must treat safety with the utmost respect.

Not coincidentally, in early 2016, the Danish American Football Federation (DAFF) broke ground in Denmark by proactively addressing the issue of player safety. DAFF wrote to every team in Denmark to emphasize the importance of safety and to give a directive to teams that the well-being of their players is their top priority.

DAFF did not merely write a letter that said all the right things regarding player safety. It also provided Danish teams with numerous resources so that team leaders, players could fully educate themselves with the most up-to-date and helpful information about injury prevention.

Specifically, DAFF sent every team in Denmark a two-page pamphlet which discussed the dangers associated with concussions – something about which nearly everyone involved in the sport of American football knows – but which effectively articulated the symptoms of concussions, warning signs for coaches and parents to look for, and clear steps to take should it seem as if a player has sustained a concussion. The document is extremely thorough, helpful, and preventative in its nature. Even more important than its preventative tone is the fact that the information is presented in a way that makes it accessible to people who know nothing about American football or concussions.

The Holstebro Dragons, under the leadership of team president Jens Rudbeck and head coach Dan Ruiz, have quickly and directly responded. In his first year coaching the Dragons, Coach Ruiz has thus far led the surging team to a 5-1 record. They are on track to finish the regular season in similar fashion. This is impressive enough, but even more so considering the fact that this is their first year playing in the first division in Denmark. Their only loss has come at the hands of the defending national champions. In 2015, the Dragons went undefeated and won the Division 2 National Championship.

With the genuine concern for their players at the forefront of their minds, the Dragons’ leadership took clear and decisive steps to appropriately respond to DAFF’s imperatives. In doing so, the Dragons have distinguished themselves in Denmark and established themselves as a model example for all teams in Denmark, and Europe.

What the team did was very simple and effective – they instituted the use of Guardian Caps at practice. 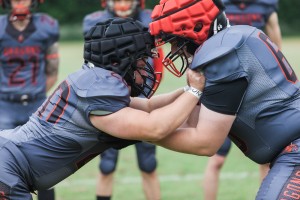 Guardian Caps are protective covers that can be fitted onto any American football helmet. They not only offer added protection to a player’s head, but also to the rest of his or her body by reducing the impact forces, soundwave frequencies, and vibrations resulting from being hit by the helmet of another player. They are brilliant in their simplicity and their effectiveness.

“My guys were fired up about getting the chance to use a new product from the United States which gives them some added protection at practice,” explains Dragons’ head coach Dan Ruiz. “We are honored to be the first team in Europe to use Guardian Caps. Football is still a fairly new sport in Denmark so parents are most concerned with the contact that comes with it. Thanks to Guardian, we now have help making practices safer for our players and this is going to make the parents much happier.”

Guardian is unique among manufacturers of American football equipment – the entire focus of the company is on player safety and re-engineering sports equipment with advanced materials. 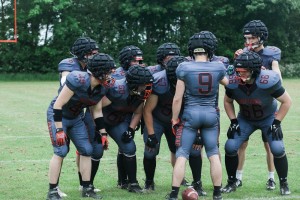 “Guardian has definitely made our practices safer,” notes Thomas Sorensen, team captain and defensive end for the Dragons. “They’re great to use and I think Guardian has the game moving in the right direction.”

Dragons’ starting quarterback Matt Reyes reiterated the same. “I think it’s great that Guardian Caps are reaching Europe because that means the sport itself is growing. Player safety is of the utmost importance in football, and Guardian Caps are definitely a great way to enhance safety. Now players can feel safe while learning proper tackling techniques.”

It’s no surprise that more and more big-name teams in the United States are instructing their players to wear Guardian Caps at practice – teams like Clemson, the only NCAA Division 1 team to go undefeated in 2015 and who came within a hair of winning the national championship. 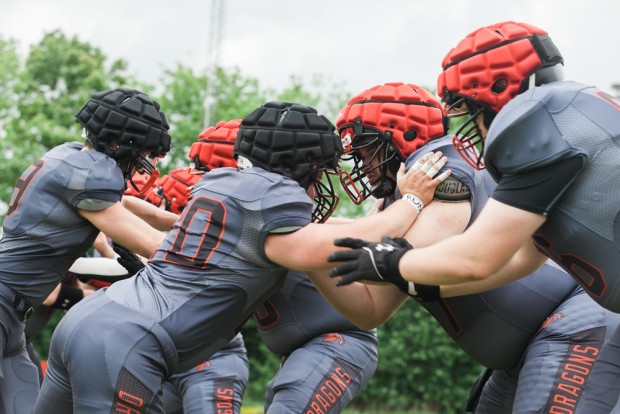 It is no disservice to the sport of American football to acknowledge its risks. In fact, honestly appraising and addressing associated risks makes the sport more appealing. Nervous parents and other loved-ones are likely to be supportive of the sport if they understand that the game is not inherently dangerous when played properly. Apprehensive players will continue playing if they know that their personal safety is their coach’s top priority. 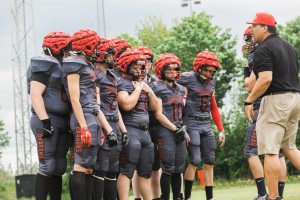 This is exactly why DAFF’s approach to player safety is so important and why it should be applauded by anyone who takes player safety seriously. It is also why the Holstebro Dragons should be recognized for being one of the first teams in Europe to use Guardian Caps in addition to their other efforts to meet its federation’s safety mandates for a truly comprehensive approach.

And let us not forget how important Guardian is to this equation – the company is literally making American football safer, and therefore, more appealing to so many people worldwide who are on the fence about joining the sport or who are considering prohibiting their children from joining the sport. With Guardian Caps, there is now a simple and direct way to proactively and effectively enhance player safety, as no other company does what they do.

At The Growth of a Game, we are dedicated to facilitating the growth of American football. We recognize that one of the most effective ways to facilitate such growth is by mitigating the concerns of new players and their loved ones – most importantly, their concerns regarding safety. The Danish American Football Federation, the Holstebro Dragons, and Guardian have all done their part to make the sport safer.