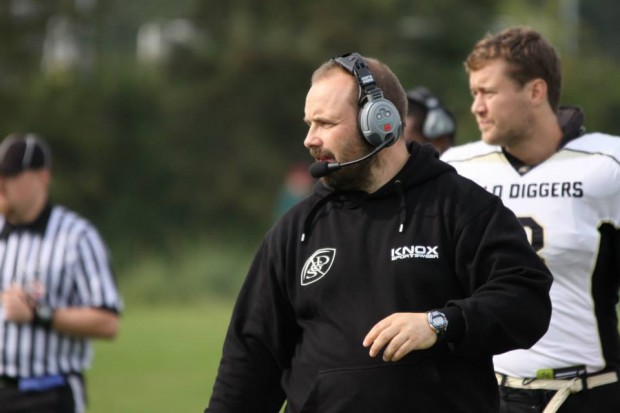 I knew how committed Kim Ewé was to coaching after he had to postpone our first interview so he could finish reviewing film. “I have to make sure my practice plan is ready,” he says. “I use Hudl a lot. Do you know it? It’s my lifeblood.”

If you needed any convincing that the game of American football is in a heavy growth stage, just consider this: Ewé, a Danish national, is currently coaching professionally for the Castelfranco Cavaliers, an Italian team located just outside the fabled city of Venice.

Ewé isn’t just there to see the breathtaking sights, though. He’s there to take care of business.

While he’s turning only 42 years old this year, Ewé’s history with the game has been long and prosperous. At 15, he began playing for the Copenhagen Vikings as a wide receiver, his first foray into American football. After the Vikings folded the following season, his mother Sanne (future founder of the Danish American Football Federation) decided to step in and found a new team called the Copenhagen Towers, in which Ewé ultimately played and coached for six seasons. As a player, Ewé and the Towers won four consecutive Mermaid Bowls (Denmark’s national championship of American football, a reference to the famous children’s story “The Little Mermaid” by Danish author Hans Christian Andersen) from 1992 to 1995. Meanwhile he embarked on his coaching career, guiding the Towers’ U19 team as head coach for the entire duration that he was with the club.

In 1996, Ewé moved from Copenhagen to Helsingør, a city 45km north of the Danish capital. He also changed teams to the Kronborg Knights, who were an up-and-coming club with a lot of excitement surrounding their development. He assumed the same responsibilities he had with the Towers, and the Knights made the Mermaid Bowl in three consecutive seasons from 1997-1999, falling just short of the championship in all three. During that time, his senior-level coaching career also took off in 1998 when he became the wide receivers coach for the Danish National team.

In 2000 he was named head coach of the Avedøre Monarchs – a 9×9 team in the suburbs of Copenhagen – at only 26 years old. The Monarchs won the 9×9 championship in his first season as head coach, then jumped two divisions when the league expanded to move up to the Danish National League. In 2001, the team’s first year in the country’s top division, they reached the Mermaid Bowl before losing to the Roskilde Kings, 17-10. He retired from playing that same year, choosing instead to focus completely on his coaching duties. It paid off the following season in 2002, as the Monarchs won their first ever Mermaid Bowl, a 28-14 triumph over the defending champion Roskilde Kings. It was also Ewé’s first Mermaid Bowl victory as a head coach. He had climbed to the pinnacle of Danish football, and he had just turned 29 years old.

After three consecutive national championships with the Avedøre Monarchs, Ewé accepted the head coaching position in 2007 with the Søllerød Gold Diggers, located on the northern outskirts of Copenhagen. “The Gold Diggers were a brand new team in the Danish 1st division [the 2nd highest level in Denmark],” explains Ewé. “I liked what they were doing and I really enjoy the process of building up teams. Plus, it was a professional environment which appealed to me as a coach.” After not having won a game the previous two seasons, the Gold Diggers won the Danish 1st division in his first year with the club, followed up by an appearance in the Mermaid Bowl in 2008. The Gold Diggers lost to the defending champion Triangle Razorbacks, 55-24, but Ewé had now taken two separate clubs from the lower divisions to the Danish national championship game in just two seasons. 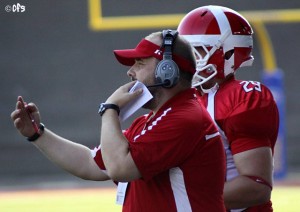 The Gold Diggers won their first of two consecutive Mermaid Bowls the following season in 2009, and by the time he left the team in 2014 he had guided them to five championship game appearances. In European competition, the Gold Diggers won the EFAF Cup in 2012 and lost in the quarterfinals to the Vienna Vikings in 2013. Ewé was elected to the Danish American football Hall of Fame as a player in 2011, and also served as the defensive coordinator and assistant head coach for the Danish national team since 2008, a position he still holds to this day.

The Gold Diggers were paying for Ewé’s expenses during this time, but not a coaching salary. After deciding to make the move to coaching full-time, he began looking at opportunities within Denmark and the United States. That was when the Castelfranco Cavaliers contacted Ewé on Europlayers. The Cavaliers are a team in the Italian 2nd division seeking to advance to the 1st division in the coming years. “They liked my resumé and mentioned that it would be good to have a European coach. I went down to visit them to see how they were and I felt that they were a quality organization.” After some initial discussions, Ewé and the Cavaliers agreed on a one-year contract with a verbal agreement for an additional two years.

“Instead of Playing for Pizza, I’m coaching for pizza,” jokes Ewé, referencing the 2007 John Grisham novel of the same name (Amazon: USA/UK/FR/ES/DE/IT). In addition to Ewé, the Cavaliers also have two Italian assistant coaches and a retired American expatriate who have helped cover ground on the coaching staff. “I like being the primary coach rather than having a large staff. I enjoy developing coaches as well as developing players into coaches, and keeping a small staff allows me to do that.”

Ewé has a very refreshing philosophy on coaching. “It’s never been about winning for me. It’s never really been my goal to win a championship. My goal is to make better players and better coaches. Right now, our mantra as a team is pretty simple: get better. If the by-product of that attitude is a championship, then that’s all the better.”

The Cavaliers had gone winless at home in the previous two seasons. In Ewé’s first game as head coach, the Cavaliers defeated their rival the Vicenza Hurricanes 34-8 in Castelfranco Veneto, breaking the streak. 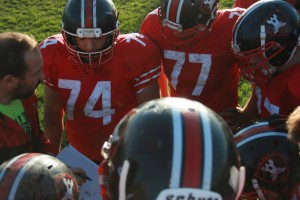 The team is four years old and had a lot to learn from Ewé. “They had lots of bad habits and had to learn how to practice football properly,” explains Ewé. “They were used to just putting on helmets and playing against each other for two hours. Once we began instituting a regimented practice routine and educating the players, the results were impressive.”

“We’re pretty good passing-wise. We’re a bit small on the lines, but we make up for it with a lot of heart and soul. We don’t currently have any import players, but that could change in the future.”

“It’s been a pretty easy transition. Northern Italy has more of a Germanic/Scandinavian mindset. The biggest challenge has been the language. I’m in the process of learning it now. I told the guys, ‘You need to be better at English, and I need to be better at Italian.’ I’m working to hold up my end of the deal.”

Castelfranco Veneto itself sits in a unique location. Just 45km from the charming canals of Venice and the shores of the Mediterranean Sea, it’s also only 90 minutes from the Alps, Europe’s largest mountain range. “I’ve been skiing a few times on the weekends,” notes Ewé. “It’s a really nice place.”

In addition to creating future opportunities for himself, Ewé has also paved the way for Danish nationals to coach professionally in the coming years. ” I love football and I want to develop football. That’s the main thing that I want to do. I have a responsibility of not being a jerk because I’m representing Denmark here or wherever I go. My dream is to go to the United States one day and coach there.”

Although Ewé has left Denmark, he certainly left his mark there. “Kim is more or less an institution in Danish Football,” explains Thomas Pederson, head coach of the Aarhus Tigers. “He is involved with the national team, the education of new coaches, and has been very helpful to other teams. His results speak for itself, and he has had success everywhere he has coached. He will be missed on the Danish sidelines, but I think it is very impressive that he gets a shot at coaching abroad. I wish him much success in Italy.”

With a quality coach in place, the Cavaliers are poised for success in 2015 and beyond.