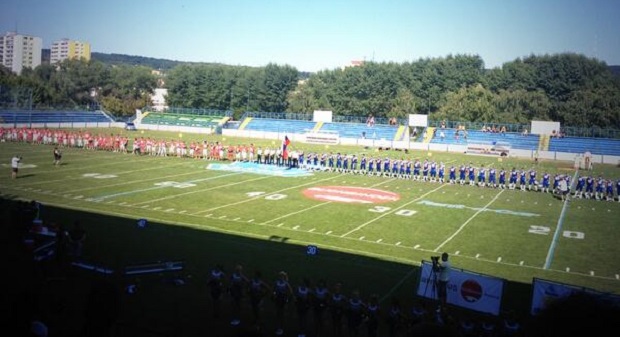 The Czech Republic vs. Slovakia on August 8th, 2013 at SKP Stadium in Bratislava

Last week I was in Giessen, Germany visiting a former teammate who now plays for the Gießen Golden Dragons, and we spoke about the growth of American football in Germany as well as the rest of Europe. We were both encouraged by the number of teams that have been popping up all around the continent as well as the motivation that inspired people to start a new team in their respective cities. We also discussed some of the issues that prohibit the growth of many of these teams, and there were many common themes that came up.

Some reasons are secondary or tertiary problems, such as accessing American football equipment or expressing the value of American football to sponsors, which is why we’ve created articles that have addressed both as a means to assist in these areas. However, some issues are of higher consequence, namely financial viability and access to quality facilities. It is these concerns that merit the most attention and require the most effort to overcome.

In many cities and towns, American football teams are fighting not only against competition in their respective leagues, but also against other sports teams within their own area. These teams are fighting for better access to practice or game fields just like we are – and they are well within their right to do so. The difference is that many of these teams have long-established followings or play a sport that has historically commanded attention in their country (i.e. soccer, rugby, track & field, field hockey, etc.). American football is still a fledgling sport in many countries and therefore needs more time to establish itself as a viable sport, business, and form of entertainment in these places. It may be difficult to believe, but the game of American football even took 125 years to become the most popular sport in the United States, the country of its origin. The good news is that the game’s long road to prominence in the U.S. has led to greater awareness of the game abroad and we now see many countries with very sophisticated American football leagues around the world.

Additionally, financial stability is a major hurdle with teams both new and old. Battling all the associated costs to maintain a team while still turning a profit can be a struggle. This is what our consulting firm addresses – generating new profit models for teams and organizations, identifying methods to reduce or eliminate superfluous costs, and assisting in budget planning to achieve future goals. Teams face many hurdles throughout their development and it’s important that they have a stable foundation before they move forward in anything they look to accomplish.

When it comes to each of these issues, there are several ways that teams can start on the right path to overcoming them.

A team’s first priority should be to increase the level of their game. It’s as simple as this: If you don’t offer a viable or interesting product, it’s just not going to be athletically talented. It needs to have an appealing and professional uniform and provide for an exciting gameday experience (announcer, comfortable seating, concessions, cheerleaders, etc.). The organization also needs to have a sense of direction and a bright future – something that fans and sponsors can identify with.

Everything starts from the top. Literally. The team president must design and share a vision with his management team. From there, they must put a coaching staff in place that understands and aligns with that vision. The coaching staff needs to develop an organized offensive, defensive, and special teams strategy, then find an efficient way to teach this and essential skills to its players. The staff also needs to set a high standard of consistency and commitment from its players, meaning that they are either 100% committed or they cannot participate on the team. It’s important to set this expectation early and often, and if it hasn’t been set already it should be set now. It’s better to have 30 fully committed players than 70 semi-committed players. If you’re too lenient you’ll deal with players not knowing the plays, being in poor physical condition, or worse – potential injuries. Don’t let this become an issue on your team.

Additionally, are you putting together the most talented team you can? Do you have the best coaches and players you can acquire within your current budget? Our Talent page can be a great resource for accessing the best import players and coaches. Have you done everything you can to access talent in the local community? Do you know how to connect with your target demographic in the region? These are questions you should constantly be asking yourself.

When you’ve put a quality product together – a good team, a solid organization, and a fun gameday experience it makes it a lot easier to address many of the aforementioned issues such as facility use and financial complications. If you have a good, disciplined team, you’re going to be in a better position to attract fans and sponsors, which makes it easier to approach various facilities or local governments to prove that you deserve local financial assistance, use of a better facility, and/or a more favorable practice or game schedule. You should be able to prove that your team has a loyal following, that you’re a serious organization, and that the local community wants to see American football.

So, are we doing enough to help American football grow? Are we addressing the internal issues previously discussed to create the best quality product we can? That is the way we’ll be able to help the game grow together, by offering the greatest value we possibly can to the largest number of people. If you need help, you know where to find us.