The San Francisco 49ers vs. the Jacksonville Jaguars at Wembley Stadium in 2013.

Translations of this article are also available in the following languages:EspañolItalianoPortuguês

When the National Football League announced that it was shutting down NFL Europe in 2007, the league was quick to state that they would be returning to Europe with an NFL regular season game in London later that year. They’ve since followed up on that promise, and then some. What started out as one game turned into the NFL International Series, which has since brought 11 games to London in 7 years and has no signs of slowing down anytime soon.

Prior to the creation of NFL Europe (originally known as the World League of American Football), the National Football League made a moderate foray into international markets by introducing the American Bowl series. The American Bowl was a succession of NFL preseason exhibition games that were played in various major cities such as London, Berlin, Barcelona, and Dublin. From the point when the series started in 1986 until it finished in 2005, the NFL had played 40 games across 12 cities on 4 different continents as part of the American Bowl.

The series, just like NFL Europe, was a moderate success. However each attempt was lacking a certain quality that was not fully appreciated at the time that each of these ventures was attempted. The missing characteristic was meaningful competition, as in games that are played at the highest level of ability and with the highest stakes possible. With NFL Europe, the National Football League was offering European fans quality football, but it was still the league’s second-tier players that had not solidified a spot on an NFL roster. Most players stayed for a season and moved on, resulting in minimal team loyalty by the league’s fans.

With the American Bowl series, the NFL offered its international fans games played by its top-tier teams, but it was not offering top-tier competition or even its top talent. Preseason games have no consequence on the course of the season or playoffs, and they mostly consist of players that will never take a snap in the NFL. Teams don’t play to win; they play to give their fringe players a chance to prove that they deserve to make the regular season roster. Even in the United States, preseason games are meaningless and of little interest to fans. In one famous case, the Baltimore Ravens cancelled a preseason game against the Philadelphia Eagles at Veterans Stadium in 2001 because the field turf wasn’t in poor condition. There was no makeup game ever played.

The NFL didn’t understand it at the time, but they were offering a second-tier product to the world and expecting everyone to bite. This is not to say that these weren’t positive learning experiences or that there weren’t some objectives met, however this sort of strategy simply wasn’t scaleable. Any sport makes its major breakthroughs with the general public by providing classic games and memorable moments. NFL Commissioner Roger Goodell was the first to understand this. Hence, the NFL International Series was born.

The series kicked off its first year in 2007 with a Week 8 matchup between the New York Giants and the Miami Dolphins in London. The Giants won 13-10 on a rain-soaked field at Wembley Stadium. Giants quarterback Eli Manning only completed 8 of 22 passes for 59 yards, but it was all the Giants needed on the day. Though the game was ugly due to the rain and it featured an unfortunate Miami Dolphins team who fell to 0-8 with the loss, it represented the first NFL regular season game played outside of North America. Perhaps most notably of all, and unbeknownst to the fans at Wembley that day, the Giants would go on to win the Super Bowl that year over the New England Patriots 17-14 in thriller. Not a bad way to start off the London series. 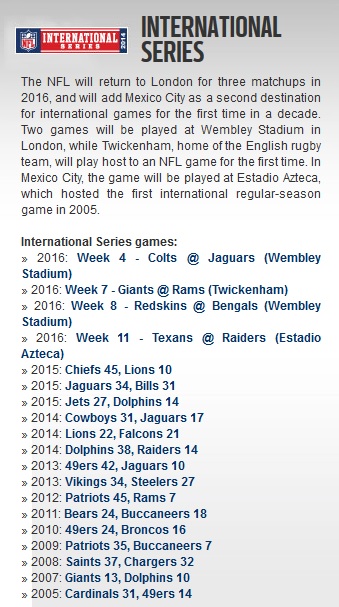 The league followed up with another game in London during the 2008 season which featured the New Orleans Saints defeating the San Diego Chargers 37-32, the year before the Saints would win Super Bowl XLIV over the Indianapolis Colts, 31-17. The next four seasons represented a continuation of the one game per year format until the series expanded to two games in 2013. That year the crowd was treated to a San Francisco 49ers team that was fresh off a 34-31 loss in Super Bowl XLVII to the Baltimore Ravens. The 49ers would again make a deep run in the playoffs that year, losing a close game to the eventual Super Bowl champion Seattle Seahawks in the NFC Championship game, 23-17. After great success with two games at Wembley, the NFL quickly expanded to three games in 2014.

The league has a fresh slate of three games scheduled for 2015, and as American Football International reported, the NFL may have added a fourth game had it not been for the 2015 Rugby World Cup which is hosted by England and will be utilizing Wembley Stadium for multiple games. NFL Vice President of International Mark Waller recently stated that he’d “be very disappointed if we’re not playing more than three games there in 2016.” It looks as though the NFL International Series is only destined to grow.

The games allow the NFL to test various logistics such as travel, bye week logistics, tax factors, and so on. Next season will represent a couple firsts for the series, with the first back-to-back weeks (Bills-Jaguars in Week 7 & Lions-Chiefs in Week 8) that will test the durability of the field, as well as the first in-division game as AFC East foes square off when the Miami Dolphins face the New York Jets in Week 4.

The NFL has considered opportunities to play elsewhere in Europe, namely in Edinburgh (Scotland), Cardiff (Wales), Dublin (Ireland), and Berlin (Germany), however they’ve found London’s accessibility, facilities, and fan support to be a distinct advantage. Rather than trying to focus on too many markets at once and spreading themselves thin, they’re trying to penetrate one market and create a lasting presence there.

So far, the NFL International Series in London has sold out every game it’s played, with the exception of the 2011 season in which tickets went on sale late due to an ongoing NFL Lockout. With the series showing no signs of slowing down, it seems like the sky is the limit for American football in London.