Translations of this article are also available in the following languages:ItalianoPortuguês

By the time I arrived in Europe to play my first season for the Brussels Bulls in 2008, NFL Europe had been closed only a few months. The National Football League, under the guidance of newly elected commissioner Roger Goodell, officially disbanded its NFL Europe league on June 29th, 2007. In doing so, hundreds of thousands (if not, millions) of fans across Europe and the United States were left displaced and disillusioned, resulting in a nostalgia for the days when NFL Europe was in its heyday.

Yet there are two sides to this story, and though it certainly may not have appeared to be the case at first, the NFL is just as committed as ever to building a fan base in Europe. Let’s start with a brief history of the league for some perspective.

NFL Europe was originally founded as the World League of American Football in 1989 as a spring developmental league for the NFL and played its first season in 1991. The league was established with teams in both Europe and the United States, and from its outset dealt with major problems, in particular a lack of public interest which resulted in low attendance. The league shut down following just its second season in 1992, but returned in 1995 with 6 teams as an entirely European league. The league then continued uninterrupted until 2007, stopping only to change its name to NFL Europe in 1998. The league again changed its name to NFL Europa in 2006 to reflect local languages, before ultimately folding after the following season in 2007.

European teams such as the London Monarchs, Barcelona Dragons, and Frankfurt Galaxy were among the founding members of the league, and in 1995 they were joined by the Amsterdam Admirals, Rhein Fire, (Düsseldorf) and Scottish Claymores (Edinburgh). However, after only a few years of existence it became clear that teams outside of Germany were struggling to build, or even maintain, fan support. Teams in London, Edinburgh, and Barcelona eventually ceased operations and were replaced by three German teams: the Berlin Thunder, Cologne Centurions, and Hamburg Sea Devils. The Amsterdam Admirals remained the only NFL Europe team outside of Germany. 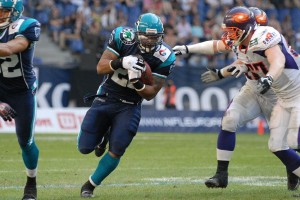 While average fan attendance began to grow due to the consolidation of its teams in cities with greater support, it was not enough to convince the NFL to continue its operations. The National Football League and its owners decided it wasn’t worth the investment in a developmental league and chose to cease operations. The league closed down following the 2007 season and there has been no serious attempt at a replacement league since.

It’s easy to criticize the move, as American football fans throughout Europe were – and still are – disappointed that the league wasn’t given more time to develop. However, some interesting things began to take place in the years since NFL Europe folded.

For starters, the NFL followed through on its commitment to promote the league in Europe, establishing the NFL International Series immediately following the cessation of NFL Europe operations. The league started with its first regular season game in Europe in 2007, a match that saw the New York Giants (eventual Super Bowl champions later that year) and Miami Dolphins square off at Wembley Stadium, with the Giants winning a close game, 13-10. The NFL continued playing one game per season at Wembley, until the 2013 season when they raised that number to two per season. This year, Wembley is hosting 3 regular season games for the first time in its history. This whole process cleared way for American football fans in Europe to focus their attention on the game’s most-superior league, the NFL.

Football in Europe has also grown immensely in the years following the demise of NFL Europe. Much of that has to do with the increase in interest at the national level within most European countries, as well as the availability to access NFL broadcasts on local stations or over the internet. The sudden leap forward in technology and connectivity has only enhanced the National Football League’s status abroad, and there is nowhere in the world where the game is growing faster than in Europe. European players also began to slowly develop a presence in the NFL, notably Sebastian Vollmer (Germany), Sebastian Janikowski (Poland), Michael Roos (Estonia), Margus Hunt (Estonia), Osi Umenyiora (England), Zoltan Mesko (Romania), and Lawrence Tynes (Scotland). This led to increased publicity in their respective countries and further awareness of the game of American football.

During the existence of NFL Europe (1991-1992, 1995-2007), European fans had minimal exposure to NFL games. Instead, they were privy to NFL Europe teams who had no consistency with team rosters, who weren’t investing steadily in local marketing, and claimed minimal public interest. Most players were on the roster for one year before moving on to the NFL, CFL, or arena leagues in North America. Fans grew to be disenchanted because their favorite players were guaranteed to leave after the end of the season. Although fans were watching a high-level of football, they were watching second-tier players from the United States instead of first-tier players from their own country. Plus, several teams closed down and the league’s future was perceived to be uncertain at best. There was a bit of a disconnect in these respects, which resulted in a lack of loyalty among fans, causing growth to remain stagnant for the league’s entire existence.

Nowadays, European fans get the best exposure possible to American football. National leagues are growing rapidly, with new teams popping up every week. Countries such as the United Kingdom, Germany, France, and Italy have hundreds of teams at all levels from youth through adult leagues. Many countries also have flag teams and women’s teams, indicating the wide appeal of the game. Fans also have the option of watching NFL games on local TV stations, streaming live NFL games online through NFL Game Pass, or making the trek to London to see a game in-person in London.

It’s not necessarily the act of closing down NFL Europe that led to many of these developments, but rather it allowed the world’s greatest league to refocus its efforts on expanding the profile of the NFL itself. By making the top level of American football available to anyone with an internet connection, it has helped the game grow exponentially throughout Europe. Eventually, we may even see an NFL team in London, something that has become a real possibility over the last few years. Either way, we’ll continue to benefit from the growth of American football throughout Europe.