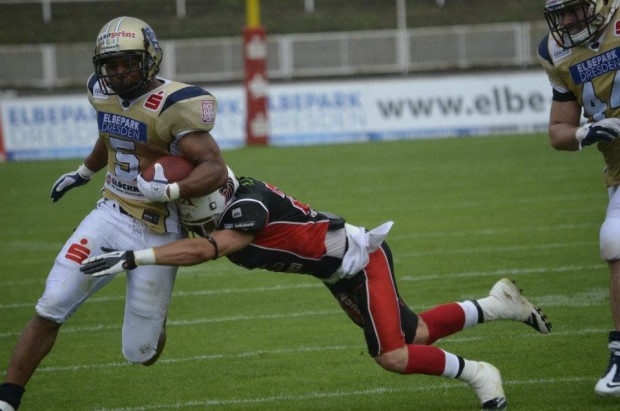 Larry Croom playing for the Dresden Monarchs in Germany.

You don’t find many guys who have played in Division 1 college football, the NFL, NFL Europe, and the German Football League. Larry Croom did just that.

That he came from a city like Long Beach, California – home to legendary hip hop artists such as Snoop Dogg, Warren G, and Nate Dogg – to eventually play in places like Amsterdam, Hamburg, Dresden, and Berlin only makes this story even more improbable.

When I was a teenager attending Los Alamitos High School, one of our biggest rivals was a school by the name of Long Beach Polytechnic (Poly for short), a school just across the Los Angeles County line but only about 5 miles away. Long Beach Poly is renown for having the most NFL players to have attended its school – over 60 players and counting. That list includes big names like DeSean Jackson, Willie McGinest, Mark Carrier, and Gene Washington, among others. During my freshman year at Los Alamitos, we heard a lot of rumors about Poly having this great running back who was attracting lots of attention. That player was Larry Croom.

Croom excelled during his time at Long Beach Poly, winning a CIF title and rushing for over 2,600 yards and 61 touchdowns in his two years as a starter, despite missing 7 games to injury and splitting time with future University of Oregon standout Herman Ho-Ching. He accepted a scholarship to the University of Arizona and played as a true freshman, eventually starting several games his sophomore year. After a head coaching change, Croom transferred from Arizona to the University of Nevada Las Vegas (UNLV) to play under the great John Robinson. Robinson was formerly the head coach of USC and the Los Angeles Rams, eventually settling into a position as the head coach at UNLV near the end of his career. “Robinson was a great coach – I’d run through a brick wall for the guy,” said Croom. “I had grown up around USC when I was a kid and Robinson was the head coach there at the time, so I knew what he was all about.” Croom elaborated on what set Robinson apart from other coaches. “He let his players be themselves. He made it a fun, light atmosphere. As a person I had a lot of respect for him. He’s probably the only coach I’ve heard of where even the guys that sat on the bench never had a bad thing to say about him because he was always a straight shooter. He would tell you straight up why you weren’t getting on the field. He was the last of a dying breed. These days a coach has to be a psychologist and a personal counselor. They might stretch the truth, anything to keep a kid motivated. That was never the case with him.” 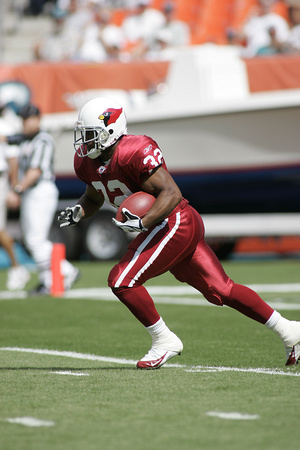 Croom with the Arizona Cardinals in 2004.

During his two years at UNLV, Croom rushed 292 times for 1,537 yards and 10 touchdowns. Despite an injury during his senior season, he was signed as an undrafted free agent by the Arizona Cardinals in 2004. Croom started 2 games his rookie season for the Cardinals and was allocated to NFL Europe’s Hamburg Sea Devils in the spring of 2005.

Hamburg was the beginning of Larry Croom’s 6-year European career. While it was a life-changing experience for him, it didn’t start out as a match made in heaven. “NFL Europe was great, but I didn’t appreciate it much my first year because I compared it too much to the NFL,” he explained. “I had started a few games for the Cardinals the year before and didn’t feel like I should be going over there. That season in Hamburg also happened to be the first year of the Sea Devils organization, so they had to do everything on the run.” In spite of the challenge, Croom excelled in his first season in Europe, rushing for over 500 yards and 4 touchdowns in a 10-game season. In the fall, he started out with the Tennessee Titans until the last series of cuts, then went to play for Steve Mariucci’s Detroit Lions. He dealt with injuries that season while spending the majority of the year on the Lions’ practice squad, and after the season ended he signed a free agent contract with the San Diego Chargers. By the time spring came around he was reallocated to NFL Europe again, this time with the Amsterdam Admirals.

“This time around, I had a much different mentality. I had been hurt and missed most of the season with the Lions, so this time I needed NFL Europe. I really opened myself up to a wonderful time, to great people, to other players from different walks of life, and great coaches. I really embraced the challenge and the whole experience really humbled me.”

Croom loved his time in the Dutch capital. “In Amsterdam, people were very warm and inviting. Everything there made you feel like you were on an NFL team.” He really soaked in the experience and it translated to the field. The 2006 season was his best season in NFL Europe, as he rushed for over 400 yards and led the league in touchdowns with 8. It was an important period of professional growth for him, as he really took to the Admirals’ helped me feel confident in my abilities. He really trusted me as a player, and it helped the game slow down a lot for me.”

That season, the Admirals finished 7-3 and advanced to the World Bowl, NFL Europe’s championship game. Croom rushed for the Admirals’ only touchdown in the game, a 12-yard run midway through the second quarter. The Admirals eventually lost 22-7 to the Frankfurt Galaxy, but the season was a great success and Croom hoped for the opportunity to play in NFL Europe again.

After the Admirals season, Croom injured his shoulder in the Chargers’ training camp and spent the year on the Injured Reserve list. The Chargers’ released him at the end of the 2006 campaign, so he was a free agent when the Admirals invited him back again for the 2007 season.

In Amsterdam, Croom had another solid season, rushing for over 600 yards and added over 500 yards receiving. He finished his NFL Europe career as #2 on the Admirals’ all-time rushing list. After the season ended, the NFL decided to shut down its NFL Europe operations and Croom signed on with the Pittsburgh Steelers in his final year in the NFL. He spent the season on the Steelers’ practice squad, and much of that time he was recovering from an abdominal injury that resurfaced from his rookie season with the Cardinals.

After a few years away from the game of football, Croom decided he would give Europe another shot. With NFL Europe now disbanded, many of the former players were competing in the German Football League (GFL), one of Europe’s premier national leagues. Croom’s friend and former Admirals’ teammate Michael Andrew suggested he give the GFL a shot, and in early 2011 he signed with the Dresden Monarchs, one of the strongest teams in Europe. “It gave me a chance to play again,” said Croom. “I had a completely different mentality coming back this time – I was thankful just to put on a helmet. I tried to make the most of it. I felt like I had more to give to the game of football and I still loved to play. I thought I could play at a high level and I was looking forward to proving that.” 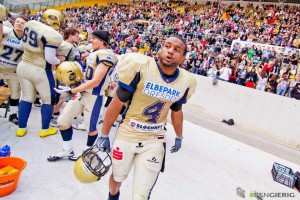 Croom with the Dresden Monarchs in 2012.

He certainly proved he had a lot left in the tank. His first year in Dresden, he rushed for over 1,400 yards and 16 touchdowns. After a successful campaign, the Monarchs re-signed him for 2012 and he made their decision look like a brilliant one. He won the team MVP award, led the league in rushing, and rushed for over 2,200 yards and 23 touchdowns, helping to carry his team all the way to the GFL Semi-Finals.

“I loved NFL Europe, but you didn’t get the full experience,” he noted. “With NFL Europe, most of the players were American so we didn’t have much interaction with the local community. Players stayed in hotels during the season and didn’t travel much. In the GFL, most of the players are German or from other parts of Europe, so you learn more about how they lead their lives. The team in Dresden was really family-oriented, and many of the players on the team had grown up together. As one of the older players with more experience, I really was able to be like a big brother to several of the guys. It was really a family atmosphere.”

While he was back in the GFL, Croom had the opportunity to travel to some great cities, including Prague, Nuremberg, Amsterdam, and London. In Prague, he was hired to film an XBOX commercial and got to experience what it’s like to be on a professional set. It was just one more unique experience that helped him appreciate his time there. 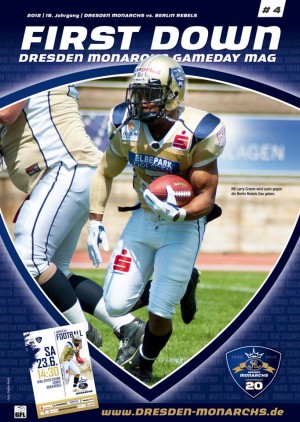 Croom on the Monarchs’ gameday program.

He spent his final year in football with the Berlin Adler in 2013, dealing with another injury but still managing to rush for 1,100 yards and 12 touchdowns while playing in only half the team’s games. After that season, Croom decided to hang it up, but he still cherishes the experience of playing in Europe.

“Playing with the Admirals and the Monarchs was the most fun I had playing football. I’m still friends with those guys – friends for life, really. We really learned a lot from each other and leaned on one another at times.”

Today Croom splits his time coaching football at a juvenile facility in Las Vegas where he originally worked as a substitute teacher during the GFL offseasons, participates as a guest speaker at local schools, and works with a non-profit organization that assists with group homes. “I was very fortunate as a kid early on in my life and I think it’s important to give back to the local community. It’s always been essential to me to do things for someone other than yourself.”

Looking back on his time in NFL Europe and the German league, Croom has some great perspective. “I definitely think Europe is a special place. I actually lived there for 6 years of my life, so it played a big part in the person I am today. It’s an experience that everyone should live. If you truly love to play the game of American football and you’re able to do so financially, it’s a great experience to have. I’m honored to say I have friends in another country. I can go to Berlin and I have people to catch up with. I have experiences and memories I can share with my brother and my future kids.”

When asked about the future of American football in Europe, Croom had a very strong opinion about it. “It’s a place where football will really take off in the next 10-15 years.”