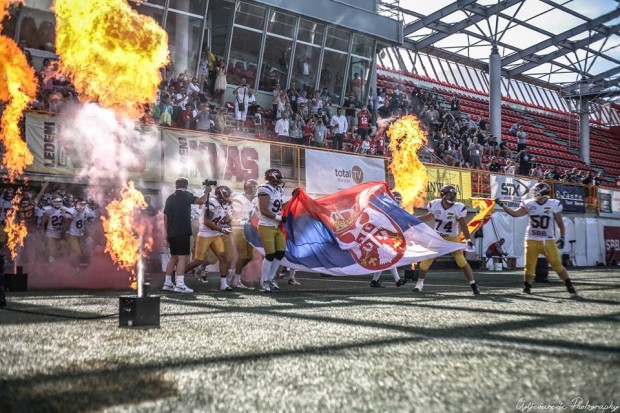 Translations of this article are also available in the following languages:Srpski

The development of American football has uniquely progressed in the 41 European countries that currently have teams. The game organically appeared in each of these countries and the story of the sport in any one place is never quite the same as in any other. Even within this context, the development of the game in Serbia has been truly unique.

For starters, Serbia is the only country in Europe which saw an 8-team full contact tackle league with players who wore no pads. Sasa Stojanovic, president of the Čačak Angel Warriors, described how in the early years of American football in Serbia, these teams would only wear mouth guards but would play just as hard as if they had helmets and shoulder pads. “Serbs are explosive people who are athletically gifted. All the wars have ended so it is only natural that we would embrace such a physical sport so deeply even though we couldn’t afford pads at first.”

Referring to this time as “the early years” is somewhat misleading however, as this took place in 2005 and 2006. Moreover, the first American football team in Serbia, the Sirmium Legionaries, was only founded in 2002. It was only in 2009 that there were enough teams with pads to compete amongst themselves in a fully developed league.

Now, just 7 years later, the sheer number of teams is impressive to say the least. In fact, American football in Serbia is experiencing one of the fastest and most prolific growth periods of any country in Europe.

There are currently 3 divisions in Serbia, which, from top to bottom, are the Priva Liga, the Druga Liga, and Treca Liga.

Other teams that do not currently fit within these three leagues include the Lazarevac Sabers, Mladenovac Forestlanders, Novi Kneževac Grofovi, Pirot Vitezovi, Valjevo Werewolves, Vranje Vrane, and the Vrbas Hunters. 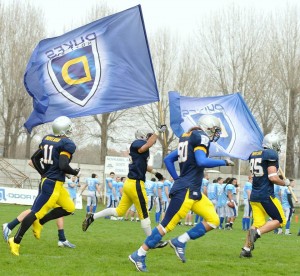 In addition to competing in the Serbian divisions, the following teams also compete in the CEFL East alongside Hungary’s Budapest Cowbells:  the Beograd Vukovi, the Inđija Indians, the Niš Imperatori, and the Novi Sad Dukes. This year, in the CEFL Championship game, the Beograd Vukovi nearly defeated the Graz Giants. This is a true testament to how far American football has come in Serbia since Graz is one of the best teams in Austria—the country with the most advanced play in Europe alongside Germany.

The two teams with the most renowned international reputations are the Beograd Vukovi and the Novi Sad Dukes. These two teams have not only been consistently dominant within the Serbian league and the CEFL, but collectively, they are responsible for every Serbian Championship between 2011 and 2015.  The Vukovi won in 2011-2014 and the Dukes won in 2015.

However, despite their international renown, these two teams are hardly the only great teams in Serbia.  The Kragujevac Wild Boars won the Serbian championship in 2010 and reasserted themselves as one of the best teams in Serbia by beating the Vukovi in the championship game in 2016.

While we should all celebrate the fact that so many Serbian athletes are flocking to the game and that teams are rapidly sprouting up across the whole country, the nature of this growth should perhaps give us pause. Are more teams really the best thing for the overall development of American football in Serbia, or anywhere else?

Nemanja Kokar, sports director for the Sirium Legionaires, described some of the issues with having so many teams in a relatively small country. “It dilutes the talent, resources and coaches. American football is still young and the quality players are spread very thin.”

When asked what his ideal scenario for the structure of American football in Serbia would be, Mr. Kokar went into specifics. “There should be 2 divisions with less overall teams. This would allow for the best players to concentrate on the same teams, the best coaches to coach these players, and the lower level teams would have incredible examples from which to learn.”

Still, Mr. Kokar was extremely positive about the state of the game in Serbia. His concerns should be taken to heart though, since Serbia is hardly the only country in Europe where American football struggles with the issue of talent dilution.

Setting aside any strategic or philosophical discussion as to how American football should ideally develop in Serbia, the game is booming and this is great news for anyone who is passionate about the advancement of American football in Europe.

Interestingly, this rapid rate of growth stands ahead of Serbia’s neighbors. Three surrounding countries – Montenegro, Albania, and Macedonia – have no teams at all, and another – Bosnia – has only one team. In Croatia, Romania, and Bulgaria, there are relatively well-established traditions of American football, however, in these countries the game is struggling to gain traction and truly take off like it has in Serbia. The state of the game in these countries has grown modestly over the past 8-10 years.

Of all of Serbia’s neighbors, only in Hungary is American football well-established, with almost 30 teams and as many years of competition. However, despite such a strong presence in Hungary, the game did not truly explode the way that it has in Serbia.

Why then does Serbia stand out so strikingly among its neighbors? Ivan Kosanovic, president of the Pančevo Panthers had an intriguing explanation for this. “American football is really a unique sport because it requires more than 50 players for one game. There is no sport like this here in Serbia. The tactics, the strength, the speed – there is nothing like American football, and that’s why Serbians like it so much. It’s the ultimate competition. I don’t know if there is anything more to it than this. Sport is sport, Serbians love sports, and there is no sport like American football.”

Nikola Davidovic, president of the Beograd Blue Dragons, echoed this sentiment. “Serbians love sports, and there is no sport like American football. The pioneers of American football in Serbia are just regular guys who the love sport and that’s it.”

In alignment with their passion for American football, both Mr. Kosanovic and Mr. Davidovic recently joined The Growth of a Game team. They work in partnership to provide Serbian translations to a wider audience and to get new information and resources into the country that is enthusiastic for more ways to grow the sport. Their translations can be found here.

Another reason why the game has developed so quickly in Serbia is because import coaches and players are almost universally embraced across the country. “The biggest improvements were made by coaches and players from the United States,” explained Mr. Kosanovic. “There are a lot of guys in Serbia who use the internet to learn techniques and how to organize drills. It’s so important to have great coaches to teach us based on a lifetime of experience with the game.”

This of course does not take away from the talent, drive, and dedication coming from players, coaches, and administrators within Serbia. However, it is important to note that every team in the Priva Liga and most teams in the Druga Liga have multiple import players as well as import coaches. The coaches may not be head coaches, but there is not a single Serbian team in the top division which does not have an import coach somewhere on its staff.

Coach Sean Embree epitomizes the success that follows the right kind of leadership and devotion. Coach Embree has been the head coach for Beograd Vukovi on and off since 2011. He led them to 3 straight Serbian Championships wins and another appearance in the Serbian Bowl in 2016. In Serbia, where American football is absolutely exploding, Coach Embree has overseen the development of the most successful club in the country. 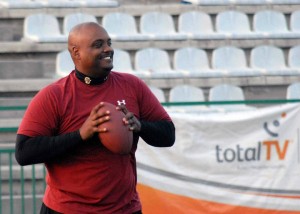 Coach Embree’s impact on American football in Serbia should be taken very seriously by anyone who opposes import coaches or players. Under the right circumstances, imports elevate not just the level of all players in the club, but they also elevate the coaching of their fellow coaches and contribute to enhancing the entire performance of the club as a whole, from general organization to raising sponsorship. Serbia is a living testament to the benefits that come from the proper introduction of import coaches and players.

The Growth of a Game also interviewed Goran Nisavic, previously the general manager of the Beograd Vukovi and a current Chairman of IFAF. When asked about the challenges he faces with his new role, Mr. Nisavic had a very poignant response. “Europe is so diverse. We all have the same goal, but we have different paths to it.” Mr. Nisavic was referring to the adversity involved in organizing a coherent path for the development of American football across all the different cultural and historical boundaries of Europe. The Growth of a Game has sought to harness this passion for the sport and unite people behind a common goal.

While it is true that creating uniformity across all European countries is extremely challenging, Mr. Nisavic’s words are both accurate and optimistic. Each country is working towards growing the game in its own way. Each country has its own individualize approach, but this is a good thing, despite the challenges that such diversity can create. How else can the game we love so much continue to develop in such a way so as to thrive in every country in Europe, including a country as uniquely situated as Serbia?

The state of growth in Serbia is living proof that American football can thrive despite economic, geographic, or political challenges. The success that the Serbians have had should inspire us all.

I would like to give a special thanks to the following gentlemen who made this article possible and who serve as a true inspiration to any passionate advocate of American football in Europe: