The location of Tromsø, Norway on the European continent.

For much of its 29-year existence, the Oulu Northern Lights from Finland were able to boast that they were the northernmost American football team in Europe. That all changed in a big way in 2011.

American football has been played in Norway since the 1980’s, but for years it was almost exclusively centered around Oslo, the country’s capital. As the game expanded, teams sprang up in other cities such as Bergen, Stavanger, and Trondheim, with the latter representing Norway’s northernmost expansion from 1990-2011. Nonetheless, for a country that stretches over 2,500 km from north to south, Trondheim was still very much situated in southern Norway. The northern half of the country went years without being represented by an American football team.

That’s where Trailblazers’ head coach Sveinung Løfaldli comes in. “I moved to Tromsø in 2011 to attend university,” recounts Løfaldli. “Before I moved up here, I quickly figured out that they didn’t have a football team. So I said, ‘well, we have to fix that.'”

Although he was only 20 years old at the time, Løfaldli was no stranger to American football. A native of Trondheim, he attended an American high school in the state of Nevada at the age of 17, playing a full season on the school’s football team. “I was mainly a placekicker since I lacked experience – that was the primary way I could contribute to the team,” notes Løfaldli. “I had a very quick introduction to the game when I was forced to make a touchdown-saving tackle on my very first kickoff. No one had ever taught me how to make a tackle, so it wasn’t pretty. But it was effective.”

After training briefly with the Nidaros Domers upon his return to Trondheim the following year, Løfaldli joined the Norwegian military and served there for two years. Fresh off of active duty, he moved to Tromsø to begin his studies and quickly sought a way bring American football along with him. 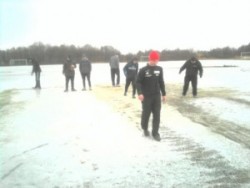 The Tromsø Trailblazers during one of their early practices.

“We held our first practice in October 2011, and there were 3 people who showed up including me. At our next practice, we had 5. Then 6-7 at our following practice, and then 9-10. By 2013 we had managed to build enough interest and increase the number of players to the point where we could realistically call ourselves a team. We applied for membership to the national association and we were accepted in the summer of 2013.”

Tromsø is the north’s largest city and the capital of northern Norway. It is also home to the University of Tromsø, a top 4 institution in Norway and the biggest university in the north. With a student population of around 13,000 and an overall population of around 72,000, Tromsø’s students have a very large impact on the city and the way it functions. One of the things they have a strong impact on is the Trailblazers, with whom they make up the vast majority of the roster. 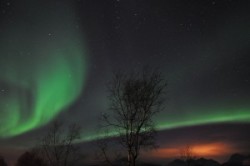 For some perspective on just how far north Tromsø is, it’s further north than the northernmost point in Sweden (which, by the way, is known to be a particularly cold country). It’s further north than the majority of Siberia and Canada, and the sun never fully sets from late April until mid-August. Conversely, the sun never rises from late November until late January, which happens to be the best time to view the Aurora Borealis. Tromsø lies 1,150 km from Oslo and it takes 23 hours to drive the full distance to the capital by car. Lastly, it takes the same amount of time to fly from Oslo to Prague as it does to fly from Oslo to Tromsø.

Løfaldli found a bit of a kindred spirit in Eyvin Sommerseth, another Norwegian who developed an interest in American football during an exchange year in Texas. “I’ve been involved with the team ever since the very first practice back in 2011 and I’ve stayed with the team ever since,” notes Sommerseth. “My main responsibility with the team is overseeing contact with the national federation.” Sommerseth also plays on the squad as the team’s center, and he’s been an integral part of team’s development and stability.

“When we first got started, we were practicing on gravel once a week without equipment,” Løfaldli recalls. “We played semi-contact football and focused on getting into position to make the tackle, but we couldn’t use true technique without pads. That changed in late 2013 – we received our equipment and started playing at an indoor facility with artificial turn, which was a huge upgrade for us. But if you were on the outside looking in when we started out, there was probably no indication that it would work out.”

The Trailblazers at their new practice facility.

“Our team is mostly made up of people with little to no previous experience,” Sommerseth explains. “Since Tromsø is a fast-growing university town, we do get the occasional guy moving up here for college or work with previous experience from other teams in Norway, which has helped us out quite a bit. We’ve also got a few athletically gifted players on our team who we’re aiming to mold into good football players. As far as desire goes, I’d say we’ve got a bunch of guys with high hopes. The mood in the team is great these days and the guys are really looking forward to getting out on the field.”

At first glance it may also appear that the Trailblazers’ biggest issues are with the climate, but that comes secondary to geography. Because of the vast distances between the Tromsø Trailblazers and the next closest teams, travel becomes a massive consideration. With 787 km separating them from the Nidaros Domers – the closest team to them in Norway – flying is the only reasonable option to play away games. Even their closest neighbors in Finland – the Rovaniemi Nordmen – and Sweden – the Luleå Eskimos – are 448 km and 476 km away, respectively. For a new team, this geographical disadvantage could run their expenses through the roof and put them out of operation before they even get rolling. Fortunately, the Trailblazers were not the only ones to see the value in what they were doing.

The Norwegian national federation, recognizing that the Trailblazers were the league’s best chance to promote the growth of American football in northern Norway, wisely instituted a policy that requires all teams in the 2nd division (and the federation itself) to pay into a fund that goes to cover a majority of travel expenses for the Trailblazers. Each team (including the Trailblazers) pays approximately 19,000 Norwegian krone (~2,250€), while the federation itself pays more than all of the teams combined. This impressive display of foresight by the Norwegian federation is likely to have a lasting effect not only on American football in northern Norway, but on the entire Scandinavia region as a whole.

“As for our future, in the short term we’re getting ready for our inaugural season of Division 2 football,” Sommerseth continues. “We want to create a youth team so that we can have a reliable source of new Trailblazers for years to come. But beyond the next few years, we’re hoping to be able to play against opposition a little closer to home in the future, and our long-term goal is to take part in setting up a region or division for arctic teams where we wouldn’t have to travel by airplane all the time. We want to be a part of the steady excellent football players. We’re also open-minded and willing to try out new things, which should help the sport grow.”

Why did the team decide on the Trailblazers as their mascot? “We see ourselves as pioneers by bringing the sport up here,” Løfaldli attests. “We’re blazing a trail that we hope others will follow.”

As an outpost deep in the northern reaches of Norway, the Tromsø Trailblazers are proving that the growth of American football has no limits.