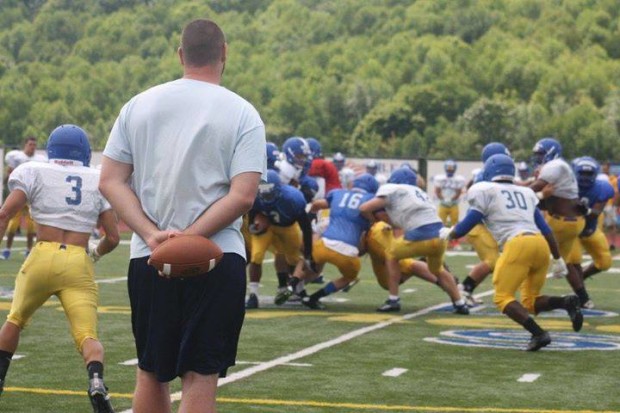 Taking it upon himself to increase his coaching knowledge and understanding of the game of American football, Eoin O’Sullivan recently shadowed the coaching staff of the Alfred State football program in New York. O’Sullivan, an assistant coach for the Irish national U-20’s team, opted to learn from some of premier coaches at the NCAA Division 3 level in the United States.

Following an 8-day stint with head coach Jarod Dodson and the rest of ASC’s coaching staff, we interviewed O’Sullivan to get his thoughts on the experience:

How was your experience shadowing a college program in the U.S.?

It was a fantastic experience! I’m extremely thankful to Coach Dodson and his staff over at Alfred State for the opportunity.

How did this opportunity come about?

I have a long-standing relationship with Coach Daniel Levy, who is currently the Offensive Coordinator at ASC. Our friendship dates back 10 years to our days playing together in Ireland for the UL Vikings, and most recently he brought me onto his coaching staff with the Vila Velha Tritoes in Brazil in 2014. Coach Levy provided me the opportunity to shadow the ASC coaching staff.

What was your impression of the coaching staff at Alfred State College?

The coaches were incredibly knowledgeable in all football matters, both from a tactical and organizational standpoint. They went out of their way to make me feel welcome during my stay and were always quick to include me in their discussions, to ask for my input, and to share their wealth of collective wisdom with me.

What were some of the highlights of your experience?

Spending so much time on the field and in meeting rooms with the players and coaches, as well as the chance to observe more experienced coaches breaking down film; seeing how they operate in their offices, preparing for each day meticulously; the exposure to each coach’s respective football ideologies and what they expect from their players; and of course seeing first hand the level of on-field talent that exists at the NCAA level.

Did you focus on a particular position or positions?

I tried to make the most of the training camp visit by spreading myself around as much as possible, but as a former offensive lineman I could not help but spend a significant portion of my time shadowing Coach Tony Spencer as he worked his magic with his ASC’s big boys. Coach Spencer has over 20 years of experience and came over to Alfred State from the University of Missouri – a Division 1 SEC program – so it was truly an honor to watch him work.

From an X’s and O’s and philosophical standpoint, was shadowing at Alfred State particularly helpful? If so, why?

Yes it was very helpful from an X’s and O’s standpoint. I would consider myself a disciple of Coach Levy’s spread power system – similar to what Gus Malzahn runs over at Auburn but with few of Dan’s twists and wrinkles. NCAA-level spread systems are not widely utilized in Europe, so being able to take away as much tactical information as possible was of huge benefit and a rare gift for my career. I am a firm believer in the use of RPO’s (Run Pass Options) and it was to my good fortune that Alfred State’s offense features a number of these, as well as numerous formations I had not already considered for my own playbook. 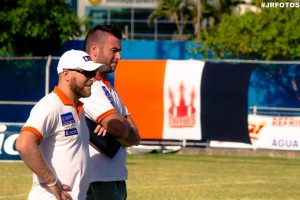 Daniel Levy (left) and Eoin O’Sullivan (right) coaching together with the Vila Velha Tritoes of Brazil in 2014.

Do you think you will be able to take these philosophies and effectively teach them to the Irish national team?

I definitely plan to share the lessons learned from my time with Alfred State with the rest of the coaching staff of the Irish National Team. I feel that it could be of great benefit to our competitiveness on an international stage.

What about another team in Europe?

Yes, absolutely. I am currently in talks with a number of teams about joining their programs, be it as offensive coordinator or head coach. The new skills I have acquired from my recent trip to Alfred State, and the lessons I have learned from their staff can only strengthen my abilities to perform at the highest level in Europe.

Which area were you able to advance the most? The football side? Organizationally? Operations?

I would say the things I learned the most were from an organizational and operations point of view. The X’s and O’s were of course very beneficial to me and I learned a lot of those, but being able to observe coaches who have worked at the D1 and D2 levels plan each of their days and structure every practice in such a detailed manner was instrumental in advancing my understanding of running a football team.

Do you think more European coaches could benefit from such an experience?

I cannot recommend highly enough the experience of shadowing an NCAA program as I did. In one week I was able to massively increase my experience and confidence in running a team. Any coach would be lucky to spend time shadowing such highly talented individuals as the ones I met at Alfred State.

What is your goal coming out of this?

As mentioned before, I’m in talks with other programs at the moment to join their coaching staffs. I feel very confident in taking on any new challenges, and am excited about the future of my football career.