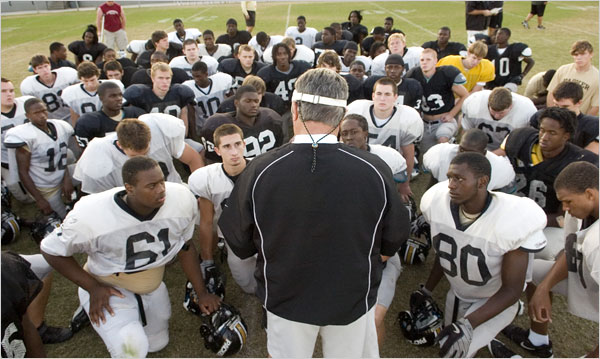 Translations of this article are also available in the following languages:FrançaisItaliano

Coaching is, most importantly, putting your players in the best position for them to succeed. The most obvious ways to do this are to train your players well in practice and to call plays that take advantage of your opponents’ weaknesses. However, it also means putting the right players on the field in the right positions and letting them make the most of their abilities.

Forcing players into positions that don’t maximize their skills or overlooking players who are talented but don’t fit your system can be a dangerous precedent to set. You don’t want to become rigid and stick to an antiquated system because you’re unwilling to learn something new. You need to take the time to objectively evaluate your players and install a system that utilizes your strengths more than any other. It is the coach’s responsibility to put the best 11 players on the field, and sacrificing talent for stubbornness is a surefire way to be fired.

At the start of my 2nd season in Europe, we were playing in a “spread” formation on offense (1 back, 1 tight end, and 3 receivers). After we lost our first two games by close margins, I made a minor suggestion that paid major dividends. Since we had 4 quality receivers and an inexperienced tight end, I recommended that we convert to a “4-wide” set (1 back, 4 receivers, no tight ends) that allowed us to get our best players on the field. Though there was some hesitation because of the potential lack of pass protection, we made the switch and the benefits were immediate. We won the next three games decisively and put ourselves in a position for a playoff run. Having our best 11 players on the field far outweighed the value of having extra pass protection, instead putting additional pressure on our opponents’ defensive secondaries and forcing them to move another defensive player outside of the box. Not only did our level of offensive output increase, we actually improved our pass protection by limiting the number of pass rushers.

If you don’t have two good running backs, then why use a 2-back system? If your strength is on the left side of your offensive line, why not run to that side more often? Don’t help your opponent with poor play-calling and unfavorable formations – learn to put your players in the right positions and call plays that maximize their abilities. If you don’t realize that these types of small adjustments can make the difference between winning and losing, you’re kidding yourself.

There are also lessons to be learned from other sports as well. While coaching a basketball team one season I observed that we had one player that played at a higher energy level than anyone else on the team. When he was on the court, the team played with greater tempo and put significant defensive pressure on the opposition. Due to his high energy and stellar defensive play, he was one of our 3 or 4 best overall players. Most coaches would assume that he should be a starter to maximize his immediate effectiveness, but I discovered a better way to use his skill set. Rather than putting him in the starting lineup, I would bring him into the game just after the mid-point of the 1st quarter. He would substitute in for a player that was in foul trouble or was underperforming, and quickly the score would go from 8-7 or 10-8 to 22-10, or more. His energy level shocked our opponents and improved our tempo on the court, and very quickly teams would succumb to the relentless pressure. That team finished 24-1 for the season and won the European International Schools tournament, largely because we maximized the effects of his talents.

There are many ways to utilize the talents of your players; it’s up to you to put them in the best possible position for them to succeed. Identify where your strengths are and use those strengths to put pressure on your opponent, not on yourself.

I’ve had a lot of teams ask me what the ideal coaching candidate looks like. Fortunately, there’s a recipe for success that’s been duplicated over and over again at the high school, college, and professional levels. The ideal coaching candidate is somewhere between the age of 40 to 60, and for good reason. Coaches that fall within that age range have typically amassed an extensive amount of experience within the game but are still young enough to remain open-minded about new concepts. It is an undeniable “sweet spot” and finding a talented coach in that age range can be a huge advantage for your team.

Import coaches around this age with real quality are difficult to find, though not impossible. Most coaches that fall within that range are likely to be well into their careers in the U.S. or Canada, and are less likely to consider options in Europe. If you’re intent on finding an import coach, however, there are two alternatives outside of this age range.

If you have to choose between a young coach (under 40) and an older one (over 60), I like the idea of hiring a young coach, who is likely to be more open-minded and innovative in adopting new strategies. You’re sacrificing experience for innovation, but in American football innovativeness is more valuable than gold. The great coaches throughout history have been mainly applauded for implementing brand new concepts to the sport, and this quality should always be nurtured and encouraged.

Young import coaches are often willing to gain experience coaching abroad before returning to North America to pursue their careers. You can often find some stellar coaches this way, whom have an interest in experiencing the world and want to take the fast-track to a head coaching position.

That said, there are several excellent coaches that have coached in Europe well into their 70’s and have been quite successful. The issue is that there have been just as many who have wreaked havoc on their respective organizations by being set in their ways and being unwilling to adapt to their players or new ideas. This can often come off as abrasive with teams who are looking to instill a positive environment within their organizational culture. It is a sociological fact that we become more conservative in our approach and perspective as we get older, and football is no different. The problem is that the sport of football changes drastically every 10 years or so, and coaches need to remain nimble and innovative enough to adapt to new strategies and techniques. Additionally, a coach that comes to Europe after retirement may be there for a paid vacation, not to help build an organization. Be smart enough to know the difference.

Lastly, don’t get too enamored with coaches who have had NFL or NCAA Division 1 experience. NFL coaches are more focused on strategy than technique. They may also have unrealistic goals for your organization, which could lead to personality clashes. That is not to say that this experience isn’t valuable, but you’re much better off finding coaches who have had experience at the high school level. These types of coaches are more interested in teaching the fundamentals of the game and have worked with levels of talent that are likely comparable to your organization.

I’m a big supporter of exhausting all coaching possibilities, either domestic and import coaches. You should hire a coach that fits within the culture of your organization and will inspire your players to be better than they currently are. Most importantly, your coach needs to be a good person that your players can look up to. He or she needs to set an example for your team, and they’ll also be an ambassador for your organization every time you play.

As with anything, do your research and make sure you’re bringing in the right person for your organization. A coach can either be a godsend or a cancer for your team, so don’t take commitments lightly. If you need some suggestions or advice, please contact us for support.

If you’re smart and approach each situation objectively, you’ll put yourself, your coaching staff, and your team in a position to succeed. Best of luck.

What are your thoughts on this article? Do you have any suggestions for coaches or teams? Let us know in the comments section below.