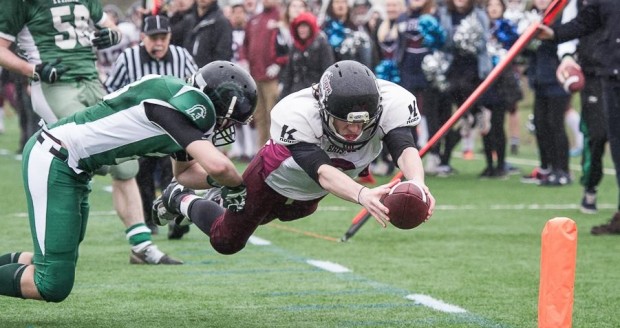 By chance, a choice of clothing led former University of Wisconsin quarterback Clay Rust on an unexpected football journey in England.

Rust, a chemistry major at Wisconsin, quit the Badgers football team after the 2012 season and moved in the fall of 2014 to Bristol, a city in the west of England, for an academic year to further his studies. Unexpectedly, he found himself as the starting QB for the Bristol University Barracuda American football team.

The Barracuda sensed a potential new teammate when they spotted the 6’5″ student in a Wisconsin sweatshirt at the annual ‘freshers’ fair’ – where student societies and sports teams seek to attract new members. They had unwittingly recruited a player experienced in the professional-like American collegiate system.

The 21-year-old had been a “walk on” at Wisconsin, a member of Division 1’s Big Ten Conference and the alma mater of Seattle Seahawks’ Super Bowl winning quarterback Russell Wilson. A “walk on” is a non-scholarship player who has been admitted to the university purely on academic merits, having earned a spot on the team outright.

While Rust decided to keep his football pedigree to himself before attending the Cuda’s annual tryouts, his new teammates had already discovered (via internet research) that they’d unearthed a potential gem.

“I was walking around the freshers’ fair wearing a Wisconsin football sweatshirt and didn’t even think twice about it. As I was walking around, a couple of the guys from the team flagged me down and asked if I’d be interested in playing football. I said, ‘sure I’ll give it a shot’,” said Rust, who until then had no idea the university even had a football team.

“A week later we had our first tryouts and I’ve been here ever since. I certainly didn’t tell them I’d played for the University of Wisconsin. I wanted to earn my own way onto the team, and I didn’t want to give a false perception that I felt like I deserved special treatment for having played football in the states.”

“But they actually all knew about it before I knew they were aware of it,” Rust laughed. “They had looked up a bunch of my old high school films to see who I was. They knew a lot more about me than I had shared with them.” 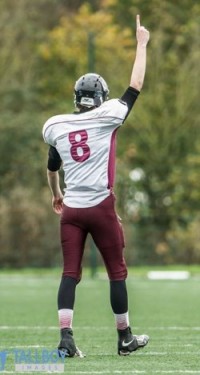 On the field there has been no hiding Rust’s quality. He has led the Cuda – who won just one game last season – to a 3 and 2 record this year in the British BUCS university league division one. Most recently, Rust ran for two touchdowns against the Swansea Titans and capped an impressive fourth quarter drive with a seven-yard TD pass with only 30 seconds remaining on the clock to seal the game. It was the first defeat in more than a year for the Titans, who were last season’s second-tier national champions.

The contrast between university sport on opposite sides of the Atlantic, however, could not be greater.

British university sport not only lacks the television money and media attention lavished on teams in America, but even the most popular sports of soccer and rugby are often played in front of only a handful of friends and family and on playing fields rather than in stadiums.

Rust, who would suit up every week to run out onto the field at the Badgers’ vast 80,000 capacity Camp Randall Stadium and in some even bigger venues for road games, says he has an appreciation for both extremes of American Football.

“We played in front of 80,000 screaming fans. Everybody’s hammered and dressed in red and making crazy noise,” says Rust of game day in Madison. “I loved it. It didn’t matter if I played in the game or not, it was just awesome being there in that environment.”

While the Cuda squad can number up to 70 as opposed to the more than 100 players on the Wisconsin roster, Rust says tighter bonds are formed in Europe than on an NCAA team. “At Wisconsin you make personal connections with certain people, usually your positional groups or the people you live with. But here it’s so much smaller that everyone kind of forms into a tight-knit group. I like that. You trust everybody and they trust you too.”

As a backup QB at Wisconsin, Rust’s main responsibility was in daily practice sessions on the “scout team”, where he played the role of the upcoming week’s opposing QB against the first-team defense. “One quarterback that comes to mind right away would be Nebraska’s Taylor Martinez,” Rust said of the players he emulated.

“It was an added bonus to be able to play football there,” said Rust of Wisconsin, and who will return to the university, but not the football team, to complete his undergraduate studies. “There were a few colleges interested in me during my junior year of high school but then I injured my knee the summer going into my last year of high school and everything kind of fell off the table. The schools that were looking at me were the Ivy League schools out east, and maybe I wasn’t quite the talent caliber to get a Division 1 scholarship. But I talked to Wisconsin late in the year and they gave me a shot.”

Rust’s decision to swap America’s Midwest for the West Country was very academically motivated. “I wanted to get away and travel, but it was primarily the quality of the school that brought me here,” noted Rust.

After agreeing to play for the Cuda, Rust says he was unsure of what to expect but is enjoying the competitive nature of the British university league. After half a season, the Cuda are one of five south west conference teams still in the playoff hunt.

“I didn’t know what to expect at first. I didn’t know if it was going to be like high school, if I was going to underestimate people, or if they were going to show up with more depth than I expected. But it’s been a very solid level of competition. Everybody has given us a great game and there haven’t really been any days where we could just show up and not try and still go out and win.” 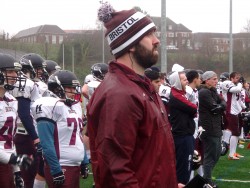 “It’s definitely a higher level than in high school. Back home, I grew up playing football since I was five, six, seven-years-old, having a football in my hand rather than a rugby ball in my hand or a soccer ball at my feet. So I think back home everyone’s a little more natural with it and there’s a greater fluidity to it. But the effort is well beyond what it was in high school, and I think they have more of a love for the game because the sport is not taken for granted here.”

Cuda head coach Jimmy Anderson says “other than a big arm and a weird accent”, Rust is just another member of the team. Still, he admits to being excited by what the NCAA-schooled QB offers the team.

“He opens up more options for us and more advanced ways of thinking. Bristol University students are pretty smart too, so they pick up things pretty quickly. It’s been pretty fun for me as an offensive coordinator as well to have a new ‘toy’ to play with and call all the fun stuff.”

The second-year head coach, who has 17 seasons playing and coaching behind him, says Rust has had to adapt to keeping things simple but has proved to be a reassuring presence on the field. “Having a playbook that’s a quarter of the size that he’s accustomed to must be a little frustrating sometimes, but it is what it is and he’s opened us up a lot more and we can do a lot more things than before. Many British quarterbacks can throw a ball 40 yards downfield, but it’s the checks at the line, the confidence we now have in the passing game, and things like that make the difference.”

Perhaps no player on the field has a closer relationship with the QB than Dave Johnson, the team’s center and fourth-year lineman. Johnson says Rust has boosted the entire team’s confidence. “As a player he’s fantastic. As a teammate he’s great. He really helps us develop as a team and we all play at a better level by having him here.”

It’s been a great exchange for both parties: Rust gets to enjoy the experience of playing American football in Europe, while the Barracuda benefit from his talent, knowledge, and enthusiasm for the game. It’s sure to make for an exciting finish to the season.

Twm Owen is a Welsh-based weekly newspaper journalist, blogger, sports nut, and American Football enthusiast. He played youth football with the Cardiff Mets and Tiger Bay Warriors in the Welsh capital and was a proud understudy to the starting quarterback, his older brother. You can follow Twm on Twitter (@NewsatTwm), on Facebook, or check out his blog here.