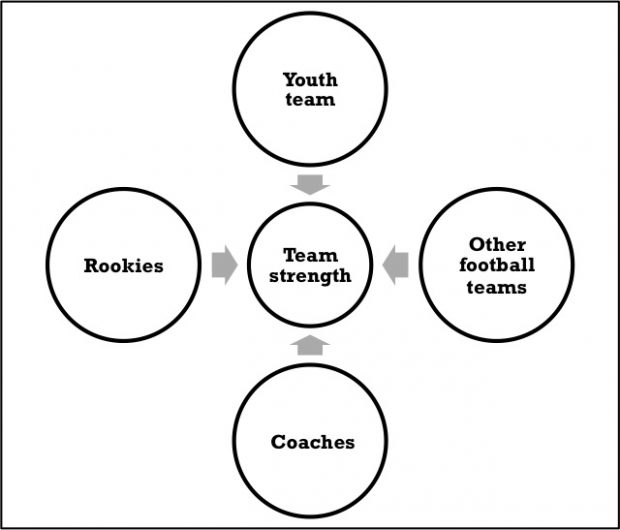 This series of articles will look at select models and apply them within the context of American football. Based on the findings, several implications will be made that can help to not only make a team better, but also the entire organization.

If you haven’t read part one of this article, please click here. It will give you a quick explanation of Porter’s five forces analysis as well as how you can use an analysis such as this to improve the organizational and financial structure of a football team.

As we’ve seen in part one, Porter’s five forces analysis assists in identifying methods that can greatly improve your organization.

However, this type of analysis can be far more than just a tool for financial purposes. With only a few small adjustments, you can also utilize it to improve your team’s level of play.

Here is how it’s done:

In order for this model to be applied to a team, you need to view the team as an entity which can be influenced by several factors. For the purposes of conveying these principles, I will stick with the structure established in the last article. That means that we will look at factors that supply the team with new players, as well as the threat of other teams recruiting from amongst your own player roster. In reference to the factor of the “Bargaining Power of Buyers” (referenced in Part 1), we will substitute coaches in place of the buyers in order to include them in the analysis. Moreover, we will consider rookies separately from youth team players, as they are acquired differently and therefore must be analyzed in a different way.

To maintain the structure established in the last article, we will start by addressing rookie players:

A football team can acquire new players in two different ways: They can develop young athletes who will later be a part of the senior program (adults) or they can recruit adults who are interested in playing American football for the first time. Although new adult players and athletes who have been developed through the youth teams are both considered rookies during their first season with the senior program, they must be treated differently due to the gap in experience and physical skills.

When dealing with rookies, training in both the physical and theoretical aspects of the game are essential to improving their respective levels of play. This process takes time and dedication, so be sure to do it in a way that does not impede the progress of veteran players while instructing your rookie players. If you have the manpower, it is advisable to separate the rookies from the rest of the team during practice in order to train them in a manner that gives them enough time to catch up with the veterans. In the meantime, the seasoned players can continue their training without being slowed down by less-experienced players.

If you do not have enough coaches to train the rookies separately, you could ask your veteran players if they are interested in and willing to help develop them. Another potential option is to encourage your players to organize informal practice sessions outside of normal practice hours. Players who live in the same areas can meet and work on their skills independently, utilizing public facilities if they are unable to practice on the team’s field.

An extension of this would be to schedule a separate practice session during the week dedicated to rookies. This way players can safely learn the fundamentals without having the pressure of performing well under the eyes of coaches and veterans. Ideally, these practices would be held before normal team practice sessions so that rookies can immediately showcase their newly acquired skills, maximize their time, and limit their number of trips to the field.

Learning the depth of the rulebook can sometimes be an overwhelming task for newcomers. It is therefore important to ease them into the theoretical part of American football by breaking down the game and explaining the rules to them in a way that they can understand. One way to do so is to first teach them the absolute fundamentals of the game such as the scoring process, downs and distances, positions, and so on. Next you can delve into the finer nuances of the game. This way they will have a theoretical basis to build on, rather than learning all the rules without understanding the context in which they fit.

It is advisable to spend five to ten minutes before or after practice to speak to rookie players about the rules of American football to check in on their learning progress. An easy way find out is to quiz them about various rules or game situations. Using this method, you can easily test their level of knowledge and can better plan future theoretical lessons.

Another fun way to test their knowledge is to quiz them using a multiple-choice test. To increase their motivation, you can reward the best performers with prizes.

If you have players on your team who also serve as referees, it may be wise to organize a “rulebook day” where all fundamental rules as well as changes can be discussed among the team, thus giving both rookies and veterans a chance to stay up-to-date on their theoretical skills.

In a sport with multiple divisions and varying degrees of performance levels, there is always the possibility that opponents may try to lure certain players away from your team. Especially when those teams play in a higher division than you or have the financial resources to offer payment or other incentives, it can be hard to convince your players to stay. If you cannot match the promises given to the players by other teams but want them to stay with your team for the foreseeable future, the best thing to do is to appeal to them on an emotional level. Do your best to convince them that the intangible benefits of your team surpass the financial ones of the other football club. It is advisable to approach them and tell them their role for the upcoming season and the goals you want to achieve with them during the year. Make them feel that they belong with the team and that they are a valued, respected, and important part of your organization.

In order to build a perennially competitive and sustainable team, it is of the utmost importance to have a functioning youth team. Not only does it provide your senior team with new talent, but is also heavily reduces the time it takes to develop them into full-fledged football players. Unlike true rookies who might need years to develop into starters, youth players can sometimes serve as plug-and-play athletes ready to support your team. Always be aware of how many youth players will be joining your senior team for the upcoming season, what position they play, and what their level of talent is. By doing that, you can incorporate them in your game plan well before they even practice with your senior team for the first time. The earlier they get quality instruction and guidance on how to continue improving at their respective positions, the greater the impact they can have on the team.

You can even take a step further and support your youth team directly. If the possibility exists, let certain position players practice with your seniors, so long as it does not slow the pace of your team. Not only can youth players learn from practicing better drills and soaking up the knowledge of senior coaches, but the senior players can act as observers as well, showing them ways to improve as the drills progress. In general, try to grant your youth team as much access to the senior players as possible. If they can get quality attention, imagine how good your senior team can be in the future.

The strength of a team is usually not determined by the players’ level of talent, but rather the coaches’ ability to turn that talent into a disciplined team. All the talent in the world is useless if practices are organized poorly, the playbook does not utilize the players’ strengths, or plain and simple, there are not enough coaches for each position. First and foremost, make sure that you have as many coaches as possible, regardless of coaching experience. It is better to have a less experienced coach manage a position specific practice than to have no one for the job and to have players practice useless drills. The more position coaches you have, the more detailed work you can get in with your players, and the better you get as a result.

A good option to attain new coaches is to ask veteran players at the end of their playing careers if they are interested in coaching. More times than not those players are glad to continue their work within the organization, plus with their years of experience they are well-respected amongst their former teammates. They also know the strengths and weaknesses of the team, therefore they don’t need time to become acclimated to the program. In order to prevent them from feeling overwhelmed with coaching positions of great responsibility such as offensive or defensive coordinator, ease them into the process by giving them position coaching jobs. This way they can learn the essentials of being a coach without forcing too much pressure on them in the beginning.

Once you have all the vacancies filled, make sure to support your coaches’ development. Send them to training programs, clinics, and conventions in order to improve their knowledge and skills. One such example is the Bavarian Coaches Convention, where coaches meet at the Adidas headquarters every year to discuss the newest trends and tactics in American football. Speakers are often domestic and international coaches from the highest divisions in Europe. Furthermore, the Bavarian football association demands that every team send coaches to this convention, ensuring that every team in the state has the chance to improve. Don’t hesitate to invest in the development and success of your coaching staff.

Porter’s five forces analysis can be applied to virtually any concept. Aside from the general approach of an American football organization, you can also analyze position groups, players, or the team playbook, just to name a few examples.

As we have seen, looking at your organization with an easily applicable model can be very useful in finding new approaches to improving your team. In a few and simple steps, you can analyze your team’s status quo and evaluate current developments. Based on those findings, you can steer your club in a direction that leads to success both financially and on the field.