From an early age, children in the Netherlands are generally quite active and are involved in a broad variety of sports including soccer, field hockey, volleyball, gymnastics, and more recently, all forms of American football. However, when children turn 13, there is a relatively steep decline in participation of approximately 11% when it comes to these sports.

There is another steep drop-off in sports participation when children turn 18. This, of course, is when children graduate from secondary school and begin university. No longer children, these young adults face even more intense academic pressures. They also have almost unfettered access to the world around them, being able to indulge in nearly any course of action that attracts their attention.

However, as they grow up, these changes within the social and academic dynamic experienced by Dutch children are not at all unique to Holland. Children all over Europe and the world go through very similar transitions as they age.

What is unique about Holland, though, is the existence of several government agencies dedicated to understanding how to reverse these trends. One group in particular, the Utrecht Sports Association, is a local Utrecht initiative. It is funded by taxpayers and works to keep children involved in after-school sports. The goal is to make after-school sports clubs as accessible to Dutch children as possible. The Dutch national Olympic committee is a national power which works to motivate children to participate in sports as much as possible. Another group, Jong030, focuses on and works with economically disadvantaged children in Utrecht. Additionally, the city of Utrecht itself offers a “UPas” (Utrecht Pass) to children coming from lower income families so they are not financially excluded from participating in sports, which in addition to transportation costs, require equipment purchases and other expenses.

It is within this wonderful context that the Utrecht Dominators Club avidly works to make American football accessible to Dutch children of all ages. In the words of Mr. Ilja Tersteeg, the founder of the Dominators, the club “works closely with local organizations that have been created to offer a more diversified choice of sports to kids and which are trying to help children enter sports. Our main focus is trying to develop American football and flag football in Utrecht so that as many kids as possible have access to the sport, and therefore become increasingly attracted to it.” It is worth nothing that the Dominators are not on a solo mission in Holland; The Hague, Lelystad, and Amsterdam also run great school flag football programs under the same guiding motivation. 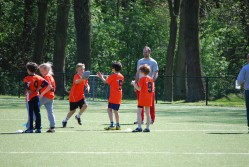 The Dominators organization does many things internally to reach this end. First of all, the club keeps entry fees as low as possible so that joining their American football club is as affordable as possible for every family in Utrecht. In addition to making their club as accessible as possible from a financial standpoint, the Dominators have also made their club accessible regardless of age or gender. The Dominators have flag football teams for children aged 12-15, adults aged 16 and older, and hope to add a team for children aged 8-12 soon. They also have tackle football teams for Cadets, aged 14-16, Juniors, aged 16-18, and Seniors, aged 18 and older. Girls are welcomed on all the teams and are on the roster of both flag teams. “We believe that sports are an essential part in creating a balanced and healthy life,” notes Mr. Tersteeg.

Beyond the context of their own highly inclusive club, the Dominators work with a local initiative called Hearts for Sports to get directly involved with schools all around Utrecht in order to help develop American football and flag football. They also work closely with Olympos which is the Utrecht student sports provider. Together with Olympos, every spring, the Dominators run two 9-week flag football courses for students. It is their goal to create a national student championship tournament.

Overall, the Dominators work hard to make regular appearances in all 16 schools in Utrecht in order to fulfill a variety of needs. The Dominators conduct formal clinics at the schools where they teach students about flag football and how to play the game. They also instruct teachers and coaches at these schools how to run a flag football program so that the sport is as enticing to students as possible. They have even produced a flag football manual, and they simply give it away to schools so that they can implement and maintain flag football programs with greater ease. Mr. Tersteeg says that the whole point behind these efforts is “to grow the roots of the sport so that it can take on a life of its own and sustain itself.”

The Dominators also praise the virtues of the sport in their promotion of it. They explain why it is a uniquely beneficial sport for children. Practically speaking, there is rarely-ever a waitlist to join a flag football program, which is not the case with the more traditionally popular sport of soccer.

Additionally, flag football is a coed sport where everyone plays together. The sport also boosts creativity, because teams have to come up with their own playbooks. This in turn promotes working together, because only teams that have effective playbooks and the chemistry to execute the plays will find success. Moreover, the sport promotes trust because everyone on the field has his or her own specific assignments and everyone depends on the fulfillment of those assignments in order to execute their own. Finally, American football is impervious to the superstar effect, where teams are built around single athletes, which frequently is the case in soccer, basketball and numerous other sports.

Given this perspective, it is no surprise that the Dominators even run flag football clinics in multiple youth detention centers across Holland.

The Dominators have been doing this work for the past 10 years and their vision has only become more inclusive and further reaching. “We want to get flag football fully established as a mainstream sport that is offered at schools all across Holland,” explains Mr. Tersteeg. “We want a person interested in the sport to be able to play from secondary school, through college, and even beyond.” The transformation of this idea from a dream into a reality is not far off when a club like the Dominators encouraging this to come into fruition.

Bravo to everyone involved in the Dominators organization. Your work is much appreciated.