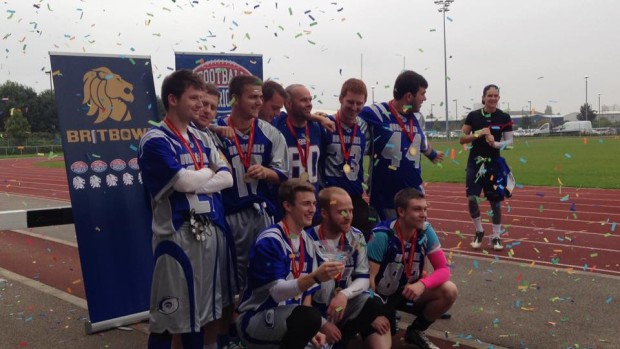 (Courtesy of Pulling the Flag UK)

You may argue that for some positions such as linebacker or lineman, there isn’t much value in playing flag football before transitioning to tackle football. However, through my own experience I’ve witnessed how flag football can offer tremendous advantages for players, regardless of position and size. Additionally, flag football can also be a platform for establishing a steady supply of new talent to the sport as well as increasing public awareness for American Football in Europe.

For those of you who are not familiar with the differences between flag football and tackle football, here is a short summary: In flag football, very little contact is allowed. Rather than tackling, the defense’s objective is to pull the flags of the ball-carrier to end a down. These rules give children the opportunity to start playing football from a young age without the fear of being hit by a player twice his or her size.

This brings me to my first point: the very limited amount of contact, or, in some variations – such as 5 vs. 5 – a complete lack thereof. At first it might look silly to strip the game of the one thing that makes football what it is: the physical aspect of the game and the endless hits and collisions. But as a child, you simple do not yet have the physical attributes required to withstand the rigorous battery of non-stop contact.

Rather than taking a physical pounding at every practice session, children can enjoy learning the nuances of the game and improving on their technique. Especially for skill position players such as receivers and defensive backs, this gives them a huge advantage. Imagine a receiver who can concentrate on his route without having to worry about facing press coverage from a cornerback or about being hit by an outside linebacker. At the same time, due to the fact that he is not allowed to disrupt the receiver, the defensive back has to rely solely on his footwork and technique to cover him. Players cannot physically overwhelm their opponents simply by being the biggest or strongest player and hitting everything that comes their way. They have to rely on their fundamentals to make a play.

This emphasis on technique over physicality not only protects children while they’re still developing physically, it also gives them time to focus on the play call and what to do in game situations. If you’re worrying too much about your assignment while lining up, your technique tends to go down the drain.

This advancement in skills was of tremendous help to me when I made the jump from flag football to tackle football. Despite being only fourteen years old at the time and not possessing the ideal physical stature you look for in an American football player, I could often beat my opponents by having superior technique and a better understanding of the game. This situation repeated itself when I went from the junior program to the senior team. While being only eighteen years old, I was able play as a starter from the first game onward. Coincidentally, the other starting receiver was a fellow flag football teammate of mine. With our years of experience, we possessed better skills than our teammates who were in their mid-twenties and had never played flag football or youth tackle football.

This model for a steady improvement of athletic ability through playing flag football at an early age has a lot of potential. Not only can it help to raise the overall level of play across Europe, but it may also give promising young players the opportunity to play at an American high school and even receive a college athletic scholarship.

The advantages of limited contact don’t stop there. The most obvious reason that flag football prohibits tackling is to reduce injuries. A general perception of American football in Europe is that of a cruel sport, where unintelligent men use every excuse to harm each other. Compared to soccer – the continent’s favorite pastime – American football is violent and brutal. Through this context it is understandable why parents shy away from letting their children play organized football and prefer to see them excel in other sports. Flag football gives concerned parents a great alternative for guiding their children’s first steps in their respective athletic careers, where they can improve their skills in a safe environment. After all, protecting our kids from harm should be our most important objective, knowing that children take longer to recover from injuries and have a higher risk of suffering long-term damage. According to a 2013 report by Safe Kids Worldwide in which children aged 7 to 17 were observed for a full year, 14% of sports-related injuries among the children studied were injuries to the head. The report further shows that the risk for concussions is higher in tackle football (11 concussions per 1.000 athletes) than in other popular sports (e.g. 3 in basketball, 4 in soccer).

In addition to protecting young athletes from injuries caused by external force, flag football also provides the tools for preventing non-contact injuries. The key to this, as noted previously, is the focus on proper technique. During my rookie season on the senior team, our team suffered three season-ending injuries in training camp alone. Though they were each different injuries, there were two common themes: all injuries were self-inflicted and all players were rookies, having only played football for just a few months. In contrast, my sole major injury in nine years as a player occurred on a contact play. If we focus on providing kids with a safe environment to explore American football, we’ll have the opportunity attract more young athletes to the sport and increase the talent pool of European players.

However, the pros of playing flag football are not only athletic or health-related. There is a social factor that can’t be dismissed: the possibility for children who are overweight or have poor coordination to play organized sports. These kids are typically discouraged from joining local sports clubs due to their lack of athleticism, and in most sports the level of play is already too advanced for them to catch up if they get a late start. Flag football can give these kids the opportunity to be a part of a team. With American football’s relative high age of entry, even young kids that haven’t played sports in their entire lives can be athletes. Not only that – football truly embraces the big boys. They are a vital part of the team and are often the decisive factor in wins and losses. Giving these kids a sense of belonging and positive reinforcement can highly increase their self-esteem. These kids make new friends that they otherwise may not have made and they experience the value of teamwork, a fundamental principle that is valuable beyond the game of football.

This perspective not only works for children with weight issues or lack of athletic experience, but with minority groups as well. Team sports have always brought people from different countries, ethnic groups, and religions together. With regard to the huge influx of immigrants in recent years, flag football could be an important tool for cultural tolerance and assimilation.

If European football clubs can acknowledge this great potential and get more boys and girls to play flag football, they can help to expand the rapid growth of this great game even further. This promotes a decrease in the risk of injury, an expansion in the number of talented young players, and contributing to society with important lessons of discipline, respect, and teamwork. The values of flag football are numerous, and we should seek to provide kids with the opportunity to play the game as often as we can.