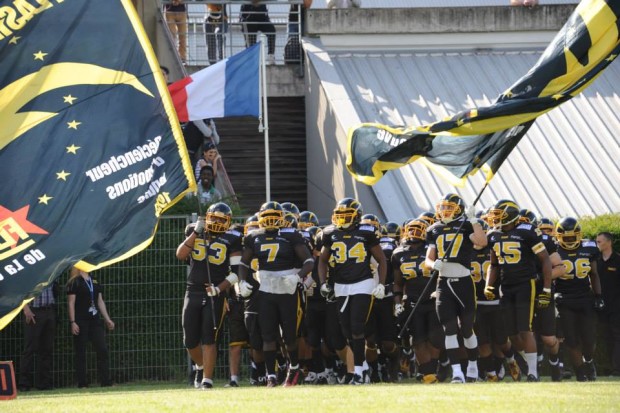 The Flash de la Courneuve taking the field in France.

American football in Europe is still in its formative years. Despite the fact that many clubs date back to the late 1970’s, that there are currently well over 1,500 teams peppered across 41 countries in Europe, and that the popularity of the sport within the many cultures of Europe is widely growing, most teams are still in the developmental stage.

First of all, the field and player equipment necessary for a fully functioning team is expensive. Moreover, reliable access to field space is frustratingly elusive with priority given to soccer and rugby teams. To field schedulers, American football appears to be an afterthought. Additionally, the dominant sports culture of Europe, with its fierce loyalty to soccer and rugby, tends to greatly resist the growth of this great game. National sports have deep roots grounded in cultural allegiance, and Europe is no exception. It is not surprising then, that many of Europe’s finest aspiring athletes are simply not willing to leave the promise of the dominant sports of soccer and rugby to join this upstart movement.

Why then, when nearly every American football team in Europe is still in development, has a team in Vienna, with great ambitions for professional success, chosen to give hundreds of thousands of its precious Euros to the survivors of domestic violence? Why has a team in France, a country where American football is broadly prevalent and highly competitive, expended valuable resources to establish a boarding school so that disadvantaged youth from Tahiti may be given the life-transforming experience of coming to Paris to play American football with their French sisters – that’s right, sisters – and their French brothers? Why has one man, coaching for a team in far away Eidsvoll, Norway chosen to found a non-profit organization which aspires to start an American football club in the slums of Nairobi?

The Vienna Vikings are one of the true powerhouses in Europe. Tenaciously competing in the Austrian Football League, they emerge at or near the top of the league year in and year out. When asked what his future ambitions were for his team, Mr. Karl Wurm, President of the Vikings, seemed almost surprised by the question and promptly said: “to be the best team in Europe, of course.” 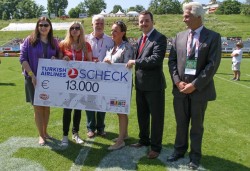 Check presentation at the 2014 Charity Bowl in Vienna, Austria (Courtesy of Nutville/Austria)

However, beginning in 1999 and continuing every year since, the Vikings hold a game called the Charity Bowl. The proceeds from this game are donated to charity, with the primary recipients being Viennese organizations devoted to the survivors of domestic violence. Over 40,000 people have attended these 17 Charity Bowls. This year, the game will feature two of the top teams in Europe when the Vienna Vikings face the Schwäbisch Hall Unicorns. The total amount donated thus far exceeds €135,000. When you take into account the time, energy, and resources expended by the Vikings to organize, promote and execute these games every year, it is clear that this figure, although quite impressive in and of itself, does not fully represent the sacrifice made by the Vikings towards this noble cause.

The Vikings want to be the undisputed best team in Europe for the foreseeable future, and, at the same time, they’ve actively expended valuable energy, human power, and money on causes which have nothing to do with this ambition. They’ve done this merely because, as Mr. Wurm put it, “strong organizations have large social responsibilities.” This perspective is selfless and truly admirable.

Another European powerhouse, the Flash de La Courneuve, works wonders in the outskirts of Paris. Mr. Bruno Lacam-Caron, the general manager of the team, described how “the underlying mentality of the Flash program is to create a fundamentally new approach to life, where all stereotypes are broken and all prejudice is challenged.” The ways in which the Flash organization manifests these words are abundant. 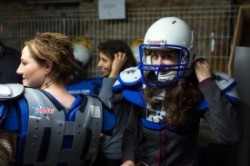 The Flash women’s team getting fitted for equipment.

First of all, the Flash was one of the first American football organizations in France to have a women’s team. Mr. Lacam-Caron explained how, just 3 years ago, the Flash barely had enough women to field a team. Now, more than 40 women make up the roster for the Flash’s women’s team – a roster which includes a lawyer, a police officer, and 5 teachers, among many other professions. The successful example set by the Flash organization has led to the sprouting up of women’s teams all over France. After 3 years of promoting women’s American Football, there are now 7 women’s teams competing in the greater Paris area alone. It is projected that next year, there will be over 20. Mr. Lacam-Caron described with enthusiasm the deep passion that French women have for the game, and expressed his heartfelt happiness that the growth of American football in Europe is attributable to both genders.

Moreover, the Flash are currently in the process of establishing a boarding school so that players from Tahiti can come to live in France, go to school, and play for the Flash – again, all for free. This is a full scholarship program established by Mr. Lacam-Caron, and there is already sponsorship for 5 Tahitians, with funding likely to arrive soon for an additional 5 more.

Perhaps the most telling example of how the Flash seeks to effectuate social change is the new diploma program that it is currently developing. The Flash are actively working with college professors, police officers, professional educators, and psychologists to create an unprecedented study environment and a diploma for social and sports educators. The course of study will focus on diversity, international awareness, and cultural sensitivity. The objective behind establishing this course of study is to facilitate the “fundamentally new approach to respectfully living together,” described by Mr. Lacam-Caron as the underlying purpose of the entire Flash organization.

Mr. Greg Kleidon, a teacher who coaches for the Eidsvoll 1814’s of Norway also co-founded the non-profit organization called the Golden Leaf Academy. Mr. Kleidon’s own words describe this impressive organization best: “Our main goal is youth development. We are seeking to give young athletes the proper knowledge and foundation to develop and maintain a positive and healthy lifestyle. Our motto – “Be Active” – is what it’s all about. This means be active in the community, at home, in the classroom and on the field. We want everyone to be the very best version of themselves, and with our guidance as coaches and mental trainers, we feel like we can achieve just that.” 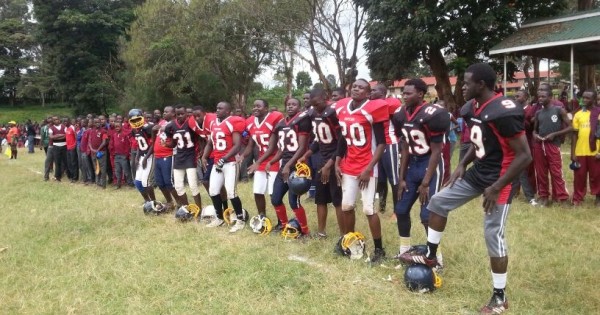 The Mighty Nyati of Nairobi, Kenya.

However, the ambitions of Mr. Kleidon and the Golden Leaf Academy extend well beyond the Eidsvoll 1814s and the Norwegian youth. Plans are already in motion to expand his mission to some of the most disadvantaged youth found anywhere on Earth. Outside of Nairobi sits one of the most expansive and destitute slums on the planet – Kibera. The immediate working goal of the Golden Leaf Academy is to create a youth team in Kibera, and more importantly, to link this team with the Mighty Nyati, a men’s team closely associated with the University of Nairobi. Not only will the youth of Kibera reap all the benefits associated with being a member of a vibrant and competitive American Football team, but they will also have a clear link to university, and with that link, an added incentive for excelling in school in pursuit of the dream of higher education.

I have had the pleasure of speaking with Mr. Wurm, Mr. Lacam-Caron, and Mr. Kleidon. I am here to say that these gentlemen are leaders of whom we should all pause and make note. The way these men use American football to fulfill their humanitarian ambitions not only makes them examples for us all to admire, but also makes their teams fiercer foes on the actual field. United by principles of compassion for humanity, they compete with great vigor.

Why have the Vienna Vikings, the Flash de La Courneuve, and the Eidsvoll 1814’s, among many other American football teams in Europe, emerged as inspiring examples of organizations which combine aspirations of professional success with guiding principles of powerful morally-driven convictions?

Perhaps it is because American football is unique among team sports in that nearly every position requires a completely different type of physical build and emotional mindset from those who step into the role. No matter who you are, there is a place for you on the team. From the kicker to the defensive tackle, an extraordinary variety of athletic and mental attributes are required. The unique requirements of American Football as a team sport may explain why, in Europe, the sport is increasingly utilized as a tool for stimulating greater social, ethnic, and cultural cooperation and tolerance.

Perhaps too it is because the game here in Europe exists as such an underdog in the shadows of the dominant giants of soccer and rugby. Every single American Football team in Europe, at one time or another, has fought against the odds to simply access field space when such access is nearly universally reserved for soccer and rugby clubs. American Football in Europe attracts underdogs by its very nature because those with a will to forge ahead against popular culture and all reasonable expectations are the ones who find success. Life’s underdogs know what it means to have to fight for what others are handed. So, perhaps it is no wonder that an entire sport existing as a quintessential underdog amidst the titans of soccer and rugby operates with greater conscious awareness of the inequalities permeating modern life.

Regardless, teams like the Vienna Vikings, the Flash de La Courneuve, and the Eidsvoll 1814’s operate in a realm far more profound than mere sporting competition – they are actively making the world a better place for all of us. Their work off the field of uniting many kinds of people in a common effort of goodness makes us all safer in an immediate and tangible way. They are examples to which we should all tip our hats, not only out of respect, but also out of deep gratitude.

May these teams continue to serve as an example for us all, and may they forever fuel passion, comradery, tolerance, self-sacrifice, and teamwork. May we continue to be inspired by the leadership demonstrated by these teams, as well as from the very real social progress they continue to achieve by way of this beautiful sport.