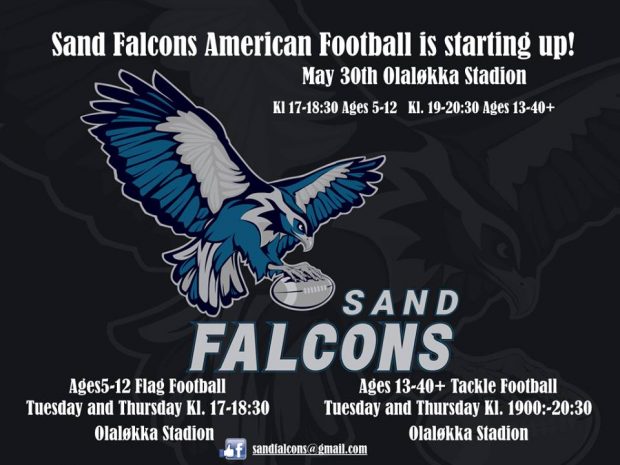 It’s always exciting to see new American football teams appear, regardless of the circumstances. To that end, we’re happy to announce the arrival of the Sand Falcons – Norway’s most recent addition. This organization, however, is not your average American football club.

First of all, the Falcons are led by General Manager and Head Coach Greg Kleidon. Mr. Kleidon is not only one of Europe’s most dedicated and successful coaches, but he is also the co-founder of The Golden Leaf Academy – a non-profit organization that teaches and promotes healthy activity among the youth of Norway and beyond. He also led the Eidsvoll 1814s to multiple national championships. In short, Mr. Kleidon has proven again and again that he knows how to inspire young athletes to use sports as a positive and productive outlet as well as how to win football games.

In his own words, Mr. Kleidon shares the vision behind this new organization: “We are extremely excited to announce the start of Sand Falcons American Football at Sand Idrettslag. Together we will partner to lead activities for children and adults alike, from 5 years old and upwards, providing a proper environment to Spread Your Wings and learn through sport. We are dedicated to leading the charge in public service and growing the leaders of tomorrow by building them up on the field and in the classroom.”

“From 5 to 12 years-old, we will be focusing heavily on teaching flag football, where we will develop the skill sets necessary to take a step by step progression to tackle football, which we will start at age 13.” This approach is reminiscent of the approach adopted by many clubs in the Netherlands, particularly the Utrecht Dominators.

So many teams in Europe suffer from a depletion of talent once the founding core of players retire. It can often be difficult to bridge the gap and create a sufficient flow of new players to survive beyond a few years. It is inspiring to see that the more sustainable and progressive approach to developing a long-term program is being wholeheartedly adopted.

At The Growth of a Game, we are dedicated to facilitating the development of American football in Europe. We are proud to be supporting Mr. Kleidon and the Sand Falcons to the full extent of our capacity. We highly recommend that anyone interested in learning more about how to run a top-quality American football organization follows the Falcons on Facebook.