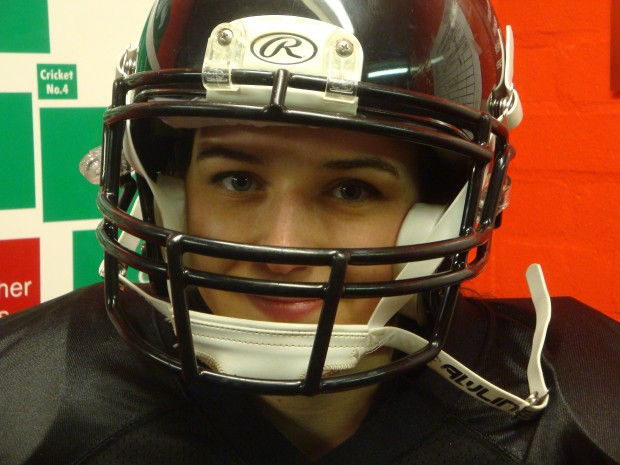 Fiona Quimbre suiting up for the Cardiff University Cobras in Wales

When Fiona Quimbre first tried out for Cardiff University’s American football team, not many who were present thought she would return. Five months later she became the first female to play for the Cobras.

The 18-year-old cornerback ran onto the field for her first taste of full-contact football in a live game for Cardiff’s end-of-season ‘friendly’ against the Bristol Pride. Her second quarter entrance saw her become the first woman to play for the Cardiff Cobras in its 29-year history, one of the longest-established British university teams. “The fact that the coaches trusted me and believed in me enough to put me on the field, I think that was the best moment,” Quimbre, a French national, reflected on her debut.

“Before I stepped onto the field my teammates were reassuring me, saying, ‘you can do it!’ I’m lucky to have such supportive teammates who rallied around me like that.”

Quimbre, who is from Brittany in northern France, is following a joint degree in politics and international relations. She splits her time between Sciences Po Bordeaux University in southern France and Cardiff University, Wales’ most prestigious institution. She began her first school year at the latter in September 2014.

At Cardiff University’s annual sports recruitment fair, Quimbre – a track and field star who boasts a 28-second personal best for the 200 meters and a five meter long jump – was quick to sign up for the American Football squad. She had developed an interest in the sport after first seeing a game as a 14-year-old during a high school semester in Canada.

“I just walked by and asked if I could play, and they said yes,” recalled the 5’5″ (1.65m) teenager who weighs just 123 lbs. (56 kg). “At the trial session the players were all very nice to me, but some of them told me they thought I was never going to come back, as they saw I was so tiny compared to them.”

“My parents are a bit scared for me,” she laughed when asked if he she had any concerns for her safety. Not that missing her weekly Skype session with her parents the day after a cancelled game, in which Quimbre had anticipated making her debut, helped allay parental anxieties.

“On Saturday evening, I had told my parents that I was going to play in the game the following day. The game was cancelled on Sunday and I forgot to text them to let them know. Usually we Skype every Monday, but I went to a concert that evening and didn’t answer their text so they were like ‘oh my god, she got hurt on the field, what happened to her?’ I was able to calm them down later.”

Under the rules of British University sports’ governing body, BUCS, American Football is classified as a unisex sport for institutions that don’t have a dedicated women’s team. Cobras club president and third year economics student Rhys Romo was aware of this and eager to recruit anyone, of either sex, interested in trying the sport. He recalled that Quimbre was one of a handful of female students who approached the team’s recruitment stand, but the only one to follow through on her initial interest.

A committed team member, Quimbre has attended every training session that her academic commitments have allowed. She spent most of the season as an unused squad member during the Cobras’ 7-1 season in the BUCS Division One, but still attended every game. “I assumed I wasn’t going to play at all. I thought, ‘well, I’m a first year player and I’m a girl. I’ll never be able to see the field.’ But I was fine with it, I just wanted to learn the rules and join in.”

The season included some journeys of more than 300 miles roundtrip by bus for road games. “We played in Plymouth, Exeter, Bristol, and Gloucester, so it’s been great to see so many different parts of the U.K.,” expressed Quimbre.

Romo, who plays running back in addition to serving as team president, said that Quimbre’s dedication was rewarded in the game against the Bristol Academy Pride.

“When I recruited Fiona at the sports fair, most people thought she wouldn’t stick around. But she did,” said Romo.

“She has come to every training session she can and has trained in the gym with the boys every Wednesday morning. She’s put just as much effort in, if not more, as the rest of her teammates. She really earned her time on the field against the Bristol Pride. She’s an athlete and an asset to the team.” 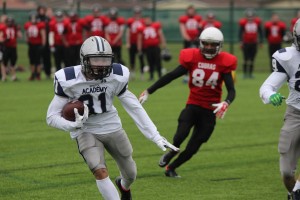 Though that debut came in a friendly, Quimbre faced the handpicked players from the specialist Bristol sports college. Bristol’s football program for students aged 16+ is intended to mirror those of American high schools.

The friendly was Bristol college’s first game against university-level competition, and both sides used it as an opportunity to play inexperienced players. The Pride recorded an impressive 30-20 victory against the older university team, which only fielded its starters for the first quarter.

When her chance to finally take the field came, Quimbre admitted to nervousness and not wanting to let her teammates down. She had a rough debut against a receiver she described as ‘twice her size’, but left feeling encouraged by her teammates.

“I was disappointed not to do a good job, but my teammates and coaches gave me a lot of support and let me know that it’s going to be better next time I get on the field. It was only my first game,” explained Quimbre.

The rookie, whose aspiration is to join the French diplomatic service on completing her studies, also felt a bit more extra pressure as a woman on what is usually seen as a man’s field.

The Cobras had previously informed its opponents as well as the sport’s governing body in Britain – the British American Football Association (BAFA) – that it was registering a female player, but it is unclear whether opposition coaches had told their players that a woman would be across the line of scrimmage from them.

“When we’d go back to the locker rooms after games some people would spot me and they’d say, ‘I knew it, they had a girl on the field’,” Quimbre remarked. “So I don’t think they knew beforehand.”

“Also when we shake hands at the end of the game some opponents are really surprised, because they say ‘well done, mate; well done, mate’ and then they’re like… ‘a lady?’,” said Quimbre, mimicking the raised eyebrows she’d often experience at the end of a game.

While Quimbre is satisfied that her efforts in practice have won over any potential doubters among her teammates or opponents, she never felt the need to prove herself as a female player to the Cardiff coaches. 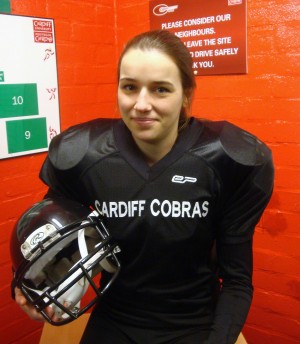 “I think the coaches already took me seriously from the beginning. Simon Browning [Receivers & Special Teams coach for the Cobras] is a really good coach. He was also aware that there are some women’s teams out there and knew that there are many good female players.”

Team president Romo doesn’t believe that there is sufficient interest among the female students of Cardiff for the university to enter a team in BAFA’s women’s competitions yet, but he’s hopeful that there will be a legacy left from Quimbre’s rookie season.

“The coaches and players think it’s good and progressive that women are interested in playing the game,” said Romo.

“A couple of girls took an interest but only Fiona turned up at the trials. I think next year it can be a lot better as we can say that we’ve had a girl who has played for us and girls can see it is a good environment for them to be in.”

Quimbre will return to France for the next academic year. She has already learned that there is a women’s senior team in Bordeaux which she may look to play for but is also considering a return to track and field.

However, when Quimbre comes back to Cardiff in September 2016 for her third year she is adamant that she will once more pick up her helmet and shoulder pads, and perhaps finally put the minds of her parents at rest. “They are probably going to come over to Cardiff when I come back in my third year and they want to see me play.”

It is likely Monsieur and Madame Quimbre will be joined by many more wishing to see their daughter succeed on the gridiron.

Twm Owen is a Welsh-based weekly newspaper journalist, blogger, sports nut, and American Football enthusiast. He played youth football with the Cardiff Mets and Tiger Bay Warriors in the Welsh capital and was a proud understudy to the starting quarterback, his older brother. You can follow Twm on Twitter (@NewsatTwm), on Facebook, or check out his blog here.