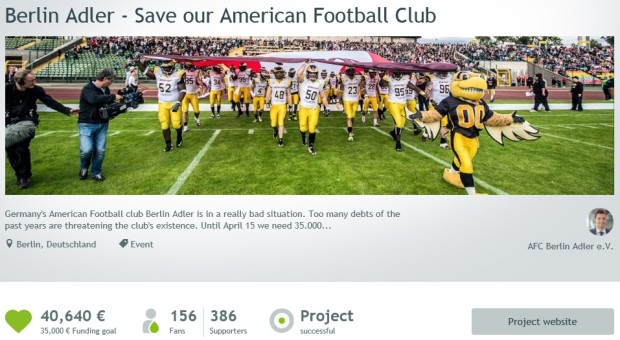 The Berlin Adler’s 2015 crowdfunding campaign on Startnext (Courtesy of Startnext.com)

We’re living in a digital age. It’s time to rethink the financing of amateur or semi-pro athletes and sports teams.

If you look at the websites of amateur sports teams, most of them seem to be stuck in 1998. The same problem occurs with earning profits. Most teams’ horizons end with sponsoring, ticket and concession sales at home games, and perhaps Fördergelder (government financial support). But there are new and innovative digital paths for teams to step into.

As much as crowded stadiums or plenty of online visitors to your official website are of commercial value, it is usually appealing to your potential sponsors to have a mass of followers on Facebook, Twitter and Instagram.

Another possibility on the rise is crowdfunding – online community financing through the internet.

In early 2015, two teams in the German Football League (GFL) were having major problems meeting the financial needs for their upcoming seasons. The Cologne Falcons, a semifinalist in the GFL playoffs the year before, were in danger of folding after losing their main sponsor in February 2015. On a Friday the 13th in March 2015, the Berlin Adler – one of Germany’s proudest football clubs with 6 German Bowl titles and 2 Euro Bowls (2010 and 2014) under their belts – were calling their club members in for a crisis meeting, to announce a 6-digit deficit. Ultimately €35,000 was needed as a short-term solution until mid-April to save the season for all the teams within the club.

The Falcons elected to save their season via the crowdfunding site gofundme.com and substantially failed to reach their goal. A goal of €250,000 was targeted, but in less than four weeks just a mere €930 was raised. As a result, the Falcons were forced to withdraw from the German first division and are now competing in a lower division.

The average successful crowdfunding campaign on Startnext ranges around €8,000. “A successful project depends on several key factors such as the individual idea, presentation, and communication,” notes Anna Theil, Head of Communications at Startnext. The campaign video is the central focus on the biggest German-speaking crowdfunding platform, mainly used by artists, creatives and startup-founders. “It’s all about introducing yourself and your idea in an authentic way, to win over supporters on the internet.”

Community members need to be inspired to participate in a crowdfunding project. In general, just one of every 100 visitors gives money to support a campaign. 1,000 visits equates to an average of around €1,000. A motivating objective that unites your immediate community is good, but what is really central to a successful campaign is targeting a wider audience.

So what did the Adler do differently than the Falcons in order to achieve success? The Adler were able to convince other Berlin athletes and top sports teams from the German capital to mention their crowdfunding campaign on their respective social media channels to gain a wider reach. Hertha BSC (soccer), Alba Berlin (basketball), and Eisbären Berlin (ice hockey) were all encouraged to participate and were integral in the success of the campaign.

Never underestimate the power of mass media. If you can be seen on television, in daily newspapers, and on radio stations, your project can attract the attention of tens of thousands of recipients, if not more. Your campaign won’t be limited to just the few hundreds in your inner circle.

Berlin-born NFL linebacker Björn Werner of the Indianapolis Colts also supported the Adler – his former club – from thousands of miles away. He shared the crowdfunding project on his Facebook page, donated signed Colts jerseys to supporters, and donated money. “I’m just one out of many that were involved,” said Werner. “It was more important that the whole football community stood together to save the Adler.”

Fairplaid – a blending of the words fairplay and aid – is a German crowdfunding site which specializes in sports projects. Marthe-Victoria Lorenz, founder of Fairplaid, believes in the undeniable advantages of crowdfunding for amateur sports. “We want to provide an opportunity to athletes and teams that otherwise wouldn’t have access to sponsors or that have no time for enduring the bureaucracy of government funding. Truly everyone can create a Fairplaid project and succeed with it.” On her blog, Lorenz also offers out useful advice such as “What sports teams can (and should) learn from startups.”

Before you start your own campaign, be sure to choose the right platform for your specific needs.

Contrary to many other crowdfunding platforms, fairplaid.org is commission-free service. Teams and athletes don’t always need to pay extra to benefit from such platforms. “Otherwise, there would be minimal value to them. Users could simply display their bank information on their own websites,” says Lorenz.

In general most websites charge you a 5-7% commission on the final donation amount. Fairplaid is currently being financed by the BW Bank in Baden-Württemberg. As the result of various incentive programs, additional money is going to fund Fairplaid as well.

The biggest advantage of crowdfunding is that you have nothing to lose, and the same goes for your supporters. In the case that the targeted amount isn’t reached, every donor will automatically get his or her money back. The team or athlete will have access to the funds only if the campaign is success. Of course, you can always collect more money than initially targeted.

Another recent example of a successful crowdfunding campaign is that of the Berlin Thunderbirds, one of Berlin’s smaller teams. The Thunderbirds brought in over €8,000 for a new set of field goals and chalk to line their field. Other sports teams have also used crowdfunding to finance bus rides for away games or to afford livestreaming equipment. There are many projects for which you can pursue funding, given the right plan.

Though there’s always a chance for failure with such a campaign, he who doesn’t try has already lost. Fortunately, the Adler community stood completely behind the club’s crowdfunding campaign. “We have nothing to lose, so we’ll fight our asses off!”, was the motto. In the end, almost 400 people supported the Adler campaign through donations. The Adler proved that with a lot of motivation and a solid plan, any team can run a successful crowdfunding campaign to help them achieve their goals.

How about you and your team? Have you already ran a crowdfunding campaign? What were you aiming for? Tell us about your experiences in the comments below, so that others can benefit from it.

Björn Hesse is a guest contributor from Berlin, Germany. Having been a Frankfurt Galaxy fan since childhood, he played linebacker for the Leipzig Lions in Germany’s third league (Regionalliga-Ost) from 2003 to 2008. He worked as a PR intern for the Galaxy during the 2006 season when the team won its fourth and final World Bowl title in Düsseldorf against the Amsterdam Admirals. Since 2014, Björn has worked for the Berlin Adler – the 2014 Euro Bowl champions – in PR and Social Media Marketing. He currently writes about the Berlin Adler and the Indianapolis Colts for the German magazine HUDDLE and www.football-aktuell.de. You can reach him via his Twitter handle @bjoernhesse.