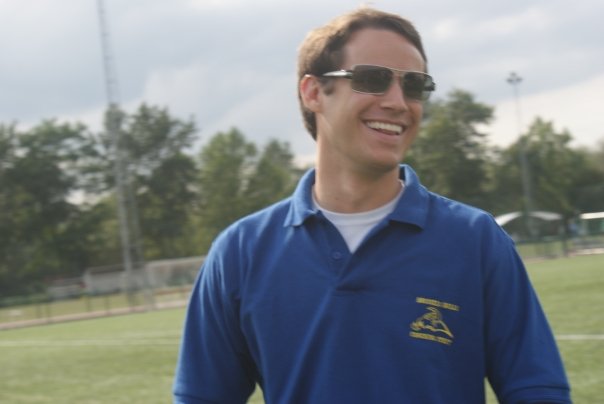 The genesis of The Growth of a Game really started during my first season as an import player in Europe in 2008. I played for a team called the Brussels Bulls, an upstart team in the Belgian Football League. The Bulls were coming off of a winless first season in 2007 and failed to make it through a full schedule before forfeiting their campaign, so they desperately needed someone to stabilize their roster. We didn’t fare much better that following year – my first season with the team – winning just one game, but we made it through the season and started showing some promise toward the end of the year. In the team’s 3rd season, my 2nd, we finished 5-6 and only 9 seconds away from a playoff berth. I left the team after the 2010 season, but by 2011 the Bulls had reached the playoffs for the first time and played in their first national championship game in 2013. The foundation we laid during those early years led to the development of some of the best players in Belgium. This experience struck a passion for me – seeing the development of the sport outside of my home country firsthand.

While I was in Brussels, I began connecting with many teams across Europe. I coached several camps, consulted with upstart teams and leagues, and quite simply soaked up as much as I could about how the sport was developing in each country. It was so fascinating for me to see the different paces at which the sport was growing in various places, not to mention each country’s take on how to develop the sport. When it was time to leave Europe in 2010, I always knew that I’d be back to pursue the growth of the sport here – perhaps a little older, a little wiser, and with some fresh ideas to share with the American football community.

After returning to California I began working for Sports 1 Marketing, a sports marketing firm owned by Warren Moon, the Hall of Fame quarterback. I served as Vice President of Business Development and we worked closely with the NFL, MLB, St. Jude Children’s Hospital, the Crescent Moon Foundation, several Fortune 500 companies, and many more. But perhaps the most valuable lessons I learned were from Warren himself. Warren was the first African-American quarterback inducted into the Pro Football Hall of Fame, but the road to getting there didn’t come easy. Everywhere he went, he faced doubters who said a black man couldn’t play quarterback in the National Football League. He overcame all of that doubt and all of the hate to become one of the best football players that’s ever lived. Most remarkably, he did it all while carrying himself with such grace and self-respect. He’s an impressive man, and it’s because of him that the door opened for guys like Cam Newton, Russell Wilson, Jameis Winston, Teddy Bridgewater, and more.

I worked for Warren until 2013 when I started my own sports consulting firm (Premier Class Consulting), returning to Brussels to pursue my passion. It was not long after this in 2014 when I came up with the premise for the book– a chronicle of the growth of American football in Europe. The history of the sport fascinated me, but I was always far more interested in the current state and the future of American football in Europe. I chose to place a strong emphasis on these latter two subjects, something that I think will resonate with most of you.

Writing a book is a tremendous task, let alone one as ambitious as this. I’ll discuss this process at further length in the preface of the book, but for now it’ll suffice to say that conducting research for this project is not a linear process. It’s taken the support of many people to get this far and I quite simply couldn’t have done it without them. Since this project was so time consuming and would ultimately require a multi-year commitment on my time (not to mention the time of several others), I wanted to ensure that we had an audience to share the book with upon its release. This is where the premise of The Growth of a Game website came in.

I wanted to create a community of American football advocates and a platform from which to create further public awareness and drive interest to the sport. I spent 6 months working with web developers to design the interface of the website so that it would be engaging, yet simplistic. Throughout this process I wrote several articles in preparation for the launch of the website so that there would be enough content to keep people engaged. The goal for the website, quite simply, was to provide the resources necessary to help people succeed at whatever their ambitions were. I’ve built some expertise in this field and I had a duty to give back to the community that sparked my passion.

We launched the website on November 1st, 2014 and the response was overwhelming. Messages began pouring in from people who were enthusiastic about the project. We started seeing our articles shared all over the internet, teams began using our content for their sponsorship and recruiting campaigns, and more people began contributing to the site as writers, translators, editors, and more. Some of them weren’t even American football fans before they got started, and now they’re invested in our mission to help bring the sport to a larger audience. The support we’ve received from you has been so encouraging and it’s given us further motivation to strive for more.

We now have over 30 contributors for the website from all over the world and we translate articles into 10 different languages. Several of our articles have been viewed over 20,000 times. We’ve reached a passionate audience that has been craving something like this for a long time, and we’re not stopping there. We have many more features that we’ll be bringing to you over the next year, and we have a long-term growth strategy to help maximize the passion that exists for the sport here in Europe. Every day we’re working hard to reward those who have put their heart and soul into this fantastic sport. The only thing that’s been missing until now is the right vision, and we hope you’ll join us as we push the limits of what is possible. With your help, we can shift the dynamic of American football in Europe and show people how this sport can change the lives of so many people for the better.

Thank you to everyone for your incredible support and encouragement through this growth process. It’s because of you that this project thrives and we promise to keep bringing you more.

Keep up the great work and let’s keep pushing forward.