Wembley Stadium during the NFL International Series on October 2, 2016

Dating back to the 2007 season, the National Football League has been playing at least one regular season game abroad each year. Beginning as an annual event, the NFL International Series expanded to multiple contests in 2013 and now features four regular season games every year.

While the first 15 games were held exclusively at Wembley Stadium in London, two additional venues were introduced to the series during the 2016 season. The New York Giants defeated the Los Angeles Rams at London’s Twickenham Stadium, 17-10, and the series’ finale will be held at Estadio Azteca in Mexico City, featuring the Houston Texans and the Oakland Raiders in the NFL’s first regular season game in Mexico since 2005.

As evidenced by its immense investment in the International Series, the NFL is dedicated to growing its brand around the world. As the American football fan base reaches saturation in the U.S., it has become an increasingly appealing business case for the NFL to expand its following overseas and into other parts of North America.

With that in mind, I was fortunate enough to cover the first of the four 2016 International Series games pitting the Indianapolis Colts against the Jacksonville Jaguars on October 2nd at Wembley. In my time in London, I witnessed a variety of activities, actions, and testimonials that all aligned with one common goal: to grow the NFL brand in Europe.

This article will focus on the highlights from my behind-the-scenes perspective at the NFL International Series in London.

The Friday before the matchup afforded credentialed media the opportunity to attend press conferences and practices for both teams. In a Colts’ press conference filled with cliché questions pertaining to players’ jet lag and the importance of the divisional matchup, one reporter certainly stood out.

In the middle of quarterback Andrew Luck’s time at the podium, one German news crew delivered a warm serving of schnitzel and fries to the Indianapolis quarterback. That’s certainly not something you see every day. The gesture was in reference to the time Luck spent growing up in Frankfurt, as well as London.

When Andrew Luck talks to the media in Europe…

On the Saturday before the game, hundreds of thousands of fans flocked to Regent Street in downtown London to take in player appearances, cheerleader performances, and musical acts. Most of the attendees wore jerseys from all 32 NFL franchises, however a significant amount of Colts and Jaguars apparel was visible in the sea of football enthusiasts.

Perhaps the most noteworthy speech during the festivities came from the owner of the Colts, Jim Irsay. The Irsay family has owned the franchise since 1973 and orchestrated the iconic move from Baltimore to Indianapolis in 1984. Prior to the players taking the stage, Irsay addressed the audience and spoke of the NFL’s future in England.

“My goal, as an owner, is to find the right team and the right owner to have a permanent franchise here in London,” said Irsay. “I want the NFL and London to be together for the remainder of the century.”

These strong words were well-received from the crowd that gathered from all over Europe to attend the celebration. Following Irsay’s thrilling speech, a group of Colts players followed suit and shared some words with the crowd. With stars like Luck, future Hall of Fame kicker Adam Vinatieri, and charismatic punter Pat McAfee taking the microphone, the fans were certainly enthralled.

Among the highlights of the player’s presentations was an address by tight end Dwayne Allen. Allen and Luck both spent time in London this summer promoting the International Series and hosting players. Allen’s passion for growing American football was apparent in his words.

“You get to see men of all shapes and sizes out there competing [in American football] and that’s why we have to spread this sport all over the globe,” Allen exclaimed.

NFL Commissioner Roger Goodell also took the stage, and yet again, the topic of an NFL franchise in London was at the forefront of the conversation. Goodell continued the positive sentiment for growing the game in England.

Will we ever see a 🇬🇧 @NFL franchise?

Overall, the Regent Street event was one that fans will never forget. To go along with the performances and appearances, the NFL had various exhibitions, interactive games, and contests for participants to engage in. Over 600,000 fans attended the event in preparation for game the following day.

Upon arriving at Wembley Stadium on Sunday morning I was again greeted by the copious amounts of jerseys, both old and new, from all 32 NFL teams. The number of people that were exploring the Tailgate Party, more than three hours before kick-off, was astonishing. Never before had I seen such an impressive volume of fans to arrive at a stadium so early. 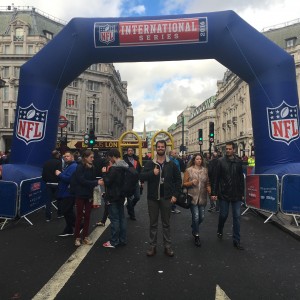 D.J. Podgorny at the NFL on Regent Street in Downtown London

Yet again, the NFL invested heavily in the pre-game experience, hosting the appearances of NFL Hall of Famers, musical performances, as well as interactive and historical NFL exhibits. Food and plenty of merchandise were also available for purchase. On the whole, fans seemed captivated by the league’s extravagant efforts.

The most noticeable feature of Wembley, when entering, is its sheer size. With a capacity of more than 84,000 for an American football game, it is larger than almost every stadium in the U.S. Its structure, with the iconic arch extended over the pitch, is unlike any other in the NFL.

As fans piled in, a segment highlighting former New York Giants defensive end Osi Umenyiora’s involvement with growing football in the UK was played over the jumbotron. The two-time Super Bowl champion and London native was a key part of developing the UK’s Henry Innis and France’s Anthony Dablé, both of whom earned tryouts with the New York Giants earlier this year. While Dablé impressed scouts enough to earn a training camp contract, he was unsuccessful in making the final roster for the Giants.

Regardless, the efforts of Umenyiora and other advocates for American football in Europe have not gone unnoticed by the NFL. Now, more than ever, colleges and the pros alike are looking to European leagues for undiscovered talent. In addition to the Giants auditioning Dablé and Innis, Germany’s Moritz Boehringer became the first player to be drafted directly from a European league when he was picked in the 6th round of the 2016 NFL Draft by the Minnesota Vikings.

As kickoff approached, the pre-game atmosphere transformed into one of the most electric that I have ever witnessed. Fans arrived early to fully absorb the spectacle of American football from warm-ups through the final whistle. With Robin Thicke performing two of his greatest hits just before player introductions, Wembley certainly felt like the host of an NFL playoff contest.

As the crowd erupted after a performance of God Save the Queen that I will personally never forget, the Jaguars were set to kick off. The Jaguars’ commitment to building a following overseas seemed to pay off as a majority of attendees raised their black flags in their support. London is most definitely the Jags’ second home and the environment reflected that.

Despite an impressive fourth quarter resurgence by the Colts, the Jaguars were able to hold on for the win. Altogether, virtually no fans left the stadium early, even when the game seemed to be decided. Their desire to take in every last second of their NFL experience was very clear.

Following the game, a short press conference was held for both teams prior to their departure back to the U.S. For the Colts, the defeat seemed to be especially hard as they prepared to board a somber 8-hour flight back to the Midwest. The Jaguars’ attitude, on the other hand, was amplified by their victory in front of their British faithful, holding their heads high as they boarded the bus to Heathrow Airport.

On the whole, the matchup in Wembley Stadium was unlike any other football game that I have ever encountered. From the logistics of coordinating the long road trip for both teams to the celebration on Regent St. to the gameday experience, I was blown away by the execution of such a momentous event. I was thoroughly impressed by the visible satisfaction on the faces of the fans throughout the entire weekend. Game 15 of the NFL International Series was a resounding success. 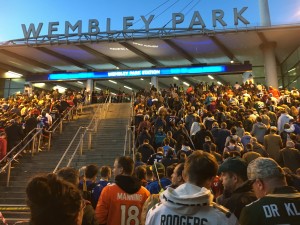 The most encouraging takeaway from the three days I spent immersed in American football in London was the overwhelming support for this great game. The streets of London were filled with jerseys, hats, and shirts donning the logos of every NFL team all weekend long. Team owners, players, and even the NFL commissioner advocated for future growth of football in Europe. It is clear that growing the NFL’s presence in Europe is top of mind for league executives.

It would seem that Europe is the optimal target audience for these growth efforts. Only time will tell if an NFL franchise is relocated or created in London, but conventional wisdom would lead us to believe it is almost a certainty as this point.

On top of that, talent only continues to develop in European leagues. With over 1,500 senior teams in 41 European countries, American football is bigger than ever in Europe. And with the success of various European players at both the collegiate and professional level, U.S. scouts are starting to seriously view Europe as a feeder for top talent.

My weekend in London was extremely informative and eye-opening in regards to the future of American football around the globe. With powerful advocates, emerging talent, and a passionate fan base, it is apparent that football is on a positive growth trajectory and will only continue to expand throughout Europe. The future is certainly bright for all stakeholders of American football in Europe.

D.J. Podgorny is a junior contributor and account executive for The Growth of a Game and Premier Class Consulting. He is based in San Jose, California. Originally from the Chicago suburbs, D.J. graduated with a Bachelor’s Degree in Mechanical Engineering from the University of Illinois with a minor in Business. He has been involved in the game of football as a fan, player, manager, coach and, most recently, a journalist.