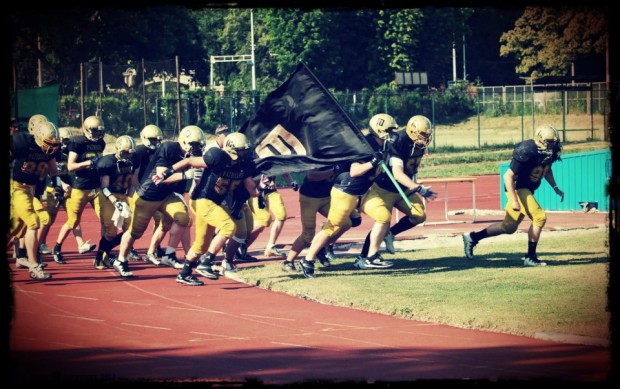 The Zagreb Patriots of Croatia take the field.

Translations of this article are also available in the following languages:

It would be an understatement to say that the rest of Europe owes much of its cultural and historical traditions to the Balkans.

In the 3rd Century A.C.E., long before the Enlightenment, the Renaissance, or the Reformation, the Roman Empire was teetering on the verge of collapse. In the midst of this tumultuous time, the earth certainly did not shake when a young boy named Dioclese was born in the remote and impoverished Roman province of Dalmatia – an area that roughly covered modern-day Croatia. However, that boy – who died with the name Emperor Diocletian just over 60 years later – would dramatically change the course of European history.

Dioclese joined the Roman army and quickly proved himself to be a capable leader. When Emperor Carus died, the generals proclaimed Dioclese emperor, which made him only the second non-Roman to hold the title. Emperor Diocletian lived up to the confidence that was placed in him to save the Empire. He did so by making peace with the Persian Empire, the most powerful enemy of Rome, and by splitting the empire into East and West. Diocletian’s work saved the Roman Empire from imminent collapse and allowed it to live on for hundreds of years.

The capstone on this man’s incredible legacy is that Diocletian became the first and only Roman Emperor to willingly abdicate his power in favor of a chosen successor. After doing so, Diocletian lived out the remainder of his life in his palace along the Dalmatian coast – a palace which can still be visited today in Split, Croatia. The Split Sea Wolves – one of seven American football clubs in Croatia – train just down the road from the palace’s remains.

Not surprisingly, much of the same forms of adversity facing the rest of the Balkans are present in Croatia. The teams struggle with purchasing player and field equipment, finding consistent access to quality fields, acquiring government support, and with traveling to play games against teams outside of Croatia, as they are not currently part of the Schengen Area. 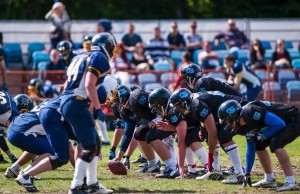 The Zagreb Thunder facing off against the Osijek Cannons in Croatia (Photo courtesy of Tibor God).

As it is in Bosnia and Slovenia, sports funding from the Croatian government hinges upon the way that the sport is classified within the country. Marko Brkljačić, the president of the Zagreb Thunder, described how “a sport must be a member of the Croatian National Olympic Committee” in order to be qualified for government funding in Croatia. The good news is that American football, despite not being an Olympic sport, was admitted to the Committee in 2014.

This is a much-needed breakthrough that took the Croatian American Football Association the better part of five years to accomplish. The hard work of the Association has resulted in an increase in government support for the development of the game. The funding is obviously not exorbitant, but during a time like this when every step of progress is hard-earned, every bit helps.

It is actually remarkable how far the game has come in Croatia given all of this adversity, and given how new the game is in the country. The first Croatian team to appear was the Zagreb Thunder, officially founded in 2006. For 2 years, the Thunder played only “friendly” games since there were no other Croatian teams to compete against. Only in 2010 were there enough Croatian teams (four) to found the Croatian National League and have a Croatian National Championship tournament. 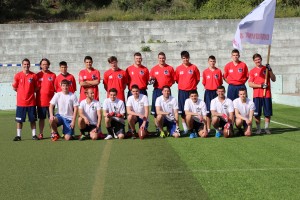 Now, there are currently 4 tackle teams and 3 flag teams in Croatia. The tackle teams are the Bjelovar Greenhorns, Osijek Cannons, Split Sea Wolves and the Zagreb Patriots. All of these teams play exclusively in the newly established Croatian Football League, with the exception of the Patriots who also compete in the CEFL-Central. The flag teams are the Dubrovnik Sharks, Zagreb Thunder, and the Zaprešić Saints. These clubs all have plans to start tackle teams once their circumstances permit.

In addition to facilitating the establishment and development of teams, the Croatian Association has also begun to sponsor player development. Also, by turning outward and bringing non-Croatian coaches and players into the fold, the Croatian Association is integrating with the broader European network of American football advocates which in turn is creating opportunity in addition to well-earned credibility.

When asked how the general Croatian population has reacted to the introduction of American football into their country, Mr. Miletić had a very balanced outlook. “People were very skeptical in the beginning, like it was not going to last. However, once they got to know us and the club, they started to recognize how much we give of ourselves and how much of our free time we contribute to American football. They began to see that the sport is here to stay.”

“Every time someone joins the club, they say how amazed they are by the experience,” Mr. Miletić continued. “The parents are amazed that we don’t get paid and that we still work so hard. They are happy to have their children learn from such an environment. We do it all for the love of the game, and this brings people in. It brings success.”

Surely with such leadership by the Association and with such optimism from so many of the club’s presidents, the future of American football in Croatia is bright.

We are grateful for the time, effort and energy of the following individuals who were invaluable in the publication of this article:

This article is part of an ongoing series on the state of American football in the Balkans. To view Part 1, please click here. To view the next article in the series, click here.