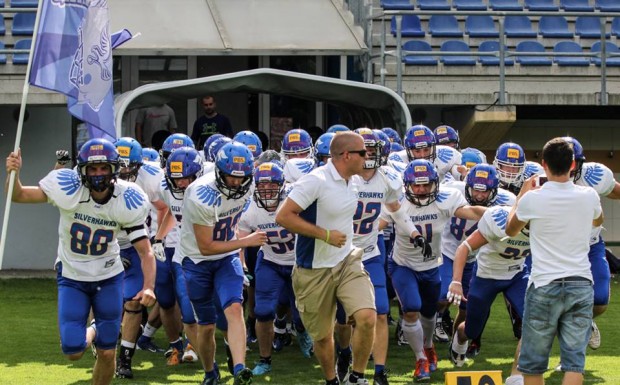 Slovenia is a country of crossroads. Geographically speaking, four major European formations – the Alps Mountains, the Dinarides Mountains, the Pannonian Plain, and the Adriatic Sea – all intersect within this tiny country. From a linguistic standpoint, Slovenia has 3 official languages: Slovene, Italian, and Hungarian. However, English, Spanish, German, French, Serbian, Croatian, Bosnian, Montenegrin, Albanian, Macedonian, and Czech are also commonly spoken. It should come as no surprise then, that Slovenia ranks #1 in Europe for “knowledge of foreign languages”, with 92% of the population speaking at least one “foreign” language and 72% of the population speaking at least 2 “foreign” languages. With such cultural diversity, it is fitting that American football also exists at the center of these crossroads.

Within the Slovene American Football Federation there are eight teams divided into two divisions, with 4 teams playing within each division. The Domžale Tigers, Kranj Alp Devils, Ljubljana Silverhawks, and Maribor Generals all play in the top division, while the Gold Diggers, Murska Sobota Storks, Ljubljana Silverhawks Seconds, and Slovenska Bistrica Werewolves call the lower division home.

Despite having a relatively strong domestic presence with nine teams, Slovenian clubs are routinely competing against teams from Austria, Croatia, Bosnia, Serbia, and Hungary during the course of a regular campaign. This frequent completion against foreign teams indicates that Slovenia has one of the most internationally integrated and complex structures for its American football teams. 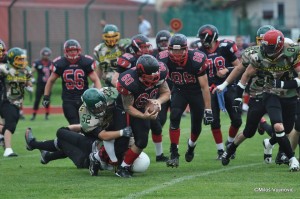 For instance, the Domžale Tigers and the Kranj Alp Devils play in the Central Division of the Central European Football League (CEFL-Central). Joining this Slovenian contingent of the CEFL-Central are the Zagreb Patriots from Croatia and the Sarajevo Spartans from Bosnia and Herzegovina. The Ljubljana Silverhawks compete within the CEFL-West Division along with the Graz Giants and Hohenems Blue Devils from Austria,, as well as in the top division of the Austrian Football League (AFL). The Maribor Generals only compete in the second division in Austria and do not play any Slovenian teams, except when they play in the Slovenian National Championship tournament. This makes Slovenia a true crossroads for American football, to say the least.

The matter gets even more complicated within the Eastern Division of the CEFL (CEFL-East). The CEFL-East is comprised of the Budapest Cowbells from Hungary, as well as 4 Serbian teams – Beograd Vukovi, Novi Sad Dukes, Inđija Indians, and the Niš Imperatori. Each of these Serbian teams also compete in the Priva Liga (top division) within Serbia while the Cowbells also play in the Hungarian Football League, the top division in Hungary.

The champions of the CEFL-East and the CEFL-Central meet in a “wild card” playoff game. The winner of that game plays for the CEFL Championship against the winner of the CEFL-West. In 2016, this championship game took place between the Graz Giants and Beograd Vukovi, with the Giants narrowly winning.

Such a dynamic may seem needlessly complex and convoluted however, its necessity becomes obvious once the dynamics of American football in Slovenia are understood.

First of all, there is a huge disparity in the level of play amongst Slovenian teams. Teams like the Silverhawks are capable of competing against some of the best teams in Europe via the AFL, while teams like the Koper Pirates, the only Slovenian team not in the Slovenian Federation, barely have enough players to field a team. On that note, the fact that the lower division Slovenian teams play with 9 players per side reflects a need for players, not a strategic choice. Moreover, many clubs are fairly new. Only one club in the country – the Silverhawks – existed prior to 2008, and only three teams were founded before 2012. These disparities make it impractical for Slovenian teams to compete amongst themselves within a single 8-team league.

However, despite these disparities, there are still some remarkable developments in American football taking place in Slovenia and the game is certainly heading in the right direction. 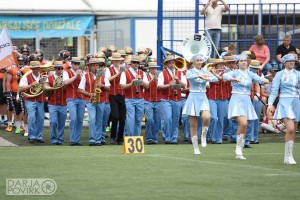 Under the leadership of team president Jernej Pavlič, the Tigers have taken a different approach to recruiting than most European clubs. The Tigers began their organization with their youth and flag teams as a means to establish a solid foundation for skills development, as well as a sustainable platform through which anyone interested in the game could progress. The Tigers started with Slovenia’s youth, and they prioritized every side of their club ahead of the men’s senior tackle team.

“With the Tigers, we started with kids aged 13, 14, and 15,” explains Mr. Pavlič. “Then we targeted 11 and 12 year olds. We delayed the creation of our senior tackle team, which was the last to join our program. Usually in Europe teams start the other way around, and the adult tackle team consumes all the organization’s resources, coaches, time, etc. It’s a huge cost. We started from the bottom up, and it quickly led to the biggest program in Slovenia.”

In just three years, the Tigers program has surpassed even the Silverhawks, Slovenia’s oldest club (founded in 2001), in terms of membership. This is pretty compelling proof for Mr. Pavlič’s approach to the successful development of American football programs.

When asked how the Slovenian Federation promotes the sport through schools, he explained his process. “Usually we go into elementary schools, high schools, even colleges, and we promote the game of football. Especially flag football. Flag football is the best level for new players to begin with, because there are less associated costs, fewer players required, and it’s a great gateway to tackle football.” This is an approach comparable to that of the Utrecht Dominators (Netherlands) that has yielded similar success.

“We are getting good results with this approach,” Mr. Pavlič continued. “For example, we recently presented the sport in schools in two towns and eventually there were 25 guys who started playing from those 2 towns. It’s definitely a slow process, but our approach is clearly creating successful results.”

The situation in Slovenia is not all fairytales, however. The Slovenian Federation and its teams face the same types of adversity as everyone else in Europe who is striving to grow American football. Like in Bosnia, Slovenian teams are precluded from substantial government support because of the way the Slovenian government classifies sports.

In Slovenia, the Ministry of Education, Science, and Sport divides the country’s sports into two primary categories: Olympic sports, which occupy the top category, and non-Olympic sports, which are divided into 3 sub-categories below. When a sport ascends from one category to the next, teams of that sport qualify for increased government benefits and support. American football is currently categorized in the second tier of the non-Olympic sub-category – outside of the top sub-category.

However, just like the Bosnians, the Slovenian Federation is working hard to rise in its respective sports categorization in order to access greater government funding and support. The federation has just applied to be admitted into the top sport sub-category and should hear back later this year.

While optimism certainly permeates the entire community of American football advocates, in Slovenia this optimism stands out. When considering that the sport is still at such a disadvantage compared to soccer and rugby, this is pleasantly surprising.

Robert Fišer, founder and quarterback of the Maribor Generals, confirms the passion felt by most Slovenes. “What I always say is different about American football from every other sport is that you have guys from all backgrounds and all body types. When our players come to practice, we become a family. When we stop playing, we stay friends. American football is more than a sport to us.”

Nejc Lebar, head coach of the Kranj Alp Devils, echoed this sentiment. “I’ll continue playing as long as I can, and when I can’t play anymore, I’ll stay on as a coach. In Slovenia, American football invites you into a whole different family, a second family.”

With such optimism being led by a clear and results-oriented strategy, there is no doubt that the innovative and grass roots approach taken by the Slovenian Federation and its teams will continue to foster a long-term and sustainable growth of the game.