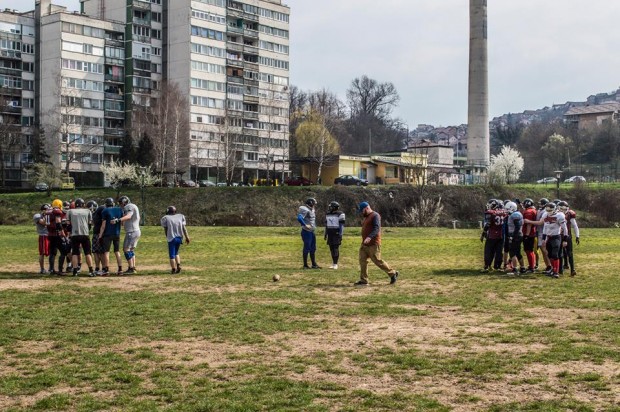 The Sarajevo Spartans from Bosnia and Herzegovina during a practice session.

The widespread presence of American football in Europe is becoming more and more common knowledge among people around the continent. In countries like Germany, Austria, France, Sweden, and Finland, among others, the game has become relatively advanced. The German Football League and the Austrian Football League have even been gaining global attention, especially with the historic drafting of Moritz Böhringer in the 5th round of the 2016 NFL Draft. Teams like the Swarco Raiders, Carlstad Crusaders, Vienna Vikings, New Yorker Lions, and so many others are starting to become household names.

The progress that the game has made across Europe is undeniable. However, taking a step back from the highest echelon of play in Europe, it becomes clear that the game is still in its developmental stage. Of Europe’s 50 countries, 10 still do not have American football teams. These 10 countries are Albania, Andorra, Greece, Kosovo, Liechtenstein, Macedonia, Monaco, Montenegro, San Marino and Vatican City.

Half of these countries are in the Balkans – the region that is currently facing perhaps more adversity than any other part of Europe, with the possible exception of Ukraine and Turkey, but which, interestingly enough, is where the roots of all European culture can be traced. Whether it be democracy, international trade, naval technology, art, religion, global conquest, history, poetry, or theater, the entirety of the European story began in the Balkans. It is ironic then that the Balkan Nations represent the last true frontier in the spread of American football across Europe. However, over the last decade numerous Balkan countries have showed a strong affinity for the sport of American football.

The Growth of a Game has compiled the most comprehensive body of research in existence concerning American football in the Balkans. Quite simply, we are extremely impressed with the way that the game has been progressing and taking hold in the region.

There is perhaps no example more quintessential than Bosnia and Herzegovina. The current state of the game in Bosnia represents the beginnings that every country faced at one point during the course of their respective development.

In Bosnia, there is currently one club, the Sarajevo Spartans. The club originally began on July 10, 2011 as the Sarajevo Tigers. One year later, in 2012, the club rebranded itself under its current name.

Tony Gotovac, who plays wide receiver, running back, quarterback, and cornerback, has been with the club since its inception. In the beginning, the club started out as just three friends. “There was one football, three guys, and a little bit of grass. That’s it.” These guys went to three different high schools in Sarajevo to seek recruits. One of the classrooms that they walked into was Tony’s, and he’s been hooked ever since. 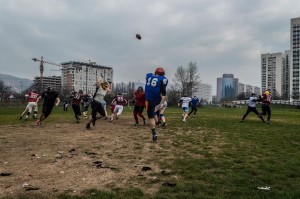 At first, they didn’t even have a full set of player equipment. During that first year’s games, when the offense would come off the field, they gave their pads and helmets to the defense and vice versa. Moreover, they could not host home games since there was no field for them to use. The club had no office, no gym, and no field. What they did have, however, was an abundance of heart and a true love of the game.

Now, the situation is quite different. The team competes in the Central Division of the Central European Football League (CEFL-Central) and all 46 current members of the Spartans’ roster have equipment. They host home games at the Olympic Stadium of Sarajevo and they have a designated club space at their facility. The team also competes with an American coach and an American quarterback. They even have plans to construct a gym for the members of the team.

Much of this progress can be attributed to the tenacity, dedication and vision of Eldar Balta, the team president. A true Renaissance Man, Mr. Balta not only runs the club, but he also is a medical student, owns and operates an NGO, owns and operates a landscaping business, and participates in the development of one of the most well-known jazz festivals in Europe.

His vision for American football in Bosnia, and for his Spartans, is epitomized in a quote that emphasizes the team’s philosophy. “We are building a club. This is different than building a team. A team is just a team. A club is a community, a location, an identity, a family.”

“Football creates an avenue for young men at risk of joining gangs to join a much healthier type of organization. Our club has more important goals than simply winning football games – and one of those goals is to give young people something that they can enjoy and from which they can learn discipline and teamwork.” 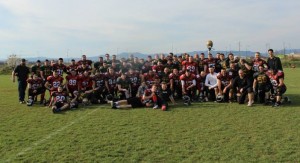 Make no mistake, however. The Spartans still face a tremendous amount of adversity, even under such fantastic leadership. The team still does not have any field equipment and it struggles with finding sponsorship. The club also does not have reliable and consistent access to fields for practices.

Additionally, the club faces extra adversity due to Bosnia’s current political status as a country that is not in the European Union or the Schengen Area. Every time they travel, they have to deal with borders, currency conversions, and all other types of inconveniences and difficulties that most teams in Europe never have to face.

The club has also struggled with their goal of forming a federation, which in Bosnia, requires at least 3 clubs. Despite efforts to facilitate the formation of additional teams in Bosnia, the Spartans are still the only club in existence. This is an important issue because without a federation, a club’s status is stuck at the “amateur” level. Being stuck at the “amateur” level in Bosnia carries real implications. As an amateur club, the Spartans do not qualify for rights enjoyed by members of federations – rights which would allow them access to better fields as well as government funding. With a federation, a national team could also exist, something that the Spartans long for.

It’s impossible to feel anything other than admiration and respect for all those involved in the development of American football in Bosnia. Their struggles represent the struggles that every team faced in the early stages of its development, and they will undoubtedly reap the same rewards as other teams. With such quality leadership, dedication and passion fueling the Spartans, the realization of their larger goals – the establishment of a Bosnian federation and the true advancement of the state of the game in Bosnia – are not issues of “if” but “when.”

There is no better way to define the spirit of the club and share the story of American football in Bosnia than Tony’s inspiring words. “It’s hard, but you have to love the sport enough to fight through that period where you can’t even play games because you don’t have enough players. You have to believe and keep moving until something comes along. And something will come along.”

I’d like to give my profound thanks to both Eldar Balta and Tony Gotovac for sharing their stories with me and for opening my eyes to the story of American football in Bosnia. May they be an inspiration for all those people sharing the same passions, struggles, and successes.