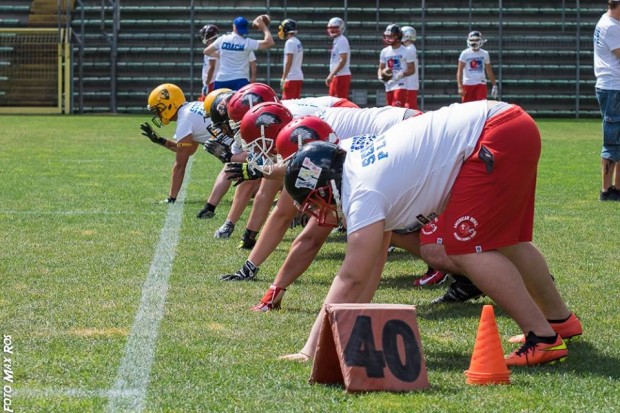 On July 16th, a live scrimmage between offense and defense wrapped up the American Bowl International Camp. For three days, players and coaches from all around Italy gathered in Trieste to learn from NFL legends Steve Bono (XXIV Super Bowl Champion and 1995 AFC Player of the Year), Emery Moorehead (XX Super Bowl Champion), Kris Haines (former Redskins, Bears, and Bills receiver), Ken Lanier (13 seasons with the Denver Broncos), John Holecek (former Bills, Chargers, and Falcons linebacker), and Shaun Gayle (XX Super Bowl Champion). The coaching staff was completed by experienced coaches Sebastian Serrano and Aitor Trabado (Spain), Ken Hale and Kevin Gardner (USA), and it was led by Giorgio Longhi (Italy). 40 Senior players, 20 Under 19 players and 20 observer coaches went through two-a-days, learning as much as they could from the coaches, who were eager to share their knowledge. Coaches and players also had the chance to visit the beautiful cities of Trieste and Muggia, located in the Friuli Venezia Giulia region. This was the seventh edition of the Camp, which is growing every year, and it’s becoming one of the top camps in Europe.