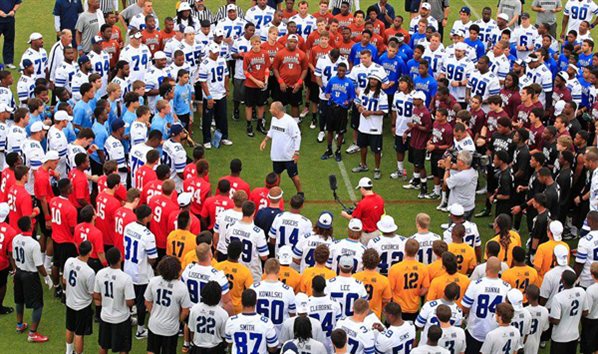 With the objective of facilitating the development of American football in Europe, The Growth of a Game has established a developmental camp system that will commence in 2016.

As one of the many long-standing plans we’ve had since The Growth of a Game first launched, our camp system is aimed at long-term skill development for both players and coaches. We’ve partnered with new and pre-existing camps across Europe to provide logistical support and access to some of the best coaching the sport has to offer.

For the first time ever, we’ve created a page that has consolidated the major camps of Europe into one place. Details for the camps – including coaching rosters, pricing, accommodation, and more – can be found on our Camps page.

All of our camps will occur on an annual basis, so they will be held every year in approximately the same location and at the same time of year. We believe that this continuity is vital to long-term skill development so that players and coaches are constantly learning new drills, techniques, and philosophies. This also allows for players and coaches to plan in advance and make any necessary travel arrangements.

Our camps are staffed by the highest caliber of coaches, not only throughout Europe but around the world. We work with coaches that are not only highly talented and innovative, but also have a passion for expanding the game of American football. These are coaches that align with the overarching philosophy that we have at The Growth of a Game: to facilitate the development of American football throughout Europe.

In addition to the camps already listed, we’re currently developing camps in Italy, Portugal, Romania, Denmark, Czech Republic, Poland, and Sweden. Once the details of these camps have been finalized, they will be added to our Camps page roster. New camps will be added often, so check back regularly.

We’re continuously seeking to expand our roster of camps so that more players and coaches have access to the very best training available. We’re seeking motivated individuals who aspire to partner with The Growth of a Game on their own developmental camps, and therefore aim to improve and expand the game of American football in Europe. If you’re interested in partnering with us on a future camp, please contact us to discuss this in further detail.

To view our full roster of upcoming camps, click here.

Thanks for being a part of The Growth of a Game. We hope to see you at our next camp!