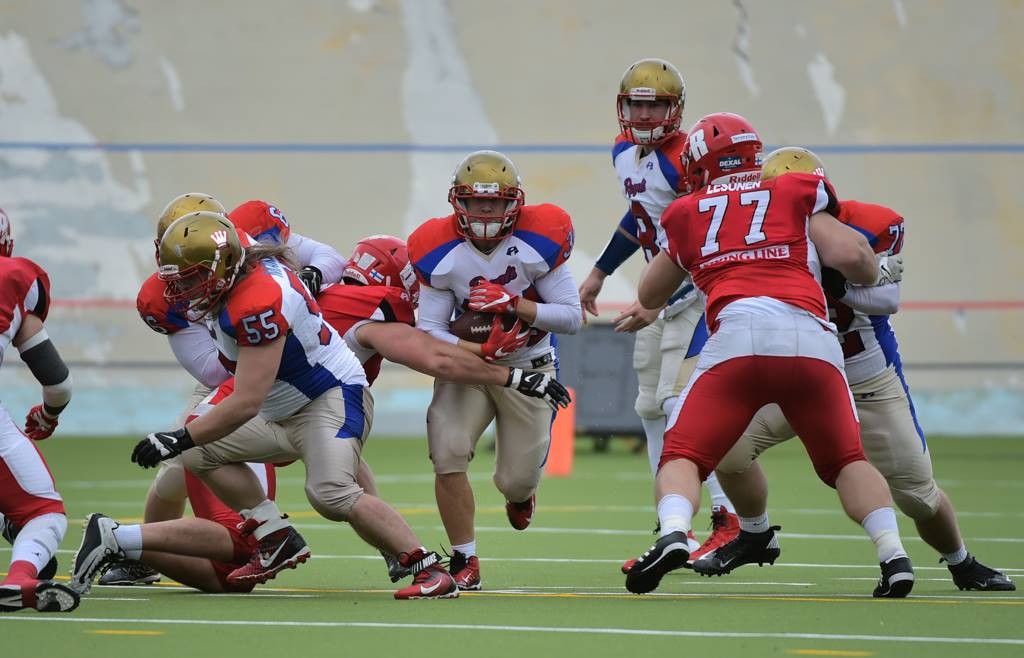 When it comes to American football in Scandinavia, one would be hard-pressed to find a country with a more successful, storied past than Finland. Dating back to the formation of the American Football Association of Finland (SAJL) in 1979, the sport has experienced significant growth year after year, especially in the last two decades.

In the beginning, football was brought to Finland in the mid 1970’s through high school exchange students who experienced the sport during their time in the United States. By 1976, the first high school game was played in Finland, catalyzing the formation of the SAJL three years later.

Today the SAJL is players in both men’s and women’s leagues across multiple age levels. The Finnish league contains five senior divisions for men and two for women, along with five youth divisions and various flag football leagues.

In addition to the SAJL, Finland has been a pioneer for international play throughout its history and fields some of the world’s most decorated national teams.

In 1983, the Finnish men’s squad was one of the participants in the first-ever European Championship of American football, held in Italy. They have returned to each of the following 13 tournaments, winning five times and placing second on four other occasions.

The Finnish youth national team (19 and under) also experienced success in the 90’s, winning the 1992, 1994, and 1996 European Junior Championships. In 2010, Finland’s ladies national team competed in the first-ever international women’s tackle football tournament. They earned bronze in both the 2010 and 2013 world championships.

To add to the strong football culture, collegiate football has recently exhibited tremendous growth in Finland. In 2011, two universities in Turku each formed varsity teams and began competing against one another. In the last five years, nine more teams have been formed, along with the National Student Championship which was first held in 2013.

With a strong passion for this great game and an extremely competitive environment, Finland has been the breeding ground for some of the world’s top talent. A handful of players have transitioned from the Finnish game to the ranks of NCAA Division I College Football and even the NFL.

Currently, in Finland, the SAJL is the hub for five tackle football leagues. These five leagues are broken down as the Maple League (the highest level of competition), Division-I, Division-II, Division-III, and Division-IV.

The Maple League played its first season in 1980 and has held competition every year since. The league is currently composed of 7 teams that each play for a right to compete in the Maple Bowl (Vaahteramalja) at Sonera Stadium at the end of the season. To date, the Helsinki Roosters have been the most dominant franchise, collecting 17 Maple Bowl championships.

For a typical regular season match, an average of 450 spectators will attend. That number jumps to over 1,000 for semifinal contests. In 2016, a record number of 17 Maple League games were broadcasted live in Finland.

One team however, has completely transformed the league’s approach and has built a strong community around the sport. The Wasa Royals, led by head coach and general manager Seppo Evwaraye, have improved their product on the field, as well as their entire game day operations to provide an experience that keeps fans coming back. By focusing on building teams with a good mix of domestic and import players and creating a fun, friendly pregame atmosphere, the Royals have gained significant notoriety in their home city.

“In the city of Vaasa, in Finland, the Royals matter,” said Evwaraye. “People know us, they know about us and they want to know more about us. This wasn’t always the case.”

The Royals’ efforts have certainly paid off. In 2016, the Royals boasted an average attendance of over 1,100 fans, with a record showing of 1,589: numbers well ahead of their Maple League counterparts. 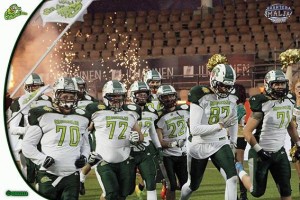 Not all teams can have the same success both on and off the field as the Royals have had. In order to keep finances and the level of competition healthy, Maple League teams are evaluated annually on a variety of factors. Team economics, the number of players in the organization, the status of youth teams, and regular season records are all considered at year’s end. Team’s that fail to meet the proper standards are then relegated to Division-I.

Overall, the Maple League is one of the most competitive, prestigious leagues in all of Europe. We should expect this level of play and fan support to continue to grow as teams adopt similar strategies to the Royals.

Directly below the Maple League, within the SAJL, is Division-I. This league holds five teams that play each other over the course of eight games. The top four teams are then placed into a playoff for the Spaghetti Bowl (Spagettimalja) championship. On average, each Division-I game will host close to 400 spectators.

At the end of the year, the strongest teams from this division are eligible to apply for promotion to the Maple League. Their acceptance is based upon their ability to meet the aforementioned standards and the overall climate of the Maple League.

Additionally, each team in Division-I is evaluated on a set of lower standards comparable to those of the Maple League. Once again, teams that fail to meet the requirements are subject to relegation to Division-II.

Finland’s Division-II league currently consists of five additional teams. These teams also play one another over the course of eight games per year. The top four teams enter a playoff for the Iron Bowl (Rautamalja) championship.

Once again, strong teams are eligible to apply for promotion to Division-I based on the aforementioned criteria. Teams that fail to perform well, however, are not subject to direct relegation.

Starting in 2014, the SAJL also added a Division-III tackle football league. This division is still in its infancy, however it already contains nine teams. These teams compete in eight games per year, just like the Division-I and Division-II levels. The best teams have an opportunity to apply for promotion to Division-II at the end of the season.

Finally, the SAJL also houses a fifth league: Division-IV. This division is solely 7-on-7 tackle football with seven teams participating last season. In each season, all teams play six games against one another, as well as a variety of tournament games. The top four teams enter a playoff for the league championship at the end of the season.

The purpose of Division-IV is to introduce both players and franchises to the game of football and increase comfortability with the sport. It serves as a medium to teach the rules and fundamentals, while also developing less-experienced players. 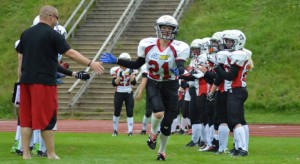 The Maple Women’s League is the highest ranking women’s league in Finland and consists of eight teams. Each team plays one another once every year for a total of seven games played by each squad. The top four teams are then eligible for the playoffs at the end of each season and compete for the Women’s Maple League final championship. The team with the worst record is relegated to Division-I each year.

The women’s Division-I league is composed of nine teams that play each other once per year: a total of eight regular season games. The top four teams battle in the postseason for a championship trophy and a promotion to the Maple Women’s League. There is currently no relegation in place for weaker Division-I teams.

This year, the Division-II league was added as a means of player development. This league currently only consists of three teams, but is expected to grow in the near future..

Starting in 2011, college-level American football started to gain serious momentum in Finland. As previously mentioned, what started as just two university teams in the same city has grown to seven teams and an entire league in just five short years.

In this league the regular season, consisting of six matches total, determines seeding for the playoffs. Each team makes the playoffs, with the top seeded team earning a first-round bye. The eventual champion must then win two or three postseason games, depending on seeding.

This year, one team in particular made significant headway in growing European football. On their way to their first National Student Championship, the Aalto Predators went viral. The broadcast of one of their games was featured on SBNation, leading to multiple interviews on CBS Sports Radio.

“The reception that one of our live streams received in the U.S. was great,” said Pekka Lamminsalo, head coach and head of football operations for the Predators. “We never expected that SBnation would write about us or that CBS Sports radio would interview our guys.”

With well-run organizations like the Aalto Predators sending alumni to the men’s Maple and Division-I league, the future is very bright for college football in Finland.

The SAJL supports a handful youth leagues for both men and women, in addition to their senior leagues. There is a combination of 11-on-11 and 7-on-7 tackle and flag leagues for all of the following age groups: under 19, under 17, under 15, under 13, under 11, and under 9. The SAJL also coordinates a variety of skills camps for its younger players.

On the whole, it is very apparent that Finland is an epicenter for the growth of American football. With inclusive, competitive, and entertaining leagues, fans and players alike have been able to cultivate a passion for the game that rivals the top countries throughout Europe. With such a storied past, we can only assume that the future holds great things for Finnish football.

“I love seeing football gain traction across Europe,” said Evwaraye. “I think we will be entering some special times in the not so distant future.”

D.J. Podgorny is the Director of Football Operations for The Growth of a Game and Premier Class Consulting and is based in Brussels, Belgium. A lifelong football enthusiast, he has experienced the game as a player in high school, a manager at the University of Illinois Division I program, a high school football coach in Monticello, Illinois and is the biggest Indianapolis Colts fan west of the Mississippi River. D.J. is also a huge fan of music and previously played bass ​in a Bay Area rock band. You can follow D.J. on Twitter at (@DJPodgorny).