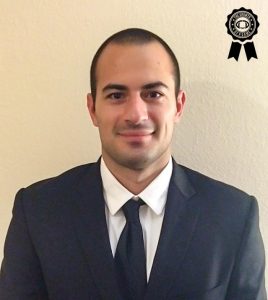 A young, passionate, and innovative coach who has had immediate success in Europe. Has a great offensive mind and is loved by his players.

Amsterdam Crusaders: Alex Cabasso has led the Crusaders to their strongest offensive output in team history. Coached the Crusaders to two of the biggest upsets in European history with victories over the Kiel Baltic Hurricanes (31-24) and the Hamburg Huskies (65-19). Qualified for the European Football League (EFL) finals against the Frankfurt Universe. 2016 Dutch National Champions.

Reus Imperials: Served as offensive coordinator. Coached the first three games of the season before leaving for Amsterdam.

“Alex Cabasso was my offensive coordinator with the Amsterdam Crusaders and the Reus Imperials. He’s extremely open-minded and has a broad knowledge of football. He has great leadership qualities and assertiveness, plus the passion and work ethic to be both a head coach and an offensive coordinator. He’s also very meticulous and organized, and knows a lot about mechanics. He puts a lot of thought into everything. He also helped out the defense at times and really understands defenses from the offensive side of the ball. I loved playing for him.”

“Alex Cabasso started as a volunteer on my staff and then became a paid assistant coach. Eventually he worked his way up to co-offensive coordinator and contributed a lot to the passing game. He’s an extremely knowledgeable X’s and O’s guy. He’s not a screamer or a yeller, but he can get his point across. The kids really paid attention to him because he knows so much. He’s a very good teacher and doesn’t need to scream at someone to get them to perform. He does everything very cerebrally.

He’s a positive guy but he wants to win. He knows what he’s doing and nobody will outwork him. He might lose a football game but he’s not going to be outworked. With a loss he puts it right aside and focuses on the next week. I’d definitely love to have him on my staff again.”

“Alex Cabasso and I met while working at a summer football camp. When he joined the staff, we hit it off right away. He’s a good guy and knows his X’s and O’s. He really appreciates the role of a coach and understands the positive impact you can have on young people. Anyone who has the opportunity to learn from him is lucky. He’s one of the best. I’d love to work with someone like him again. He just gets it. Some people do it for the money or the title, but he genuinely cares about the people he works with and it helps that he knows a thing or two about football. He understands why we do what we do.

Alex is a teacher too – he can explain things really well. When I met him, he taught me his whole offense in one sitting. He really teaches; he doesn’t just get up there with the whistle and say, ‘I’m the coach’. He makes adjustments, he has a plan. He can really do whatever he wants. He’s that kind of person.”

“He’s very motivated, motivating, and a great role model. At Jersey Coast, we get a lot of kids that come from less fortunate backgrounds who aren’t prepared academically but have the potential to go to school. Alex’s father is a doctor and he comes from a very stable situation, but he chose to help kids that are less fortunate when he really didn’t have to. He’s even-keeled, more laid-back. He has a great ability to manage people and can easily adapt to any situation. He has the personality and the charisma to be a head coach. He’s very articulate and could be the face of a program. I offered him a position but he chose to pursue his career in Europe. I’d love to work with him again.”