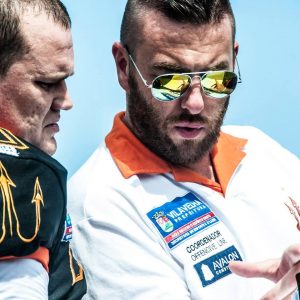 Team Ireland: Recruited the best young players from around the country to be part of the Irish U20 national team. Implemented the offensive scheme and coached the offensive line.

Vila Velha Tritoes: Joined the team at the very beginning of the regular season and implemented new techniques and broke bad habits in a short time. Created a strong working relationship with all players and saw their play elevated. Coached two players who were league All-Star nominees. Coached one player who was invited the the Brazilian national team camp. Lost in the quarterfinals to a strong team, yet laid the proper foundations which led to an undefeated regular season in 2015.

Personal: Has a bachelor’s degree in Business and Marketing from University of Limerick. Shadowed college coaches at Alfred State University in New York in 2015.

“No matter where I go, Eoin is going to be at the top of my list of assistants. We have known each other for years and both played and coached together in the past, so there is a level of familiarity and trust that is invaluable in this profession. As an offensive line coach, you really have to start with his dedication to his craft. The man lives and breathes offensive line, and he takes the success of his unit and his team personally. Not only does he teach his guys the X’s & O’s and fundamentals of offensive line play, but he brings a presence, attitude and energy that is contagious. His men love playing for him, and you need look no further than Vila Velha, Brazil where he single-handedly transformed a very inexperienced offensive line into the best unit in the entire country.”

“I have known Coach Eoin O’Sullivan since early 2014. I coached against him in Brazil and was later afforded the opportunity to coach with him as well. The first thing you notice with Eoin is that he has a true passion and love for this game. His enthusiasm and effort is second to none. His coaching style commands respect and he is a perfectionist when it comes to technique. This is exactly the style a head coach looks for to put on his staff. I have witnessed his players respond well to his coaching style and you can clearly see the level of respect his players have for him. In the 2014 season, his offensive line was by far the most prepared, most aggressive, most physical and clearly the best coached group of all offensive lines in Brazil. He shows great initiative and support as an assistant coach and is able to take on any challenge thrown at him.  He is a player’s coach as well as a coach’s coach.

If my team in Denmark had the resources, I would have jumped at the opportunity to sign him and coach with him.  He will always be at the top of my list when looking for an assistant coach, offensive line coach, defensive line coach and/or offensive coordinator. Any team that signs Eoin is going to get a winner and a person who refuses to be outworked.

If you have any questions please do not hesitate to contact me.”

“I had heard high praises of Coach Eoin O’Sullivan’s work long before we had the chance to be part of the same staff with the 2016 Warsaw Eagles. But it was by sharing office space, practice fields, and sidelines with him that I was able to witness how passionate Coach O’Sullivan is about this game. He very quickly creates a special bond with his players, who undoubtedly follow his lead.

When it comes to offensive line technique, Coach O’Sullivan takes pride in perfectionism, attention to detail, and the fundamentals. He’s always studying and perfecting his craft.

More than the just the OL coach, Eoin was extremely important to our 2016 group as the assistant head coach, showing great leadership at crucial moments and an uncanny passion for the program. He understands the struggles in the daily life of an American Football athlete in Europe and the sacrifices required in order to succeed, as he once was once one of those players – born and raised in a country where American football isn’t a traditional sport.

More than just a job, I would say Eoin O’Sullivan coaches with passion, with the objective of increasing the level of American football played outside the United States and spreading the love for this incredible game.”

“Eoin O’Sullivan was a defensive and offensive lineman with the University of Limerick Vikings when I joined in 2006. Not only a student of the game as a player, Eoin was also Chairman of the team, and his leadership was apparent from day one. His passion, competitive spirit and attributes brought us together on the offensive line. As a player/coach, I was delighted to have a like-minded team player who leads from the front. He was first to practice and would stay on to help he and his team improve on the field. Personally, I’ll be delighted to see Coach O’Sullivan excel in his current role as an Offensive Line Coach and wish him every success in all his endeavours. “

“During the 2014 season, I had the pleasure of being an offensive lineman led by Coach Eoin O Sullivan. He offers a unique style of discipline that makes any player love playing as an offensive lineman. The Vila Velha Tritões are considered to have the best o-line unit in the entire league, and even after Coach O’Sullivan’s departure his teachings are still paying dividends with the players. He is never satisfied; always pushing his players to the limit and doing his best to make everyone the best player they can possibly be. Coach O’Sullivan is a remarkable coach and I’ll never forget what I’ve learned and what I’m still learning from this great person.”

“Eoin O’Sullivan and I first worked together during my time as head coach of the Drogheda Lightning. He very quickly established the players’ trust and respect. Eoin implemented our offensive scheme, while bringing his in-depth knowledge and experience of offensive line play. In early 2015 I was appointed as the head coach for Irish national U-20 team, and without hesitation Eoin was at the top of the list for my new coaching staff. I was delighted to appoint him as my offensive coordinator and offensive line coach. Eoin has always delivered exactly what I have asked, and more. He is one of the brightest young coaches I have had the pleasure of working with in recent years. He brings 100% passion and commitment and a solid knowledge of strategy and football fundamentals.”

“I first came across Eoin O’Sullivan as an opposing player, which in my book is still the best way to judge the caliber of a player. Eoin was part of a young University of Limerick team challenging for national titles. I would later go on to become head coach of the University of Limerick Vikings and worked closely with Coach O’Sullivan. His knowledge of the schemes we used and how to apply them made him an asset on the o-line and as an assistant to the coaches. No surprise that he was a key part of a “Three in a Row” Shamrock Bowl-winning team. The team is a priority for Eoin. His ability to imbue his players with a real and functioning sense of teamwork, plus his football knowledge and work ethic make him one of the best young coaches I’ve worked with. Eoin also comes into his own when problem solving. Often working with limited resources, the  application of his infectious energy and willingness creates a winning environment that extends beyond his area of direct responsibility.”