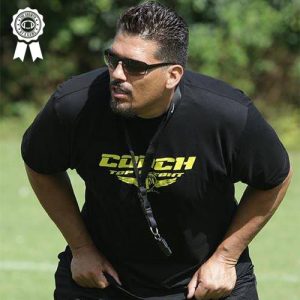 A proven winner who has instantly turned teams into perennial powerhouses. Knows the fundamentals of the game better than anyone.

Holstebro Dragons: Dan Ruiz was hired as the head coach for the Holstebro Dragons for the 2015 season. Signed through 2016. 2016: Led the team to a 8-1 start to the season in the Danish 1st Division. 2015: Completed an undefeated 11-0 season in 2015 after taking over a program that had finished 0-9 in 2014. Offense scored 372 points in 9 games. Defense only allowed 20 points in 9 games. Best overall defense in Denmark. Turned around a team that hadn’t won a game in two years and made them undefeated division champs. Danish Division 2 Champions. The Dragons were promoted to Division 1 following the season.

•The Holstebro Dragons and Guardian Caps: Leading the Way in Player Safety

“I first spoke to Dan Ruiz in 2013 when I was under contract as the head coach of a different team in Brazil. His message caught my eye because of his background in both football and law enforcement, and that he was committed to not only coaching abroad but having the opportunity to share the experience with his son, who is a tremendous player. We did not have a position available, but Dan and I had some pleasant exchanges and I wished him well.

As fate would have it, Dan and his son, Blaine, ended up signing with our biggest rival, the Vitoria Antares shortly after I had signed with the Vila Velha Tritoes. Before Dan and I ever stepped onto the same football field, I had the pleasure of getting to know him as a person. He is stand-up, no nonsense, and as honest as they come. You can tell he has a lot of passion and puts a lot of himself into whatever he is doing. He did not come into a team with a storied history of winning games. He came into a team that was hoping to rebuild and immediately raised the level of expectation.

Aside from facing off in our season finale, Dan and I were able to put together some initiatives while coaching in the same state, Espirito Santo. This included organizing a joint practice between our two teams–who let me remind you, are bitter rivals (and rivalries in Brazil run deep, particularly when it comes to sports). But Dan handled the situation with tremendous poise, and the event garnered national attention and set an example to other programs of how to properly work together toward the common goal of growing American football in Brazil.

And therein lies Dan’s best quality. There are a lot of coaches who know X’s and O’s, who can yell and scream… but so much is riding on an import head coach that a team should always look for something more. And what Dan brings is a lot more. He brings leadership and vision to a program. He will establish goals for your team and raise the expectations of everyone involved. He is a tremendous person, a tremendous coach, and I would recommend both him and his son, Blaine, to any team in Europe.

Signing them will be a package deal that you really cannot beat. If you have any further questions about Dan Ruiz as a coach or person, please feel free to contact me.”

“I met Dan Ruiz approximately 17 years ago when he decided to volunteer his time as a player for the San Diego Enforcers. The San Diego Enforcers are a semi-pro football team made up of public safety personnel that play for charity each season. Dan came to the program with the understanding that our organization wasn’t just about playing football but also giving back to the community. The NPSFL is made up of 20 teams throughout the country and only allows public safety officers on the teams. He has always participated in our off-the-field activities and works very closely with our chosen charities.

Almost immediately, Dan took a leadership role with the team and was a captain every year that he played for me. His commitment level and hard work were readily apparent and he assisted the team in many ways. Although I’ve been in the coaching field for over 35 years, I feel that he is one of the most talented players I have ever been associated with. He played a key role in helping our organization win over 90% of our games over these years with multiple championships.

When his playing days were over, Dan moved into a coaching role with the Enforcers and led one of the best prepared, structured, and disciplined offenses in the league. I have also developed a close friendship with Dan as we both share the love of football, mentoring young men, and raising money for charity.

Dan has turned into a tremendous coach, leader, and motivator who believes in his profession and understands the importance of giving back to his community. I know that he has the ability and drive to coach at any level and would recommend him for any organization.

Please do not hesitate to contact me with any questions.”