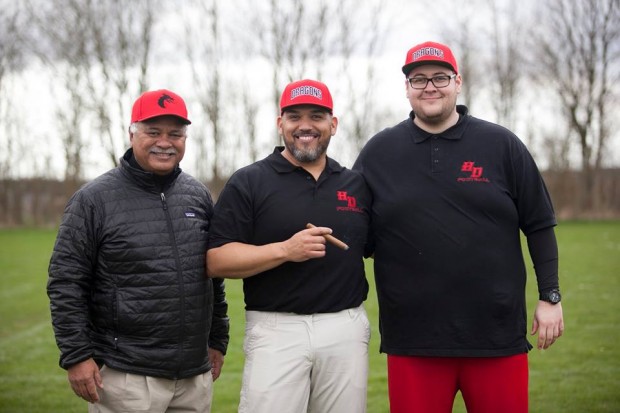 Today Allan Bridgford and Dan Ruiz made some major statements in European football.

Allan Bridgford, quarterback for the Amsterdam Crusaders, led the “Cru” to a 31-24 overtime road victory over a heavily favored Kiel Baltic Hurricanes team. The Baltic Hurricanes are one of Germany’s best teams and the defending European Football League (EFL) champions. This victory over the Baltic Hurricanes surely marks one of the biggest upsets in Europe this season. The Crusaders are now 4-0 this season and have outscored Dutch opponents 172-0 through 3 games. The team’s next game will be against the Arnhem Falcons on April 24th.

Dan Ruiz led the Holstebro Dragons to a 46-3 opening victory against the Avedøre Monarchs in Danish league competition. The win is the Dragons’ first in Division 1 play, and the team has now rattled off 12 consecutive victories since Ruiz took over as head coach. The Dragons finished 11-0 in 2015 and won the Danish Division 2 championship. With the victory, the Dragons have made a strong statement that they intend to challenge for their second championship in as many years. The team faces the Roskilde Kings on the road in their next game on April 23rd.

Bridgford and Ruiz are both represented by The Growth of a Game. The weekend does not end there, however. 4 members of The Growth of a Game team – Matt Dias, Eoin O’Sullivan, Alexandre Braga, and Greg Watson – will lead the Warsaw Eagles into battle against Białystok Lowlanders at noon on Sunday, April 10th. The game can be viewed via live stream by clicking here.