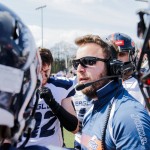 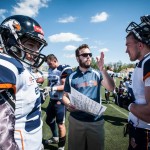 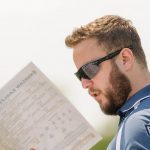 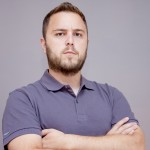 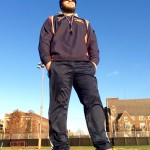 A young, motivated, and cerebral teacher of the game who has coached in the United States, Europe, and Brazil.

Wyszków Rhinos: Dias worked as Defensive Coordinator and Assistant HC under head coach George Booker during the Rhinos’ first season as part of PLFA 1, Poland’s second division, and was trusted with the challenge of developing the young team’s basic fundamentals in order to compete in a more advanced level. Despite the record of 2-6, Dias helped the Rhinos to reach its main goal of remaining in PLFA1, a considerable achievement for a team that has been competing for just three years.

Warsaw Eagles: Dias’ defense posted two shut-outs in nine games over Kozły Poznań (48-0) and Husaria Szczecin (42-0), the latter coming in the the first round of the Polish Topliga playoffs. The Eagles finished 5-4, losing in the Polish Topliga semifinals to the eventual champion Wroclaw Panthers, 28-17, whom would also go on to win the 2016 IFAF Europe Champions League tournament.

West Philadelphia HS: Believed to be the first Brazilian coach to be part of a high school football staff in the United States. Helped the West Philadelphia High School varsity football team to reach the Public League’s AAA finals for two consecutive seasons and for the first time since 1912. Istalled a 4-2-5 defense package in for the 2014 season and helped WPHS win its first playoff game in history. Team improved its record from 4-6 to 8-3. Coached the 2015 Philadelphia All-Star Game Defensive MVP. Was ranked “Highly Qualified” (apt to accept a head coaching position) on a written and oral examination applied by Pennsylvania Interscholastic Athletic Association’s District XII head coaches in June of 2015

Paraná All-State U-19 Team: Offensive Coordinator for the Brazilian state team of Paraná for the 2012 U-19 National Tournament. Finished runner-up.

Curitiba Brown Spiders: Former player for the team that pioneered football in Brazil. Served as Defensive Coordinator in 2011 before being named Offensive Coordinator after the 2012 State Championship. Took over as Offensive Coordinator and ultimately Head Coach midway through the 2012 National Tournament. Managed roster of 70 players from ages 16 to 40. Led team to a Top-5 finish in the AFAB National Championship. Stepped down as a head coach after the 2013 training camp to move to the United States. Implemented the offense and defense in the beginning of 2013, later resulting in the Brown Spiders becoming runner-up in the 2013 State Championship. Six players selected for the 2012 Brazilian National Team (Brasil Onças). Coached LB Eduardo Murilo Viana who competed in the 2015 IFAF World Championship for Brazil.

Personal: As an athlete, Matt Dias was part of the Curitiba Brown Spiders, the first Brazilian team to acquire American football equipment. Was a starter as defensive end in the historical inaugural game in October of 2008 against the Barigui Crocodiles. Was granted Defensive MVP honors for his outstanding performance. Has a Bachelor’s Degree in Journalism from Universidade Positivo (Curitiba, Brazil) and more than a decade of experience in Public Relations and online news reporting. As a freelance international correspondent for the newspaper “Gazeta do Povo”, has been on-location to cover the last seven editions of the NFL’s Super Bowl as well as the 2010 Pro Bowl.

“Matt Dias is going to be a head coach again one day, and I hope he has a few years in him as my assistant before he makes the jump. If you sit down and talk football with him, it doesn’t even take five minutes for you to realize the scope and depth of his knowledge. He approaches the game the right way, with great attention to detail and the mental flexibility to think outside of the box. This will be our first time working together, but he knows what I want to do on defense, and more importantly, he’s going to bring a perspective that not only sharpens me but sharpens the entire staff. That, in particular, is an area where I will lean on him as we take the Eagles and develop them into a true football program.”

Having spent some time as a coach in Brazil, I got to see first-hand how much of a fiery passion that Brazilians possess for the game of football. It is a passion that flows through Coach Matt Dias’ veins every time he steps on the field and even when he’s sitting at his desk, watching endless hours of video for his team.

Growing up in Europe and being involved in this great game, you have a tendency, rightly or wrongly, to think that the only people you can learn from are coaches that are born and raised in the USA. That mindset changed forever the day that I met Matt Dias.

When it comes to the defensive line, he is the finest teacher I have ever met. His attention to detail and genuine love for the position help him to mold every player he meets into someone who can contribute to the team right away. He is committed to fundamentally sound linemen, but more than that, he always wants them to know what the bigger picture is. He wants to develop smart football players.

As our defensive coordinator, I was blown away by how gifted a football mind Matt has, and it was immediately apparent that we were a better program for having him. I would like to say that ‘Coach Matt’ eats, sleeps and breathes football, but for that to be true he would have to sleep sometimes! He’s truly committed to his craft.

I could write pages on what he brings to a team, but the short version is that he made our office a smarter place, he made our practice field more organized, and he made me a better coach just watching him. Matt is not just a football coach – he is a teacher of football.

“Coach Matt Dias will always and forever be remembered in the West Philadelphia history books in my opinion. He was the first of his kind. Just like the 2011 Speedboy football team. They were the first to win 9 games straight. He was the first Brazilian coach that West Philly ever had. He started from the bottom as a volunteer, and managed to parley that into having a highly qualified coaches rating. In the Philadelphia school district that means quite a lot. It means you posses the knowledge to be a head coach and the ability to run your own team. His knowledge of football grows on a consistent basis because he is a true student of the game. Even though he was born in another country, he was able to connect with the kids because he comes from humble beginnings. That’s a major plus when you have to work with kids from the inner city or lower income areas. Not having him for the first time in two years as my assistant on the defensive side has definitely made an impact on me. He made things so much easier. He covers a lot of the intangibles. I can’t say enough about this guy. I hope someday we could end up on the same sideline again.

“I had the pleasure of playing for Coach Dias in 2016 for the Warsaw Eagles. As a young Defensive Coordinator, it was clear that he came in with great knowledge of the X’s and O’s, but more importantly he was able to push us to play for him and more importantly for each other. Many coaches know a playbook, but not many know how to reach their players and bring more out of them than they knew they had.

Aside from his role as the defensive coordinator, Coach Dias also took on the responsibility of coaching the defensive line and kickers. Both of whom became 2 of our more solid units. I truly enjoyed playing for Coach Dias and I’m excited to see where his career in coaching takes him! If you want a coach that’s going to work harder than any you’ve ever seen, then hire this man.