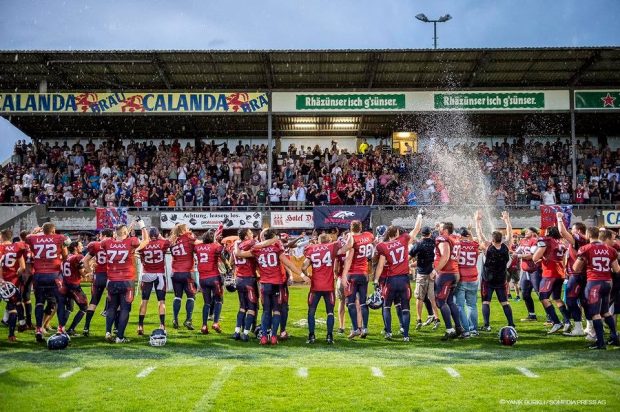 The Calanda Broncos after their 2017 Swiss Championship. (Photo courtesy of Yanik Bürkli)

I asked the elderly woman behind the cash register at Montalin Pharmacy a simple question out of curiosity: “Have you heard of the Calanda Broncos?” She quickly flashed a soft smile and her eyes almost seemed to light up the way a small child’s would if you asked if they wanted ice cream. She replied, in a hearty Swiss-German dialect, “Oh yes, they play right over there,” pointing out the window and down the street towards a small field.

“They are the best in Switzerland.”

I was standing about 200 meters from Sportplatz Ringstrasse, home field of the Calanda Broncos American Football Club. Nestled in the Swiss Alps in the eastern part of the country, Chur is a small mountain resort town, notable for its access to ski slopes and alpine passes. In fact, Calanda is actually the name of the mountain that looms over the town, which is a strikingly fitting name for the Chur-based team. Sitting about 600 meters above sea level and with a population of just over 30,000, one might not think that this would be a place where American football reigns supreme in a country, nonetheless a continent, where soccer is king.

The Calanda Broncos were founded in 1992, although their history dates back a couple years before that. While Mathias and Marcel Brändli were visiting Southern California in the fall of 1990, the brothers decided to check out the American brand of football by going to see a game between USC and UCLA. The 1990 USC-UCLA game, affectionately known by fans as “The Shootout”, will forever be remembered as one of the all-time great games between the two storied programs.

It was USC’s Todd Marinovich vs. UCLA’s Tommy Maddox. Each team scored 21 points in the fourth quarter. UCLA scored with 1:19 left, but USC scored with 16 seconds left and won, 45-42. Mathias and Marcel were so captivated by the sport that they decided to bring the game back with them to their native Switzerland and started their own American football club. Little did they know that a Swiss football giant would be born from the ashes of a college football game in Los Angeles.

That kid has become one of the most reputable and respected figures across the landscape of American football on the European continent, and now serves as the head coach and general manager of the Calanda Broncos. Heading into his fifth season with the club, Coach Buffum’s record is an astounding 47-6, to go along with three Swiss Bowls and a EuroBowl Championship during that span. His track record in Europe is a strong one; he started his career with a team coming off a 1-win season in Austria’s 1st division and ended his time as QB and then head coach of the Swarco Raiders Tirol with two Austrian Bowl trophies, the 2004 EFAF-Cup title, and Innsbruck’s first EuroBowl championship in 2008. In total, he has accumulated six national championships during his years in Austria, Switzerland, and Norway.

How Buffum ended up in Calanda is a story of its own. In the summer of 2010, Buffum, then offensive coordinator for the University of North Carolina Pembroke, visited Chur for the first time, as he came to watch Marko Glavic, who had lead his 2008 Swarco Raider team to its first ever EuroBowl championship in Buffum’s final game with the Raiders. He wasn’t planning on coming back to Europe at that time to coach, but after visiting Chur and watching the Broncos play, he thought to himself, “If I ever do come back, this is where I would want to be.”

The rest, as they say, is history.

With a career head coaching record of 103-24 in Europe, Coach Buffum knows a thing or two about building a successful program. He’s coached in smaller cities and less-prominent football-playing countries, and yet has still reached a level of success that few have. Only a handful of current Broncos players have played for Buffum in each of his two stints as head coach in Calanda. Perhaps there is no one better to share some insight on his coaching style and philosophy than Marco “Rex” Mahrer and Nate Fellberius, two of the longest-tenured Broncos players.

When asked about what separates Coach Buffum from other coaches, Mahrer mentioned that his ability to connect with players on and off the field as something that stands out. “It’s hard to define that line of being tough and authoritative while also being someone who’s welcoming and approachable. He walks that very thin line so well.”

Fellberius takes it a step further, “I think the reason why he’s experienced so much success, is because he understands that the game is different out here. It’s not college or professional in the States – guys here play American football as a hobby.” Clark Evans, the championship-winning American import quarterback for the Broncos, observes how Coach Buffum is involved with the Broncos much more than just on-the-field coaching. “He understands the ‘import life’ and he’s been through that lifestyle and knows how to handle imports. He gets the culture. He has his hands in every aspect of the organization – he’s not only a coach.”

You often hear coaches talk about their “building blocks of success”, or any number of three-to-four word phrases used to describe the values of their program. John Wooden wrote a book about his Pyramid of Success at UCLA. Butch Jones built his program at Tennessee on Brick by Brick. P.J. Fleck literally owns the rights to the Row the Boat mantra that he now uses at Minnesota. Call it coach-speak or clever wordplay, these coaches are trying to create a culture of success in their own unique way.

When asked about what his “pillars of success” might be, Buffum didn’t give a specific layout or format behind his program’s recent accomplishments. There are no Row the Boat banners hanging in the locker room. There aren’t posters with Brick by Brick plastered in his office. And he hasn’t written a book about his methodologies. He did, however, mention three things that he feels are imperative when building a quality football team.

Pillar One: Developing the bottom half of your roster, or in other words, building depth. “You have to allow your backups to get playing time throughout the season, and not just at the end of lopsided victories,” Buffum states. This will allow your non-starters to be engaged over the course of the entire season. Then, later in the season or in playoffs, if a starter goes down another guy can step in and the moment not be too big for him. As most coaches in Europe can attest, building depth is one of the biggest challenges a coach faces over the course of a season.

Pillar Two: You have to be really good at three things: recruiting, developing players, and scheme. Buffum explains that, “Many coaches recruit well and develop players well, but they don’t have a good scheme. Or they have a good scheme and recruit the right players for that scheme, but they don’t develop their players. In order to reach the level of success that you want, you need to be really good at all three.” This is easier said than done, but it is something that can take your program to new heights.

Pillar Three: You have to set a minimum standard with participation, but it has to evolve with your team. Every team has issues with players showing up to off-season workouts, in-season practices, and even games. Where do you draw the line? Buffum separates football players into three categories, “Your A players come to every workout, practice and game. Your B players do the minimum that’s required (coming to practice, showing up sometimes in the off-season, etc.). Your C players just want to show up on game-day and get good pictures for social media. It’s important to give your captains authority, responsibility, and ownership of categorizing where you draw the line. You want your A’s to pull up more B’s, and your B’s to pull up more C’s, and ultimately you want to create a standard where the C’s either get on board, or they cut themselves by not meeting the minimum requirements.” Heading into his fifth season in Calanda, Buffum expects and demands more from his players with regards to participation.

There are many ways to dress it, but football is just different in Chur. Quaint Swiss mountain towns aren’t exactly known as manufacturers of high-quality American football. In fact, the Calanda Broncos remain the only EuroBowl champion in over 30 years of competition, that is located in a city of less than 100,000 people. But what makes football particularly unique in Chur? Rex Mahrer thinks it’s the fans that set them apart. “We have the best fans in Switzerland. We only have around 600-700 fans at home games, but they are the rowdiest in the league.” Nate Fellberius agrees and notes that Broncos fans are even known nationally. “Our fans are notorious in Switzerland. If you go to Bern, for example, and ask a random person about American football in Switzerland, they might say, ‘I know there’s a good team in Chur.’”

Additionally, the overwhelming majority of their players don’t travel great distances to play for the Broncos. Conversely, in Germany it’s not uncommon for several players to travel between 100-200km for practices and games each week in order to play for a specific team. Outside of the Broncos’ import players and a couple of players that travel from Zurich, every player on the roster lives in or around Chur. Even the players who travel from Zurich, as Mahrer describes, were born and raised in Chur and grew up playing within the Broncos organization. This is why the Broncos are represented so well at the national level: they have a core group of local players.

Coach Buffum understands the importance of developing local talent. Seemingly hundreds of teams throughout Europe appear to live and die by their import players. But as one coach described it to Buffum, “the team is the coffee, the imports are the cream.” Import players can provide that added spark to your team, but as many experienced coaches will tell you, over the long-term, games are won and lost by your local players.

Buffum still sees room for improvement in certain areas in the American football community. Political instability in the European American Football community has had multiple negative consequences. Most notably, international competition has taken several steps backwards since the beginning of this decade. He notes that the differences between leagues’ import structures could be a hindrance moving forward. “One issue I see is that Europe should take steps towards uniform import rules. It needs to not benefit any one particular model, but have a focus on local players and coaches.”

The quality of structure and play in Switzerland does appear to be on the rise. Evans, who has also played in Germany and Slovenia, thinks the future of football in the country looks bright. “I think Switzerland is on the up-swing. People are wanting to come here. The other teams in the league appear to be getting better and better and a lot of that has to do with Calanda raising the bar.”

Players and coaches alike seem to shuffle around season after season in Europe, causing a certain level of inevitable discomfort amongst teams. Many assume that the tools and resources necessary to field a championship caliber team often lie in the big cities of Europe (Paris, Milan, Vienna, etc.). Even so, in the midst of all the shuffling, the Broncos reign supreme in Switzerland and beyond. This doesn’t appear to be changing anytime soon.