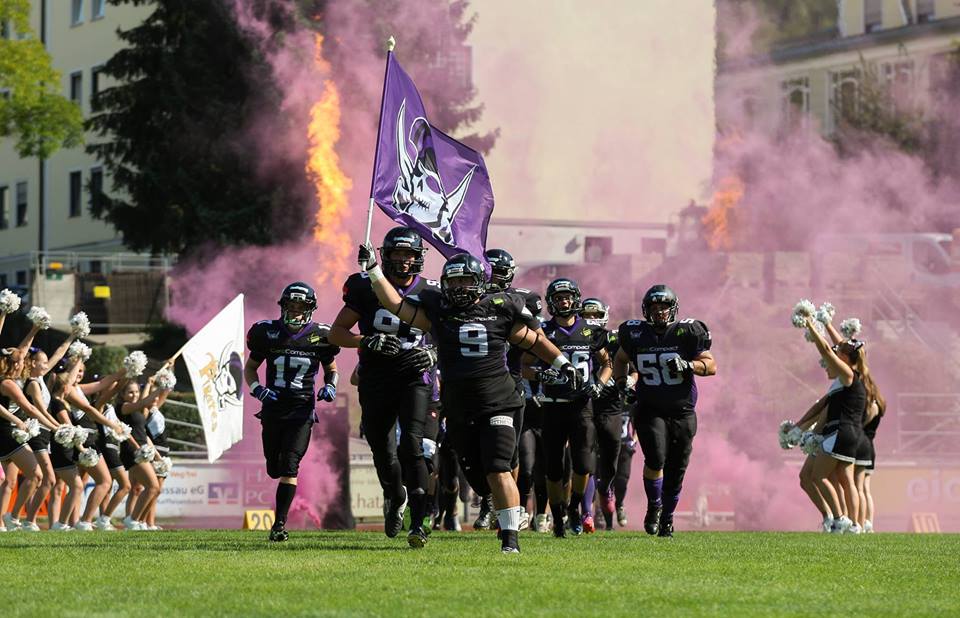 Photo courtesy of the Passau Pirates.

Think for a minute about college football in the United States. Player ages typically range from 18 to 22 and, while they are still developing, they’re in the prime of their physical condition. A certain level of passion distinguishes this demographic from others – their love for the game is the driving force behind the hard work they put into becoming bigger, faster, stronger, and overall, better.

College towns such as Ann Arbor, Athens, and Tuscaloosa are completely enamored – obsessed even – with their hometown teams that take the field on fall weekends. Notable players feel like mini-celebrities walking around town among people hopeful for a picture, autograph, or even a sheer moment of eye-contact.

Perhaps no team in Europe better embodies this ideal than the Passau Pirates. Passau is a town in the southeast corner of Germany, situated on the Austrian border and less than 60km from the Czech border. The town’s population is about 50,000, nearly a quarter of which is made up of students from the University of Passau. Therein lies the epitome of a small college town.

American football has been around in Passau for a few decades. In 1987, some students at the university founded their own “college team”, the Passau Red Wolves. A couple of years later in 1989, the Passau Steelers were created to offer non-students the opportunity to play the new sport. Although both teams enjoyed considerable success over the course of the next decade, the financial deficit each team faced forced both teams to wave their proverbial white flag and call it quits by the late 90’s.

Another decade had passed in Passau without American football until the fall of 2008 when Florian Schneider, a German-born player with an American father, posted an ad in the local newspaper calling for the founding of a new club in the city. Florian had played previously in Kaiserslautern, a city in southwestern Germany near the French border, but had recently relocated to Passau with his family. Suddenly handfuls of former Red Wolves and Steelers emerged like phoenix from the ashes looking to get involved with the development of the new team. This is where the Passau Pirates were born.

Things started off slow for the Pirates. In their first season in 2009 the Pirates competed in the Aufbauliga Bayern, southern Germany’s seventh division of American football. Not only did the team go winless in that first year, but they failed to score a single point. The only way to go from there was up for the Pirates, who steadily progressed and eventually ascended to the Bayernliga (fourth division) by 2014, where they remained for a few seasons.

In 2017, a 24-year old quarterback from Southern California took over the program with no prior coaching experience. Balancing head coaching duties with quarterback duties is quite a tall task, especially when you factor in his youth and inexperience. Shattering stereotypes and expectations, Andrew Griffin led the Pirates to an undefeated season that culminated in a lopsided championship victory. The Pirates defeated the Hof Jokers – who were successful in their own right with a 10-1 record heading into the game – by a score of 46-8. This win propelled the Pirates into the Regionalliga (third division), where they will compete in 2018 for the first time in club history.

The Pirates’ pass-heavy offense featured four rookie wide receivers, all of which caught multiple touchdowns on the season, and all of which are university students. With a learn-as-you-go mentality, the Pirates’ offense showed steady improvement throughout the season as the young players gained more understanding of the game and developed chemistry with one another. Defensively, the Pirates were slightly more experienced. Led by veterans Flo Schneider, Julian Riedlinger, and Thomas Ochmann, the defense only gave up 17 points per game last season in 2017, good for best in the league.

When asked about what values are prioritized when leading a student-heavy program, Griffin reverted back to how they start every practice: family and energy. At the beginning of each practice the Pirates break the opening huddle with “Family & Energy!” According to Griffin, these two qualities are non-negotiable. “I can deal with mistakes. But playing with high energy, even when you don’t feel like it, is really important to us. Family and energy are two things we place a lot of value in.”

Griffin’s unique, yet effective, leadership style is something to note. “I don’t want archaic leadership, I want communal leadership. I don’t want soldiers and grunts, I want other officers on the field with me. I’m 25-years old – I’m thankful for every drop of trust I get from the older players.” The Pirates aim to have every player, regardless of age or experience, rowing in the same direction to ultimately drive the ship forward. This echoes a similar sentiment of the late Hall of Fame coach Vince Lombardi,

“People who work together will win, whether it be against complex football defenses, or the problems of modern society.”

Building a championship team didn’t come without its struggles, however. Practice attendance and the ability the attract university students are two mundane tasks that became quite difficult challenges. Griffin even reflected on his own evolution from being one with a negative criticism approach into a positive reinforcement approach. “Guys didn’t want to come to practice to get ripped on – they wanted to feel appreciated and valued. I specifically tried to highlight guys who showed improvement each practice/game and tried to find ways to positively reinforce them.”

With such a unique demographic comprising the roster, Griffin wanted the Pirates to focus on three things: fun, fast, and smart.

Fun – “With such a young median age, we want to place an emphasis on having fun playing this sport. At the end of the day, this is a hobby for us. We want to enjoy it.”

Fast – “We practice ‘explosiveness’ every practice. We want people to fear our pace of play, but even more so our ability to be fast and explosive every time we touch the field.”

Smart – “We always want to have a schematic advantage over everybody else. We want to be the smarter team on the field with whomever we play.”

Igor Miloš, longtime Pirate standout, has helped shape the culture of the Pirates since his arrival at the end of 2014. Coming off back-to-back GFL2 championships, Miloš helped cultivate the championship mindset of the Pirates. “After winning championships in Bielefeld [2013 GFL2 North Champions] and Kirchdorf [2014 GFL2 South Champions] I hoped to bring those winning ways to Passau. We progressed in 2015 and 2016 but when Andrew arrived in 2017 we all knew he was the finishing touch we needed. The rest is history.”

The aforementioned “finishing touch” might refer to the process that was put into action last season. A team’s “process” is a term aggressively floating around the coaching world today. Several prominent coaches, most notably Nick Saban of Alabama, have recently talked about their team’s “process” and what that means to the culture of their football program.

Griffin attributes much of their 2017 success to the championship process the Pirates established; this process remains intact for the 2018 season in hopes that a similar cumulative result is on the horizon. The hashtag #BuildTheShip is the new mantra for the Pirates and acts as a reminder to the process of building a championship caliber team. Griffin explains, “goals are fine, but habits are a necessity. It takes a long time to build a ship. If we are constantly checking the status of the ship, it will take forever. But if we roll up our sleeves and work, the ship will be completed. We want to control our process, and we are striving to have a championship process.”

With over 1,500 football teams spread throughout Europe’s 41 football-playing countries, many arrive at success in a variety of fashions. Some plaster goals across their locker room walls or have goal charts for drives, games, or seasons. Others simply focus on habitually doing the best they can. When asked about what his goals are for the 2018 season, Griffin admittedly accepted the notion that a championship would be nice. When asked to elaborate, Griffin flashed a quick smile and a subtle laugh.