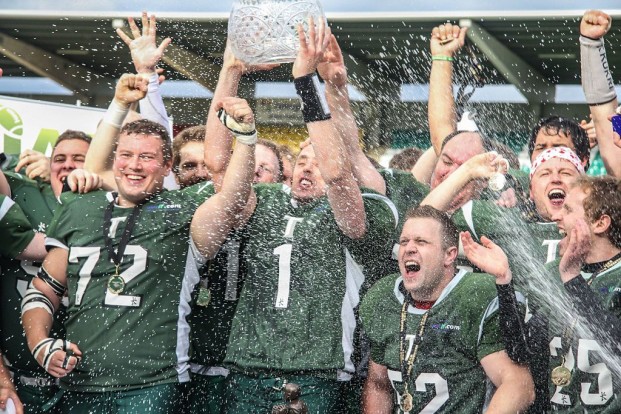 The Belfast Trojans hoist the Shamrock Bowl Trophy as national champions for the first of four times in as many years. No Irish team has ever won five championships in a row.

To any fan of American football, the story of the sport in Ireland is not only fascinating but also deeply inspiring. The sport is growing in Ireland at a faster pace than in almost every other country in Europe. The Irish American Football Association (IAFA) is the recognized governing body for the sport and works very hard to set and maintain fair standards for teams and foster the elevation of high-quality play. The Irish government subsidizes the sport via grants, for which teams can apply to help offset the costs of equipment. Teams are popping up all over the country and the sport is receiving more publicity than ever. However, the sailing has been anything but smooth.

American football began in Ireland in 1984 with the formation of the Irish American Football League (IAFL). The first Shamrock Bowl (the championship game in Ireland) was played in 1986 between the Craigavon Cowboys and the Dublin Celts. Despite losing the game, the Celts went on to become the top team in Ireland for the following decade and won the Shamrock Bowl a total of 5 times during this stretch.

During these early years there were numerous teams, but each one existed in a relatively independent state. There were no overarching guidelines being upheld and there was very little, if any, league structure. Teams would split, old teams would fold, and new teams would begin – all in a matter of years, or even months. Oftentimes, the teams were left to organize games amongst themselves with forfeits occurring on a relatively consistent basis due to insufficient players.

Despite the generally hodgepodge existence of American football during this time, it is important to note that there were in fact numerous teams. The Irish were playing football and doing so with passion and vigor. They did the best they could in the absence of any true organizational structure, and they were deeply motivated to improve despite these difficulties.

Additionally, a weekly highlight package of NFL games began airing in the 1980’s on network television. This hour long program would generally feature a game of the week and would also include news and highlights for all the other NFL games occurring over the past week. This program was apparently extremely popular and made the game of American football widely known throughout Ireland.

However, the status quo was unsustainable. There was simply too much disorganization, not enough structure, not enough broad vision, and not enough long-term collective planning. 16 years after its inception, the IAFL folded in 1999. There was no organized American football in Ireland for nearly 2 years.

There is however one exception and the story must be told. During this hiatus, an American high school named Mt. St. Joseph’s traveled to Ireland to play a game against an Irish team as well as a notably successful British team called the GB Lions. The games were to be held in Ireland, yet there were no teams in Ireland to take on Mt. St. Joseph’s, who wanted to face an Irish team during their trip. Seemingly out of thin air, a game was mysteriously scheduled against an Irish team which simply didn’t exist. Word was spread, and the players appeared on game day. Anyone who wanted to represent Ireland showed up and played.

Despite losing the game 34-12, this moment was a critical component in the story of American football in Ireland because it signified the birth of Team Ireland, the National Irish American Football team that is currently coached by Ciaran O’Sullivan – a team that is justifiably proud and has ambitions of competing in the greater European theater in years to come. Additionally, this game signified the rebirth of American football in Ireland.

In 2001, representatives of four teams – the Dublin Rebels, the Dublin Dragons, the University of Limerick Vikings, and the Carrickfergus Knights – assembled and inspired the resurgence of the IAFL. In 2001, there was an atypical season held during winter. These were the only four teams, so they each played one another twice and the two teams with the best records played each other in the rebirth of the Shamrock Bowl. The Dublin Rebels won this game, which became the first of 7 championships for the team. To date, no team in Ireland has won as many championships as the Rebels.

American football in Ireland was back in business. These four teams were the backbone of the reformation of the IAFL and they were all instrumental in the creation of the IAFA. The following year in 2002, the Cork Admirals joined to become the league’s 5th team. These five teams competed as the only official teams that year. The Carrickfergus Knights emerged as champions in the Shamrock Bowl at the end of the season.

In 2003, one of the most important developments in American football in Ireland took place. Fearing a repeat of years past, where genuine passion and widespread popularity for the sport were crippled by the absence of a strong structural foundation, IAFA set up the “Developmental 8s,” or DV8s. This is a system of 8-man football which essentially serves as a trial run for teams seeking to join the IAFL. The idea was to create a stepping stone for new teams before they could play in the league. In this setting, teams needed less players, had less expenses, and were overall much easier to start and manage. This design allowed teams to learn how to manage themselves before making a full-fledged commitment to 11-man football, and it allowed the league to monitor and guide teams through a developmental process with the ultimate aim of implementing stability and long-term consistency among each of the teams, and therefore, among the league itself.

Some teams drifted away, but some made the cut. The Belfast Bulls was perhaps the most important team to come to fruition through this process. The Bulls were the predecessors of the Belfast Trojans, who split from the Bulls in 2006. Despite a rocky beginning in the IAFL, the Trojans have won 4 consecutive Shamrock Bowls (2012-2015) and have fierce ambitions of becoming the only team in Ireland to win 5 championships in a row (the Dublin Rebels also won 4 in a row, from 2003-2006). The Trojans are widely considered the best organized and most competitive team in Ireland. Their success is proof of the wisdom, practicality, and long-term thinking behind the DV8 system implemented by IAFA and upheld to this day.

Now, only 15 years after folding, and under the auspices of the league’s new operational approach, there are 3 tiers with a total of 22 teams. At the top is the Shamrock Bowl Conference (SBC), which is divided into the SBC North and the SBC South. The next tier of teams is the Irish American Football League 1 (IAFL-1). Lastly there is the Irish American Football League 2 (IAFL-2).

Not only are there more teams than ever before due to new teams appearing all over Ireland, the league itself is structured in a way to promote and sustain the longevity of team membership. In addition to maintaining the Developmental 8s, IAFA promotes the highest possible level of American football in Ireland through a system of automatic promotion and annual organizational audits.

Every year, the top team in the IAFL-1 and the IAFL-2 are promoted to the next level in the hierarchy. Additionally, the bottom teams in the SBC and the IAFL-1 are relegated to the corresponding lower level. The top teams are rewarded with the opportunity to move up the ladder of competition, and the lowest performing teams are moved down to lower levels of competition where they will be more likely to address their issues and improve their play. This allows the league to maintain competitive balance and a fresh infusion of new competition every year.

Additionally, through a system of annual audits, every team is assessed by the IAFA to ensure that they have a functional budgetary plan and a sufficient organizational structure. This allows the IAFA to foster and implement competitive parity among the different tiers and to make adjustments accordingly. Ultimately, the IAFA has laid a successful foundation for the long-term presence of American football in Ireland, despite having a bare bones budget.

American football in Ireland obviously does not exist in a fairytale setting. Teams still need to compete to attract athletes from other, more well-established sports. Access to adequate facilities is still highly competitive, with priority generally being given to other sports. Teams still struggle to find the players and IAFA members are not paid. However, despite these challenges, the state of the game in Ireland is vastly superior to what it was before the league folded, and the atmosphere surrounding the sport is optimistic, ambitious, collective, and forward-thinking.

The new powerhouse Belfast Trojans, under the long-term leadership and guidance of general manager Barry Keil and head coach Mark McGrath, are on track to win their fifth consecutive Shamrock Bowl. The Dublin Rebels are the venerable and most storied team in Ireland. Under the leadership of Andrew Dennehy, the Rebels are determined to derail the ambitions of the Trojans and reinstate themselves as the preeminent team in Ireland.

The Trojans, one of only two Irish teams to win the international Atlantic Cup Tournament, are eager to repeat this success in 2016 when they head to Luxembourg to enter the tournament as the Irish representatives. The University of Limerick Vikings were the first Irish team to win the Atlantic Cup in 2010.

Team Ireland is seeking to build on its recent success when it defeated the Greendell Falcons, a Canadian team from Manitoba that traveled to Ireland for the game. Team Ireland now has two components, the Under 20s and the Seniors. Both sides are currently lining up friendly games with the goal of playing against teams outside of Ireland in 2017.

The South Dublin Panthers epitomize the current state of American Football in Ireland perhaps more poignantly than any other team. The Panthers were originally the Dublin Dragons, one of the original 4 teams responsible for the rebirth of the sport after the league folded. However, after years of internal strife, the club chose to redefine itself and change its name to the South Dublin Panthers. Now under the new leadership of general manger Brian Cleary and head coach John Romanoski, the team has new sponsorship, a roster of over 40 active players, and practice in a new, state-of-the-art facility. The South Dublin Panthers have survived tremendous adversity and are unquestionably on the rise with a bright future ahead of them. Their story represents a microcosm of the history of American football in Ireland.

American football is here to stay in Ireland, and the sport has the right foundation, the right leadership, and the necessary support to continue to develop. With these qualities, it’s easy to see why everyone in Ireland is optimistic about the future of Irish football.

As a final word, I would like to give a special thanks to the following gentlemen who were kind enough to speak with me. I would not have been able to share this story without their time, effort and insight. On top of this, they are all outstanding men who deserve to be recognized for tirelessly working to develop and improve the state of American football in Ireland.

-Ciaran O’Sullivan: Founder of the Cork Admirals, former Head Coach of the University of Limerick Vikings, and the current Head Coach of Team Ireland.