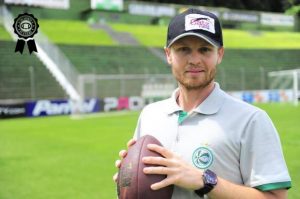 A young, offensive mastermind with an expertise at the quarterback position. A proven winner as a head coach.

Firenze Guelfi: Brett Morgan led Guelfi to a 4-6 record and a berth in the Italian Football League playoffs.

“When I hired Brett Morgan, I saw a young man that had a lot of passion for coaching American football. I first observed him at a coaching clinic and he was very impressive. It doesn’t surprise me that he’s doing so well as a head coach. He’s very organized and a well-prepared football coach because he’s worked so damn hard at it. His personal skills are excellent as well and he’s a nice young man. I would feel comfortable hiring him again and would do it without question.”

“I worked with Coach Morgan while I was in the CFL and was very impressed. I had come up midway through the season and had the benefit of working very closely with coach. I had been with the St. Louis Rams in the NFL early that season and there was absolutely no drop off in the coaching I received from Coach Morgan. His football knowledge and ability to comprehend the offense and relate it to a quarterback is second to none. I was most impressed with his ability to coach in practice which from my experience is the hardest part for a coach. He never overwhelmed with information and was concise and to the point, which kept practice flow while at the same time giving me the information I needed to better myself after a play. Overall I was very impressed.”

“I’ve been fortunate to work with Coach Morgan in Calgary. He’s been a tremendous help to all of the QBs and WRs with communicating and teaching. I’ve learned tremendously from him and we constantly talk ball and bounce ideas off one another, where he does an incredible job in the film room. I believe he has a strong sense of timing and spacing in the passing game and really knows how to attack efficiently in that area. I know he has worked with some really creditable people in this business and I see him being highly successful moving forward.”

“Coach Morgan is a very knowledgeable and dedicated person that has grown as a coach these past two years we have worked together. His ability to connect with players and help them learn certain nuances of the offensive playbooks in days, when it usually takes weeks, was the first indication that he has a unique ability to coach.”

“Coach Morgan gave me the greatest football experience I’ve ever had. He brought us so much knowledge of the game in only six months.  Not only about plays, but also about the football culture. We are now a better team on and off the field. Coach Morgan inspired all of us and made us love football even more. He made us believe that we can build this project. Not only as players, but as pillars of a promising football program. His passion and his will to develop a football foundation here is something that I can’t describe, and this is just the beginning for us. We are working harder, and we thank Coach Morgan for the time we had and all that we learned.”