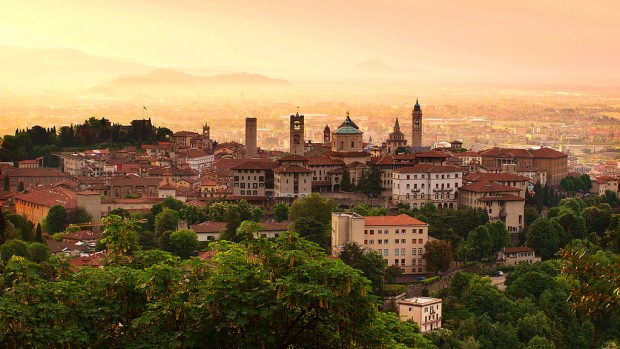 Sunrise in Bergamo, Italy – the location of The Growth of a Game Bergamo Skills Camp.

The Growth of a Game is proud to announce that it will be hosting its first annual developmental camp in Italy this year in partnership with #AssoFootball.

The Growth of a Game Bergamo Skills Camp will take place in Bergamo, Italy from September 17th-18th, 2016. One of the most beautiful cities in northern Italy, Bergamo sits at the crossroads of Switzerland, Austria, and Italy, making it an attractive and accessible destination for players and coaches looking to improve their knowledge and skill level. The camp is limited to the first 120 players that sign up.

In alignment with its primary mission, The Growth of a Game organizes a series of annual developmental camps across Europe in an effort to facilitate the development of American football.

With a total of 7 camps planned for 2016 in countries such as Germany, Italy, Austria, Portugal, and Croatia, The Growth of a Game will be using this year as a platform to expand to 17-20 camps in 2017. The Growth of a Game is the only organization to coordinate this extent of annual American football camps in Europe, aiming to make great coaching more accessible for all players.

The camp will focus on skill development for all players 15 and over. Players of all positions are welcome. The camp includes 3 on-field practice sessions and 2 hours of film study. The majority of camp attendees will be from Italy, Austria, Switzerland, France, and Slovenia, and Slovenia, however players from as many as 15 countries will be present.

In addition to player development, the coaching staff will also be providing instruction to beginner and intermediate coaches in the form of on-field work, film study, and a private coaching clinic on Friday evening.

The Growth of a Game team in Düsseldorf, Germany (Photo courtesy of Manfred Kühne)

Discount codes for Central Hostel BG and Hotel Cappello d’Oro will be provided on the camp sign-up page in the coming weeks. Free transportation will be provided each day by bus to the field from both locations.

Camp t-shirts will be included in the sign-up cost for players and will be provided during registration. Players will wear t-shirts, shorts, and football cleats – no shoulder pads or helmets.

This camp is made possible by the contributions of various partners, including #AssoFootball, the Bergamo Lions, Gear4Teams, Cramer Sports Medicine, Battle Sports Science, Central Hostel BG, and Hotel Cappello d’Oro.

For more information and to sign up for The Growth of a Game Bergamo Skills Camp, please visit: www.growthofagame.com/camps/the-growth-of-a-game-bergamo-skills-camp-2016/