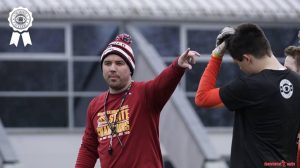 A young, innovative and analytical coach who is a proven winner. Has coached both sides of the ball and can coordinate both offense and defense.

Düsseldorf Panthers: Brian Dobry signed with the Düsseldorf Panther in the German Football League (GFL) to become the team’s defensive coordinator for the 2016 season. He joined the Panther to compete for the German championship in the GFL North division, one of Europe’s most competitive leagues. Dobry left the team after 6 games due to dysfunction within the Panther executive board.

Montini HS: Dobry installed a no huddle, up-tempo, spread offense that ranked among the top offenses in the state of Illinois. 3-time state finalists. Defeated Crete-Monee HS 38-15 to secure the 2015 Illinois State Championship at the 6A level. Achieved a 37-5 record over 3 seasons, including a 14-0 perfect season during the 2015 campaign. 2015 IHSA Class 6A Champions, 2014 & 2015 Chicago Catholic League Green Division Champions, 2013 & 2014 IHSA Class 6A finalists, 2013 Suburban Christian Conference Champions, 2013 & 2015 undefeated regular seasons.

Fenwick HS: Doubled Fenwick’s win total from 4 to 8 games in 2012, completing an 8-4 season. Advanced to the 2nd round of the IHSA Class 7A playoffs. Won the 2012 Chicago Catholic League White Division Championship.

“It’s been a great experience coaching with Brian Dobry. He and I worked on the offensive side of the football for 6-7 years. He was the HC of our freshman team for a while too. He has done a good job balancing his career on different levels. It’s not easy to call an offense. When you have to do it at any level it’s impressive. Brian has a big say and big responsibility in terms of day-to-day technique, position planning, calling the offense, etc. If you don’t love football, you don’t last very long at Montini. It’s competitive, it’s intense. There’s a love for the game that transcends generations.

He’s very laid-back, very intellectual. He always knows percentage-wise what the right play call is at the line of scrimmage. Knows what defense is trying to do. He could also coach on defense and do the same against the offense. Once again he’s a defensive all-area, all-state as a player. He understands defense too. He understands the X’s and O’s. He understands percentages about what is available against a certain look.

When it came to practice, he would have every minute of every practice outlined. If he was coaching RBs that year, he would have the all the individual breakdowns for the position. He would have every front and every secondary charted out, and also pretty well-memorized. When we’d get a certain look, he’d know what the right answer was. He’s highly-organized on the time management side.

“We brought Brian Dobry in because he knows the game really well. Knows offense really well. He’s also ben working on the 4-2-5 defense and special teams. You know when a guy knows football, that’s all he wants to talk about. He’s very analytical and very savvy. He’s a business major from Illinois. You’re hiring a guy that knows the game. You’re hiring a good guy that knows how to treat people, how to interact with people. If I could convince you it’s a no-brainer, I would. I know he’s a good guy, I’ve known him my whole life. When we lost 2 straight championships in a row I knew we needed Brian. I know the importance of him. Montini high school is a top-notch program that is pretty much run like a college. We’re doing some good things.”

“Coach Brian Dobry was my freshman head coach and my position coach on the varsity team. I really liked him – he’s a really nice guy who gets along with all his players. He makes the game a lot of fun. We won the conference championship my freshman year. He’s a great play-caller and gets a lot out of his players. He’s a great fit as a head coach, plus he called the plays on offense and helped out on defense. He taught us how to play loose and have fun. He’s a great role model. I’d definitely recommend him as a head coach candidate.”